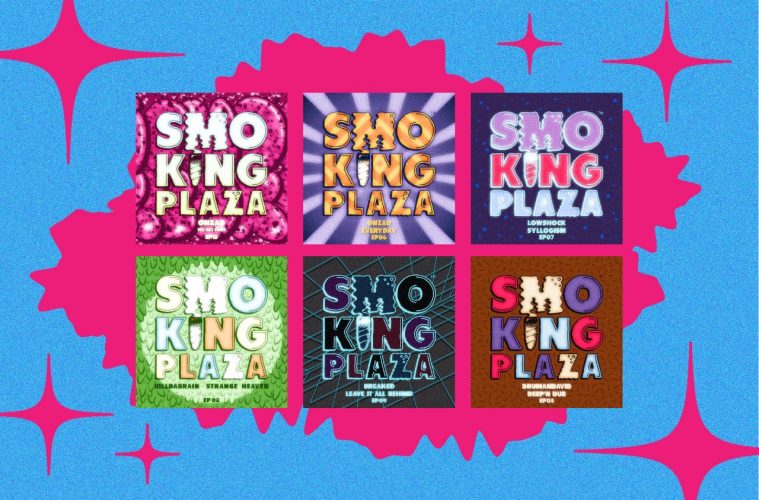 I met Panchi on a beach in Necochea, with a joint in his hand and all of the good vibes that I’ve come to expect from the people in this city. He is, among other things, one of three founders of a drum ‘n’ bass record label, as well as a DJ himself. The label is called Smoking Plaza Records, and over the last five years they’ve put out 17 drum ‘n’ bass albums that encompass a diversity of styles and involve many different artists. All if it’s flama, made with love, and native to Argentina.

We met up in Parque Miguel Lillo, the giant wooded park that is what many would call the heart of Necochea. He spoke to me about Smoking Plaza, the drum ‘n’ bass genre, the local and national scenes, his personal journey in music, and the art of being a disc jockey. When we finished the interview, another friend came to meet up with us, we packed a bowl and got high while listening to Smoking Plaza tracks on a little speaker. It was a good time.

How did Smoking Plaza start?

“We started in 2016, the initial idea was to have a platform where we could cover a type of drum ‘n’ bass that wasn’t really being listened to so much in Argentina, and the idea was for it to be just Argentine artists, at first. These days, we still haven’t put out anything by artists of other nationalities, but we’re hoping that at some point that will happen.”

“This is the first one we put out, it’s a compilation album that has 13 songs by 13 different Argentine artists, and it’s the first of two LPs we’ve released, the rest are EPs, with four songs each.”

Are there any other drum ‘n’ bass record labels in Argentina?

Not that I know of, but there could be. There’s a guy named Bad Boy Orange who’s been in the drum ‘n’ bass scene for a long time, but from what I understand he doesn’t produce; he’s a DJ. I don’t produce music either, but I spin. Actually, I can’t spin the tracks we put out with the label because I DJ with vinyls, and we haven’t pressed any vinyls yet. Well, one time I was able to do it here in Neco with my friend’s turntables hooked up to another friend’s computer, and I pulled up Traktor and played some Smoking Plaza tracks.

In your own words, what is drum ‘n’ bass?

A beautiful genre of uplifting electronic music, that goes hard, and like any genre of electronic music it has a ton of spin-offs, so there’s thousands of different types of drum ‘n’ bass. There’s one genre called Jump-up that’s a more bubble-gummy drum ‘n’ bass, poppier, more teenager. I personally like drum ‘n’ bass that gets liquid and soulful, when it has those little jazzy parts, those female vocal lines, one or another wind instrument, and obviously, the foundation, the bass lines that make up a big part of the songs. Some of the stuff is mind-blowing.

Who are the other people behind the label?

The sello has three owners: David, who is Drumandavid; Adrian, who is Onzad, and me. David and Adrian produce, and in fact they’ve released music quite a few times under our label. I love the shit those two guys do. Onzad has these like little parts of discussion between the bass parts. Sometimes one bass responds to the other like in a conversation. In my opinion, that’s something that kind of ripens as each artists develops.

Because for example, in the beginning, a lot of the artists we represented were going in a certain direction, and then later they realized that they liked going toward a different neighborhood of drum ‘n’ bass even better, and that’s something that you hear often because there’s really a wide array of places to go to find the sound that you like. Also, for the guys it’s often difficult to end up feeling satisfied with something you’ve been working on for such a long time and all of a sudden you have a project that you can’t seem to wrap your fingers around and can’t figure out, and you show it to someone and they love it.

What were you first encounters with drum ‘n’ bass?

It was without a doubt at the beginning of 2000 with a friend who invited me to go see a DJ who I didn’t know at the time called DJ Marky, who is the owner of Innerground Records. He’s Brazilian, his name is Marco Antonio da Silva and we went to see him at one of the “+ 160” parties, that’s what they were called, it’s the bpm speed of the music they play. They used to host them at a place called Bahrein that had these mind-blowing LED lights, it was on Tuesdays. That was my first contact with the genre. And then I just happened to meet Adri right at that time in my life, and he became my mentor of all things that have to do with DJ-ing. So, ever since that moment for me music has been connected with Adri, Onzad.

We’re always connected to music and finding the way to channel that connection is a very personal journey, whether it means finding an instrument or singing or mixing, and be with it (that connection) in the moment. I always liked percussion, and I’ve sat down at a drum kit a couple times, but I never went to classes for anything. When I was little I made mixtapes, when I was 7 or 8 years old I started hanging out with classmates and I would always bring the mixtape cassettes so I could play music. That was around the end of the ’80s. I was born in ’81.

What’s the best way to get into acquiring equipment and playing shows?

The realest way is with vinyl, which is more expensive, more fragile, and in those days we didn’t have the technology that we have today, there were CD players, little sort of computing systems for mixing with mp3s, but Adri told me “vinyl is where it’s really at.” I bought my first turntable in 2008. At the beginning of the summer of 2008, 13 years ago, and I flashed. When I put my hand on that record and scratched, it was like, “I want to do this until I’m not alive anymore.”

Vinyl is beautiful, it’s a sort of therapy for me. I never took music as like, the negocios side of things, or, with the mindset of wanting to promote myself as a DJ, it was always something that grounded me. Coming home from work, putting on my headphones and scratching for like 7 or 8 hours without eating, smoking weed, putting records on, and tripping out.

Claaaro, exactly. Tripping. These days I still occasionally find myself scratching for six hours on end, but it’s probably because I’m at an event and somebody’s paying me to be there. But what often happens, of course, here in Neco, is that it’s hard to get people to pay what it’s actually worth. Me, when I get invited to play, I do it as a gift, last year I would charge like, around 5 thousand pesos give or take, which is a steal, and that’s just the cost to get the turntables there and rent out the equipment. None of the booths have turntables these days, and that’s what’s tough about getting gigs nowadays.

But I mean obviously, if I were the owner of a restaurant or bar, and a kid comes in with his backpack, his laptop, and his controller and plays music for four hours and charges me two thousand pesos, why would I pay eight thousand to a dude who comes with a bunch of stuff, if it’s all the same to me?

When someone comes to me and says “hey, I want you to play this show” I like to know why they want me to play. In many, or most cases, it has to do with the sound quality, fortunately, because they catch on to the fact that there’s a lot of variety of sound quality, the lows when you listen to a vinyl are not the same lows you get when you listen digital, like when someone’s playing off Traktor or some other program.

I mean, I’m not saying that it’s a bad that they do that, I think people should do whatever makes them happy, it’s fine, and in my case, since it’s not something I think about as a business, it doesn’t bother me, they can do whatever they want, they can call themselves DJs. But they’re not. They’re selectors. But anyway, I like that I’m starting to see a spark of consciousness, I know two young kids who recently started mixing with vinyls, whereas before they had always mixed digital, I saw on someone’s story the other day, someone was putting their hand on a record and I was like “yes, finally you’re catching on, dude!“

Where did the name Smoking Plaza come from?

Because Adri and I are total stoners, and the concept of plaza is related to that. It was alway the hip thing to do to get together in the plaza, which is what the park is like here. And the beach, too. If the label had been formed here, with two other Necochenses it would probably be “Smoking Playa” [laughs] or “Smoking Beach.

But yeah, the fact that there’s a reference to pot goes hand in hand with the concept of the plaza and its place in Argentine culture – meeting up in the plaza. When I was a kid I would come to the park with my soccer ball and people would come out of nowhere and we’d play together, and, well, that’s what it’s about. And the concept of plaza connects a lot of people through music, too.

Once, a couple summers ago, I was wearing one of the t-shirts here in Neco, and this kid comes up and says “yoooo, that’s a sick label!” and whatnot and I started giving him stickers like “that’s awesome that you’ve heard about the label, dude!”

But it’s a scene that really isn’t so mainstream, it’s super underground, and we like it that way. Maybe it would benefit us if it became mainstream, I don’t know, but for now it’s awesome just staying the way it is, underground. Let the people who need to find it, find it, and those who need to consume it, consume it.