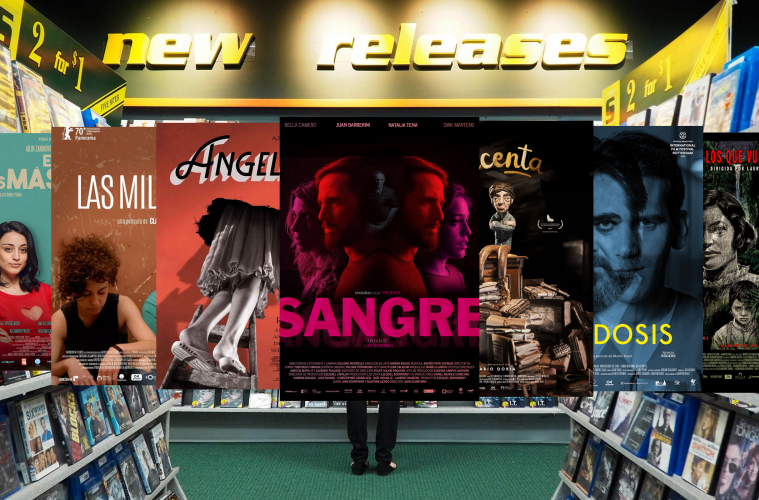 Off the Marquee | Streaming Film Picks for January 2021

Wake up! It’s 2003. There is no global pandemic. There is no social media. There is no Trump — well, he exists, but he’s just a reality show star with ridiculous hair. It was all just one long, messed up, unusually detailed dream. Yes, the world is still mired in chaos — when is it not? — but viewed through the lens of nostalgia, things are generally better than the hellscape you dreamed up. Oh, there’s also no “streaming” — what’s that? Nevermind, just get out of bed, Dad’s taking us to Blockbuster to rent a movie!

It’s nice to entertain those scenarios. We’ve all seen the memes. But we actually do live in the here and the now, confined to our homes, glued to devices that continue to desensitize us to the absurdity of the world, and accustomed to the idea of streaming digital media. There are no more video rental stores — if a few stragglers survived due to sheer nostalgia, they’ve been effectively killed dead by the virus. And, at least in Argentina, there are no movie theaters. At least for the time being. Thankfully, though, there are still new releases, and we can use our imagination to pretend we’re walking the halls of Blockbuster, scanning the shelves for that perfect pick.

The movies below are new Argentine releases available on the Cine.AR platform. And though Cine.AR has a host of free content, each of these new releases costs a paltry $30 pesos to rent. Think about that for a moment. 30 pesos. That is nothing. We’ve talked about Cine.AR before, and the important role it plays in the digital distribution of Argentine cinema. They deserve our patronage, and so do these excellent films. Signup is free, and we’ve provided links to each individual streaming page. So pony up and get to watching.

Juan Schnitman’s Sangre is an erotic thriller centered around a deeply dishonest piece of shit who can’t stop fucking up. That may not be what the official synopsis says, but it’s what you’re getting. Fernando, said dishonest piece of shit, moves to Rosario to work in an oil tanker, where nobody really likes him because he is a piece of shit. He starts a relationship with a sweet Brazilian girl he meets. But! He also reconnects with his Spanish ex girlfriend. When they both get pregnant with his child, things escalate quickly into a whirlwind of lies, confrontations, and violence. This is one of those situations where ethical non-monogamy would’ve fixed everything. This is why nobody likes you, Fernando.

This is a wonderful little movie we had the pleasure of seeing at last year’s all-digital Mar del Plata film festival, so we’re glad it’s getting a wider release. Shot in the streets of Corrientes, Las Mil y Una follows Iris, a 17-year-old girl who’s been kicked out of school and whose life opens up after meeting a bold and confident new friend. The new film by Clarisa Navas seems to be a deeply personal coming-of-age story, a piece about young love, identity, figuring out who you are and who you want to have around you, as well as the ways in which seeing yourself through the eyes of others can aid in constructing your own sense of self.

Here’s a movie we actually got to see live in a theater, when conditions actually allowed us to sit side-by-side in a movie theater. Lausa Casabé’s Los Que Vuelven is a period piece set in the early 20th century. It tells the story of a woman who invokes mysterious supernatural powers to bring her child back to life, leading to horrific consequences. At its heart, it’s a story about colonialism, about class struggle, and about genocide. This movie is spooky. It is violent. It is… sometimes confusing due to its non-linear narrative, but by the end you get a full sense of exactly what’s going on (this is not Tenet). Definitely worth a watch.

Another film-festival favorite that we got to see projected before our very eyes, the winner of the Argentinean competition at the 2019 Mar del Plata film festival. It’s great that it’s finally getting a wider release. Delfina Castagnino’s Angelica is one of the most quietly disturbing movies I’ve ever seen, bringing you deep into the mind of a woman whose life is rapidly crumbling around her. Angélica, the titular character, is on the verge of losing her mind as loss of her mother brings old traumas to the forefront. Suffering from mental illness and oppressive loneliness, she is haunted by ghosts, memories, and grief. The film does an incredible job at bringing the audience into this state of mind, and as Angélica makes the decision to tear down her old family home, so does the audience see her life crumble into debris.

Healthcare workers are a tremendous force of good in the world. Especially in turbulent times like the ones we’re going through right now, we trust them with our lives, and we are extremely thankful for their support. This is why the very idea of one of them going rogue to kill his patients is so profoundly disturbing. It’s this uncomfortable dissonance which runs through Martin Kraut’s La Dosis, a pitch-black thriller about a nurse who works the night shift and becomes involved in a cat-and-mouse game when one of his coworkers figures out his secret: he’s been going out of his way to put certain patients to sleep. Yikes, guy!

Claymation is extremely cool, and immediately brings to life certain film genres and tones. But Dario Doria’s Vicenta goes a different way. It’s an interesting experiment, a type of documentary-via-animation. The director uses these clay figures to tell the tragic real-life story of a girl who is sexually abused, her mother’s right to get her a legal abortion, and all the different societal forces at play that attempted to block those efforts. An utterly unique film, more than worth a watch.

Look, we’re aware that this selection has been a little… dour. Tense thrillers, tragic dramas, horror movies about grief, and even the one animated film is actually a super sad story. So let’s end our list with a dose of lighthearted comedy. Daniel Pensa’s El Amor Es Más Fácil is a classic rom-com in every sense of the word. Everything from each lead’s individual relationship falling apart leading to a meet-cute leading to a burgeoning relationship and eventually leading to complications and dramatic choices. All the while, there’s a lot of charm to be found in this winsome little film that reminds us of the small thrills of falling for someone. And meeting strangers at bars. God. Remember bars?!