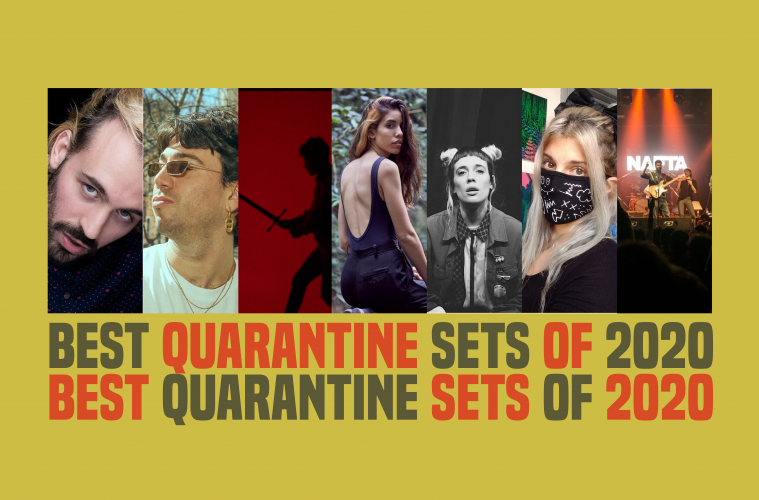 2020…What a year it’s been. While I could talk about how it’s been a rough year for the music business, I think it’s much better to point out how everybody involved in music-making has adapted so well after being dealt such a terrible hand. Just as you, dear reader, we were gutted to realize we wouldn’t be able to attend any shows during the better half of this year.

But artists found a way to push through – as they always do, and have brought us an amazing array of live sets: sometimes at their houses, sometimes at empty venues. Regardless of how these were put together, there were some truly amazing sets. Here are 2020’s best “live” sessions:

It’s not a surprise that neo-soul outfit NAFTA, delivered such a heart-warming and laid-back performance. They’ve been making waves ever since their debut self-titled last year. Instead of going with a full band performance, NAFTA opted for an intimate 3-song session in a dimly-lit living room filled with cigarette smoke, as rain fell softly outside. The set includes acoustic renditions of “Vos No”, “La Carta”, and “Vení Mira” and what’s most commendable in all these versions is the astonishing musicianship. The rhythmic cadence is expertly managed with just an acoustic guitar as its sole backbone. Meanwhile the harmonies – man, the harmonies elevate these tunes from just some friends fooling around in their living room to a performance worth a few tours around every single Argentinian province.

Conociendo Rusia is one of those musical projects that sits between the classic rock songs of the 90s and late 80s and the new indie-rock scene. Rather than becoming copycats of these styles, they’ve managed to balance the best of both worlds. Their funky and jazzy vibes work in tandem with some of their proper rock tracks to bring us a breath of fresh air. Coasting off their latest release “Cabildo y Juramento” and in light of the pandemic, they released an amazing live set with songs off their last album and some deep cuts from their self-titled debut. The arrangements and instrumentation are spot-on in both stadium-rock anthems such as “La Puerta” and more subdued and softly-spoken tunes such as “Cosas Para Decirte” – a powerful rock ballad. Conociendo Rusia’s E-World Tour is a perfect example of what qualifies as a well-produced quarantine session. Certainly, it acted as a balm for venue-goers at the time of its release but it stands the test of time as a great show in and of itself.

This one’s a really special set. Marina Fages has been releasing music way before her debut record “Madera Metal” back in 2012 with her band El Tronador. With her latest edited material, Epica y Fantastica, we were eager to hear what Marina was preparing for 2020. Of course, as we all know the pandemic hit everybody pretty hard and our expectations plummeted. Fortunately, right after the lockdown was announced, Marina gathered a recording team and released her very own quarantine session. Vivo en Piyama is an intimate look into Marina’s apartment as much as her soul. The slow camera pans and Marina’s voice evokes a feeling of urgent melancholy. Armed with just a nylon string guitar, she takes us around versions of some of her most iconic songs. This set, its music, and its vignettes of a world in a sort of stasis are truly a highlight during these terribly uncertain times.

This -dare I say movie- by Mariana Michi is a delight both to watch and listen to. Mariana Michi has participated in many bands such as the electric garage-punk trio MUGRE as well as her old-timey band Miau Trio. In 2018, she released her aqueous debut record Cayó el Valiente to critical acclaim. This year, Mariana took everyone by surprise when she announced La Paz Obligada, a movie where she plays songs of her record as well as some covers with loads of guest artists such as Loli Molina and Julieta Venegas, among others. The set features Mariana in different surreal situations, with her guests appearing on TV screens all around her and astonishing lighting effects illuminating Niceto. At times it reminded me of what Radiohead did during their latest A Moon Shaped Pool tour. We strongly suggest you check this session out before the 31st of this month, as it will be taken down after that day. We hope it eventually gets uploaded somewhere else, as it’s something nobody should miss. For more on this, check out Emi’s interview with Mariana herself.

El Mató A Un Policia Motorizado has become an iconic part of the early 2000’s zeitgeist of Argentine indie rock, remaining a staple feature of the scene without losing the edge which many other legendary bands have fallen victim to in the past. In this short, sharp, and sweet performance from the La Plata rockers we bear witness to their electric performance from earlier this year at the Cosquín Rock festival held back in early February. It’s a welcome reminder of the solidarity and kinship that rock in Argentina has brought to many generations. It’s also an image locked in time of people vibing out to a band of epically tight proportions. It also should be noted that El Mató is one of those bands who consistently perform with ferocity as if every performance is just as important as the last. Santiago Motorizado belts song after song with a grave beauty mixed with delicate harmonies while Willy (Doctora Muerte) delivers a blistering run of firm beats with vicious fills breaking the driving rhythms which carry the band through each equally anthemic track.

Centro Cultural Recoleta came in thick and fast with their quarantine live sessions giving us beautiful performances from Montarosa and Jazmín Esquivel in September. Whether performing solo or accompanied by a band of local talents from her inner circles, Montarosa is a BA staple. Hence this showcase echoed her infectious energy despite the limitations of sitting in front of a screen. There is a particularly heartwarming back and forth mid song between her and her guitarist with a shirt draped over the stage with the name of the late Rosario Bléfari, an iconic tribute to an equally iconic performance.  This set was followed by an electrifying performance by Jazmín Esquivel, who brings her own unique stylings of electro-pop dominated by lush synths, robotic drumming, and haunting guitar lines. Her stark departure from her origins working within the realms of folk is a welcome introduction to her new album, set to be released through Discobabydiscos shortly. Her latest singles “El chico de la película” and “Misiones” give us a taste of all the good to come.

Every city has its pinnacle point of cultural birth. El Panda Rojo is to Buenos Aires what CBGB’S was to New York . In this first edition of Festival del Once, artists from across the spectrum(Nahuel Briones, Jaz Pimentel, and Tomas Porcelli) put on this show to help both artists and the iconic El Panda Rojo stay afloat. But this was not merely a telethon for the sake of salvation. We were blessed by a group of passionate performers who showed their love for a place that hosted many a mythical show to the crowds who flock to their doors. The noteworthy performances of Nahuel Briones, Laura Vallacco, Les Pájares, & Al Vacío Trío in no way overshadow the other performances which are equally as unique and as compelling as the last. Treat yourself to what will hopefully become a new annual expression of the diverse nature of this city’s music scene.