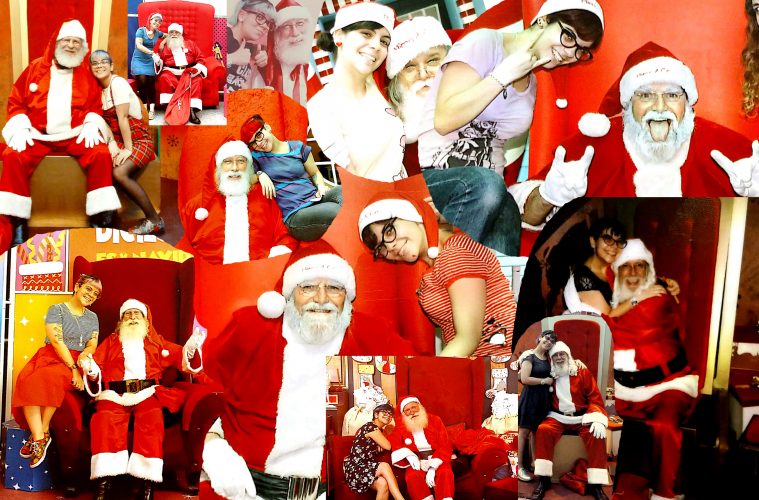 Christmastime, Expectations, and Shopping Malls | A Letter to Santa Claus

How are you? Feels like it’s been forever since I last wrote to you. Between the advancements in technology, my annual visit to the shopping mall to get our picture taken, and the fact that you don’t really exist, I fell out of the habit of writing you letters.

But here we are. It was an extremely unusual year, so I’m going to do something unusual and write to you again. I feel like this is the year to do it.

First of all, I wanted to thank you and all the other magical beings who have apparently been on my side this year. I really cannot complain. This year was a jerk to everybody but I came out okay. Clearly 2020 sucked, but it was nothing compared to 2007. Someone once said “what doesn’t kill you makes you stronger” and we’ve been parroting it ever since. Truthfully, what Nietzsche meant was “what does not kill you hurts you seriously and leaves you so beaten up that then you accept any type of abuse and tell yourself that it makes you stronger.” Let’s hope we’re not so beaten up that we end up accepting anything and believing ourselves stronger.

Did you know that this would have been my tenth consecutive year getting my picture taken with you? I’m still not sure how this self-imposed tradition got started. Because looking through my childhood photos I couldn’t find a single photo of us. I do remember that my grandmother took me to see you when I was little. My parents worked, so my grandmother Juanita was in charge of the Christmas magic. We took a bus downtown, which for me was like going to Mar del Plata. We would arrive at Harrods, which was already beaten up and half abandoned at that time, and we would go to see you at the top floor.

I was (and still am) very short, and they always pushed me towards the front of the line. That meant letting go of my grandmother’s hand and going alone. For me, Harrods failed because of bad karma. Because, for some reason I’ll never understand, they always set up terrifying labyrinthian mazes to get to you. I got over my fear and put on a brave face. Because showing my fear might mean they wouldn’t let me see you…  well, you can see that what didn’t kill me did in fact make me stronger.

I think that memory of visiting you at Harrods spawned my subsequent fascination with Christmas and that desire to go visit you every year. Because I actually knew the truth about you when I was very young. Thankfully my mom found the best possible way to put it, which has allowed me to continue “believing” in you even today. She said “it’s not that Santa Claus doesn’t exist. Santa Claus is an illusion, so he will continue to exist as long as you want.” So here I am, 33 years old, opening my heart to you.

For 10 years now, every December I wait patiently in line to see you. There, camouflaged among the children, before the incredulous look of parents, who do not understand why an adult with no children of their own is doing there. Because sometimes the line to see you is longer and more daunting than the time I had to wait in line for tickets to Madonna. I am not complaining anyway, because waiting in line is now one of my favorite parts of the Santa experience. I like to chat with the other children, because there it’s like I am one of them.

We chat about what we are going to ask you. Some tell me that they are a little scared and I tell them that there’s nothing to be scared of, that you’re super cool. Sometimes, some of the moms in line will tell me their secrets, like the one who confessed that the Santa at the DOT shopping mall is the best one. Or they gesture at me to try to help lower their kids’ grand expectations. In line I am like an undercover agent, playing for the side of magic. After a while I figured out I had to start wearing my own Christmas hat. You may or may not be real, but the lice epidemic is. Some elves told me as such a few years ago.

When it’s my turn to go up, my heart starts beating super fast, just like when I was little. I come up to you, greet you, and chat with you for a bit. You know, that I know, that you know, that I know. But we are both there to hold up our own illusion, as well as that of the kids who are there watching. There were times when there weren’t that many people around and I managed to make you break character for a photo. But I think it’s important to keep up appearances when we get together, because we don’t want to set a bad example. Even so, I will forever treasure our photo throwing up the heavy metal sign and sticking out our tongues. Speaking of bad examples, a few years ago I saw a lady run and jump up on your lap. It seemed a bit strong to me. You may be Santa Claus, but you’re not made of stone. How did you carry on after that? I’ve gone to see you with a lot of my friends and we would never have dared to do that. That lady was way out of line.

The truth is, Santa, that I admire you and appreciate you very much. A couple of years ago I saw Néstor Frenkel‘s documentary Todo el Año Es Navidad (currently available on Qubit) where they interviewed a large group of gentlemen who are responsible for playing you. They told their story, which in turn is yours. That moment when they felt the call to be Santa Claus (some quite literally). And beyond how beautiful and comforting it was to see all their stories, it also made me a little sad. I will never be able to play you. I really wish I could do it sometime, but I just don’t have the physical attributes. Maybe one day I could be one of your elves. But I don’t think I can aspire to much more than that.

You are Christmas. And people may say that you were invented by a Coca-Cola marketing executive or that you are a representation of rampant capitalism. But for me you represent magic, you are my grandmother Juanita holding my hand tight, my mother letting me choose to believe in the illusion of your existence, the love of everyone who ever accompanied me to see you without judging. To me, you represent everything that is good. You are the part of me that is wortwhile, the one who lets her guard down and doesn’t feel the need to respond to everything with a snide remark. The one who allows herself to speak as equals with any child who crosses her path. And above all, the one who allows herself to be a little less pessimistic, and believe that things can be better. Even if it’s just at the end of every year.