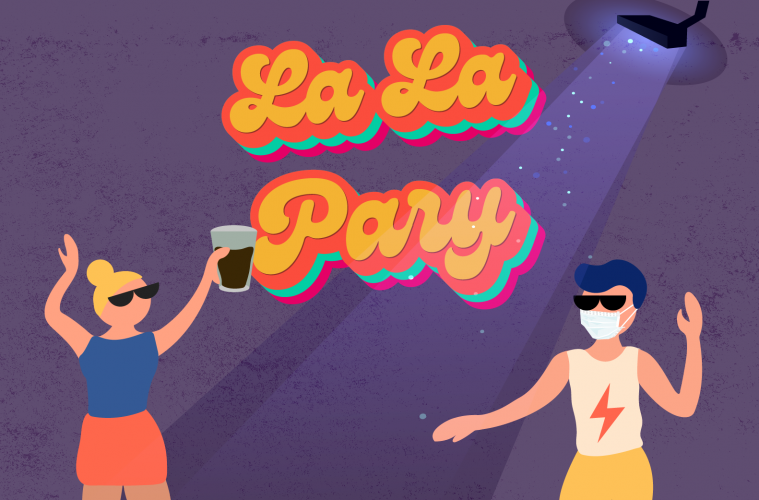 La La Pary | 9 Songs to Get Your Groove On

Ahhh the good ole fashioned apartment house party. That weekend release complete with all of the classics like the earth-shaking bass, running out of ice, and tripping over stuff because it’s so damn dark. You’ve been looking forward to the “pary” all week. Now it’s two hours away and for some reason all the paja you’ve ever had reunites for one last job, Ocean’s Thirteen style: you have to find the perfect music.

As the host you’ll find yourself chatting with friends, fernet in hand, and you’ll stop and think “Wait a minute! Is everyone having a good time???”

Hell yeah, they are.

We’ve created a selection of stellar dance party anthems for you to enjoy with a good-time guarantee. So crank that volume up to eleven and let’s get grooving!

Check out in the playlist below, and maybe even follow us on Spotify? I mean whatever, we don’t mind…

You’ve got a dance party? Put on Valdes. It’s basically a default at this point.

This pop tune by the Cordobés duo has some house vibes that make it a great ice breaker. It’s the kind of song that you want to make a grand entrance to, instantly reassuring you that indeed, this is going to be a great night. The loopy nature and catchy melodies soothe you into the social butterfly mood as you make your way from flower to flower greeting friends and deciding which drink to treat yourself with.

You’re already loosening up and you need a song that matches that light and comfy mood you’re getting into. As you’re catching up with that friend you haven’t seen in a while, you recognize a cute little beat that starts playing with a glossy melody that almost reminds you of a Christmas carol. This hit is the second single from Angela Torres’ first album, a fresh and fun-loving approach to trap that glorifies friendship. In other words, an absolute no-brainer for partying.

Va cayendo gente al baile and the dance party has officially begun. It’s time to put on some reggaetón and move your hips so hard you’re actually going to wonder if it’s still 2008.

“Lento” is Eve Calletti’s take on the sexy and free-spirited genre. The Mendocina artist, coming from a low-key hip hop and rap style, brings a lyrics-focused spin. This is especially evident in the extra catchy chorus that you’ll find yourself singing along even if it’s your first time listening.

Staying on the reggaetón bandwagon, pop on this jam from the bonkers-bananas-crazy, but always endearing, LOUTA. His masterful music is truly worthy of a chef’s kiss.

This a very simple song in the best of ways; just what it needs be and nothing more. Weird and lively, (complete with a chorus in French that makes absolutely no sense) “COCO SHANEL” carries the fanciful expression of its artist and shares it with everyone in earshot. So yeah… the party’s getting pretty wild at this point.

This song is pure power. It comes at you like a stampede, a swag-filled stampede. This trap track has a certain summer pool party vibe that is sure to lead you to the peak of the night. When this tune comes on there’ll be a collective feeling that we’re all on a roller coaster approaching the top of the steepest hill. This song has it all, from an appearance of our boy LOUTA (yes, he’s back in the list already) to a Britney Spears reference.

Let’s get back on that reggaetón bandwagon real quick. “Preso” is the fourth single from Male Villa’s sublime debut album La Negación, which is a total dance-fest in and of itself. This song is a snappy ride that features a great back and forth with Juan Ingaramo (yes, he’s back in the list already).

Fun fact: The laws of nature make it physically impossible to NOT dance while listening to this song.

For his second single, ¿Juan Julian? (solo act of Padi Andersen, bass player in the rock band from Mendoza, Trílicos) decided to jump on board our famous reggaetón bandwagon. The outcome is this crazy creature of a tune that is deeply experimental and fun every step of the way. The kind that has everyone in the party frolicking madly and later they’ll say “what was that one called?” and demand a repeat performance.

Gativideo feels like the four goofballs that said they couldn’t come to the party but then show up out of the blue and end up being the secret ingredient you didn’t even know was missing.

“Bruce Willis” is arguably the groups crowning achievement so far. An outlandish disco vibe, flashy synths, and downright ridiculous lyrics with a striking high energy. If there’s ever a pogo moment at a party, this is that moment. Bake an “Im sorry” budín for you neighbors later.

Things are slowly wrapping up and you need a bit of a breather. No better company than the dark and sexy soundscapes of Francisca Gil, aka Chita. “A la Noche” is on her first full album Encanto which, as described by the artist herself, fuses R&B with urban rhythms. This song paints a gratifying and almost somnolent picture that you can pleasantly sink yourself into. You’ll focus on the entrancing lyrics “a la noche ella tiene otro encanto,” as you being to melt into your sofa.