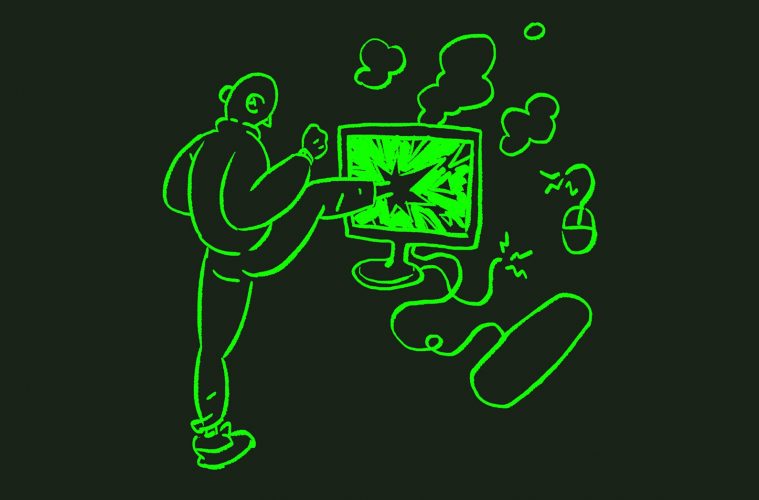 Ltd Edition | Indie Comics in The Year We Became Cybernetic

Being the last installment of the year, I wanted to use this opportunity to share with you some 2020 digital releases that were left out of previous articles. These projects were not mentioned in past months due to our focus on the few physical releases we had this year, as a kind of encouragement to the struggling industry. Releasing new material on paper, in a year without a circuit of fairs or events, became an anomaly worth celebrating.

But if there’s one thing that is going to mark my memory of this year, it was the progressive evolution of our ways of linking to virtuality in a context of great need; in our personal ties, in our work activity, in our cultural consumption. Concerts were transformed into streaming sessions, film festivals were attended through our computers, and comics were no strangers to this migration. In an environment that still falls somewhere between cult and mass consumption, the loss of comics fairs and events created a black hole that is still difficult to fill today. But the counterpart to the unease caused by social isolation was the evolution of publishers and illustrators towards different ways of producing material.

In previous years, the consumption of comics in digital format was minimal when compared to paper. But the need arose to adapt to the times and find new ways to connect authors and readers. In the second half of the year, more and more projects designed purely in digital format started to appear. Not mentioning them in this space would be to only tell half the story of how the independent comics scene survived this 2020.

Since June, the workshop Proyectos Dibujados taught by El Waibe (illustrator and editor of Wai Comics) began to upload a series of talks with illustrators in podcast format on Spotify, in which he and the students attended virtually. Having transitioned his face-to-face workshop into a video call format, he began to invite different illustrators and cartoonists to share classes with the attendees so that they could discuss their way of approaching drawing, their obsessions, and the idiosyncrasies of each author’s way of illustrating.

These exchanges resulted in organic interviews, where the curiosity of the participants and the transparency of the interviewees when sharing their work processes and current projects created a different way of relating to the work of the authors. Both sides of the conversation have their importance in the podcast, with the questions of the workshop students guiding the conversation, and they even draw the interviewee in their personal style each episode. In these months, Proyectos Dibujados functioned both as a form of company and entertainment as well as a new window into each author’s universe to learn more about the details of their work. Great to listen to while scrolling through the instagram account of the artist being interviewed.

Returning to digital comics, September marked the fourth installment of Revista Fierro, this time in a purely digital format. La Fierro occupies a place that’s at times uncomfortable but always central in the local comics scene, and although we could not classify it as an “independent comic,” its list of authors includes series and short contributions by authors that belong to the DIY comics world. Depending on subscriptions as a model of sustainability, this new stage of Fierro magazine wants to bring comics published decades ago together with unpublished comics and first works by emerging authors, and it’s the latter that I want to bring to your attention.

Among the unpublished works that are being uploaded online as monthly chapters, we have the post-adolescent diary of Carolina and her inner demons in Inframundo (China Ocho), a story set in the Ushuaia prison in El Pozo (Kundo Krunch and Santiago Sanchez Kutika), the dream duo of the police noir en Saturno (Matias San Juan and Pablo de Santis) and the new episode of the story of Dora in her unwavering search to bring the Nazi regime to justice (Minaverry).

In the publishing field, this year also produced new material in a purely digital format. In the case of Deriva, not only did they publish a comic that’s perfectly attuned with the apocalyptic climate we are living in, but they also released a second edition of their Deriva Online annual anthology of comics in PDF format. Being a young label and with an editorial line that embraces experimentation in the medium, they’d already produced a purely digital anthology last year.

This 2020, having learned the formula and the ideal conditions to publish digitally, the editorial Deriva created a thematic nucleus around the Error. In the words of the editors:

“In a year where all the plans seem to have the urgency to find new ways to be mobilized, where it seems that nothing takes its expected course, we find it interesting to generate a magazine that thinks about the diversity of error. Not as a wall that stops the processes but rather as a new path that extends into unknown areas. In times where everything seems to go wrong, what other possibility is there for us but to embrace the glitch?”

The result is as eclectic as it is hypnotic, with contributions from young authors applying their talents to celebrating the multiple meanings of “Error”.

Finally, in my personal experience as editor at Clan de Fomento, this year meant a process of adaptation, of postponing previously scheduled plans and transforming stillness and confinement into a motivation in the search for new forms and methodologies to keep the desire to produce new material alive. That process led us to partnering with Barro Editora in the assembly of a project that we call Guiso, a bimonthly genre anthology publication that had its first horror-themed issue in October.

To free myself from the tangles of subjectivity that commenting on its content would imply, I prefer to leave you two reviews from esteemed colleagues in this regard: one by Matias Mir for Zinerama and one written by Demian Urdin for Blast magazine in Colombia. From the editorial seat, the experience of coordinating a publication with 10 authors through video call meetings proved to be as strenuous as it was joyous.

Nobody knows when we will return to the “old normal”. Nor do we know if these explorations in digital formats will be temporary adjustments to confinement or the new standard in distributing material from independent authors. What we do know is that these digital projects represented a way for authors to come closer to a public who was itching for new stories. I bid you farewell until the next Ltd Edition, the first of 2021, that I hope will find us less isolated and with more exciting works to review.