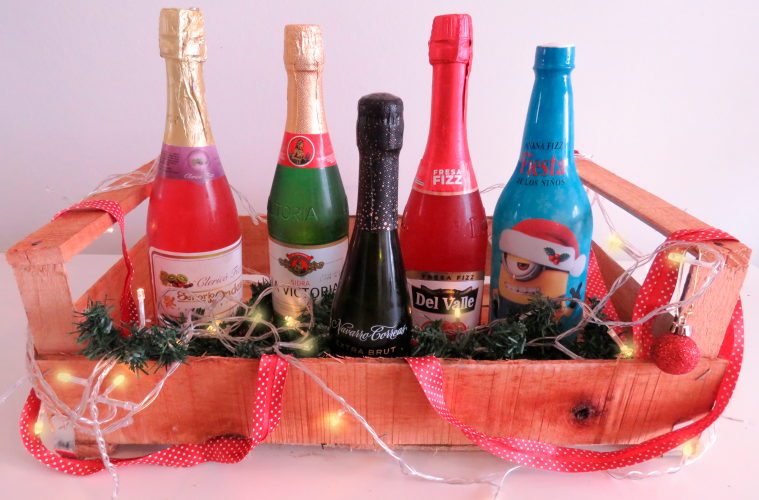 Chin-chin for the holidays | We taste 5 traditional Argentine drinks

Ahhh, the holidays. That time of the year when we slowly wind down our productivity and instead shift our focus to our expectations for the coming year. That time when our feeds are filled with end-of-year summaries, never-ending posts read only by aunts and grandmas. And this year, everything will be enhanced by the feeling of freedom that the DISPO has dispelled on us this summer (be careful, you guys).

Wherever you go in the world, there are sights and traditions that make these days different from the rest. In Aspen, it’s the snow. In London, the city is littered with lights and effusive decorations. In Argentina, we’ll spot inebriated, shirtless men wearing the typical red and white hat, wandering the city in search of adventures. These are the little things that bring us joy in this very special season.

No matter the tradition, this time of the year transports us to feelings of festivity and celebration, bringing us the Christmas dinners and family gatherings we count on to close the year with a  toast or two (especially THIS year, which desperately needs to end). To prepare for all the “chin-chins” that await, we’ve decided to enter the classic festive drinks Pantheon with the aim of reviewing and classifying them for you all.

Here are the completely arbitrary parameters we’ll be using:

Right of the bat, it shows itself as something menacing. It’s got a vibrant almost opaque-ish red color and a cough-syrupy thickness, which makes it a less-than-appetizing product. Regardless, we tried it -thus reaching the peak of investigative journalism? Perhaps.

It was relatively easy to drink, though it looked and tasted like a melted strawberry popsicle. The alcohol proof is relatively low (which might be good or bad depending on the person) and it’s almost imperceptible when you drink it.

-Taste is alright, given the fact artificial strawberry flavor is something we are all familiar with.

-If your palate is used to high-quality drinks, you’ll wish you were dead.

-It’s got “fizz” in its name but there’s no fizz to be found.

Family Member: Your aunt who didn’t know what to bring.

Probably the most falopa beverage (and also the most boring cause “non-alcoholic”) we’ve tried. The minion featured on the bottle looks both intimidating and inviting, enticing us to try what’s inside. A shared sense of complicity that is ultimately wasted considering it’s a kid’s drink.

The pineapple taste is a tad more acceptable than we expected, although we don’t recommend drinking more than one glass because the high sugar content can make it cloying. This very same thing is what’ll make it attractive for the little ones in the family, who’ll feel included and happy to see a friendly face on the Christmas table.

-It’s got an original minion with an official Universal Studios logo on it, which instills a certain level of corny credibility.

-After midnight, the sight of a minion might seem a little hostile.

-It’s neither soda nor juice. It’s an in-between nothing substance that hurts our souls.

-Family Member: Your hyperactive nephew who’d drink half a glass and go wait for Santa to arrive

“If it’s clear and yellow, you’ve got juice there, fellow! If it’s tangy and brown,you’re in Cider Town!” – Ned Flanders

Cider has been and will always be the mothership of all Christmas beverages. Whenever we catch a whiff of its distinct smell, we’ll be automatically transported to December and being surrounded by matambre, ensalada rusa and vitel toné drenched in mayo. Ahh…life’s small pleasures.

There are those who say that apple cider is the closest man has ever gotten to recreating and bottling Santa’s sweat. In regards to these declarations, we have nothing to offer. What we can say is that it’s a virtuous and budget-friendly drink, and you won’t be blowing your aguinaldo on a bottle.

-The right amount of bubbles.

-Slight and elegant reminiscence of apples.

-It gets you in the mood relatively quick (instant buzz).

-You’ll be dancing Leo Mattioli right after the toast

-Your uncle might down 4 bottles even before the vitel toné is served.

-You’re going to need some heartburn medicine on hand for after the celebrations.

Family Member: Your mom, who bought and stored away 6 bottles of the stuff in October.

Also known as “The Nectar” by yours truly. A virtuous beverage that can be achieved when fruity syrups and essences are mixed together. The label says it’s pasteurized, which both confuses and comforts us at the same time. Its taste is solid, and it is reminiscent of a drinkable fruit salad mixed with booze.

Just like with the strawberry fizz, its color looks pretty sus and even slightly radioactive, a detail we wanted to point out but isn’t a deal breaker since this is the case with most festive drinks. This one doesn’t get as much love as pineapple fizz and apple cider in Christmas dinners, but it’s still got a place in our hearts.

-A fruity taste without getting way too artificial

-It’s not a drink you’ll get drunk with.

-Could have a stronger flavor.

Price: 79 pesos (if you’re the proud owner of a tarjeta Dia%)

Family Member: Your grandma would buy it.

Basically, a sparkling wine that looked like champagne and ended up being an objective disappointment in both departments. The bottle we got – which was a huge production, by the way, had less than half the amount of product as the rest of the drinks we tested for this article. Still, it was the most expensive of the bunch. Because of this, our expectations were pretty high.

We encountered a strong bitter taste, only for audacious palates. It was really frothy, surely more than the previously mentioned beverages. Its scent reminded us of nights full of bad decisions (those nights that end in loud vomiting on a conurbano dance club’s sidewalk) which we didn’t find attractive at all.

The bottle was a highlight, that was nice.

-It’ll get you shitfaced in no time.

-It has a certain aura of sophistication, aesthetically speaking.

-It’ll get you shitfaced in no time.

-Not recommended for casual drinkers

Family Member: Your dad, who wanted to get something fancy this year.

These are just some examples of different drinks we could get our hands on at this wonderful time of the year. Feel free to question our points of view or suggest more beverages or other Christmas stuff you think need a place on LLL.

Make sure to read our other reviews of national products such as chocolate milk, candy, and dulce de leche!