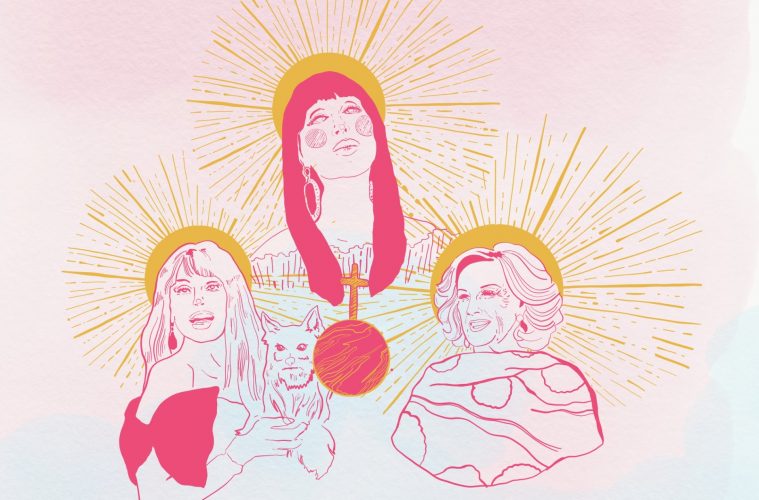 On this installment of the series of articles that could well be titled “Argentines and Their Celebrities: What Do They Know? Do They Know Things? Let’s Find Out!” we are highlighting a triad of women. What sets these women apart from the other celebrities I’ve written about? For one, they’re still alive, which is not a minor detail. Secondly, they are not Ricardo Fort. And thirdly … I don’t especially like them.

Why would I write about people I don’t like? Well, it may be dirty work, but someone has to do it. I also find this Erasure-style “love to hate you” relationship that we have with these ladies interesting; how they seem to be such contemptible beings, but at the same time we can’t help but want to keep up with everything they say or do.

So prepare to be evangelized about the holy trinity of Argentine divas: Mirtha Legrand, Susana Giménez, and Moria Casán. We’ll cover the good, the bad, and the memes.

Rosa María Juana Martínez Suárez, aka La Chiqui, aka Mirtha Legrand, was born over ninety years ago in Villa Cañas, province of Santa Fe. She was nicknamed “La Chiqui” since she was the youngest of three siblings: José Martínez Suárez (her older brother, by far my favorite Martínez Suárez) and Silvia Legrand, her twin sister, also known as Goldie. The three siblings dedicated themselves to cinema, José behind the camera and the twins in front of it. She made her debut in the 1940 film Hay que Educar a Niní starring Niní Marshall. And after that, Mirtha never stopped working.

She has more than 30 films to her credit, as well as 11 plays, two radio shows, countless appearances in telenovelas, series and TV specials. However, for most people, Mirtha is the queen of lunchtime. With some sporadic breaks and a subsequent foray into dinners, Mirtha Legrand has accompanying Argentines at lunch since 1968 with her talk show. Artists, politicians, athletes, journalists, international figures, doctors, writers and even some presidents have all visited her famous table.

And this is where the whole thing starts to get weirdy. Mirtha is an older lady, and with the impunity that being an older lady affords her, she has questioned even the unquestionable. I don’t think it has anything to do with whether or not she is right-wing. I think it’s more a question of knowing that she can say or ask anything she wants, and that beyond a certain stir, nothing is going to happen. No one would dare cancel Mirtha Legrand.

She has asked battered women why they think they were beaten. She has pressured celebrities to reveal their pregnancies on her show. She’s talked about abuse and other traumatic experiences on the air. She also has a tendency for homophobic statements; she even dared to suggest that a homosexual couple might have a greater chance of molesting their adopted child. Not to mention the position she has taken against feminism and the causes it defends. The lady is against abortion, the sexual education curriculum, inclusive language … it appears that if there’s something that could facilitate a change for the better, the Chiqui is going to oppose it.

So … how is Mirtha still Mirtha? Why is she still on TV? Why do we keep watching her? Because every so often Mirtha reminds us that underneath all that conservatism there is, to everyone’s surprise, a person. The moments when Mirtha becomes Rosa María again are the moments when we forget temporarily that she is a horrible person.

Mirtha cussing up a storm, Mirtha losing it because of someone’s extremely off color remark, Mirtha lipsyncing along with Pimpinella.

And anyway, how many older people do you know who are really progressives? Even my mother, who is twenty years younger than Mirtha, sometimes forgets her past as an idealistic young woman and throws out an ugly remark. What can we ask of a ninety-something-year-old lady? Maybe for her to retire? That will never happen.

I believe that if this year spent in isolation did not kill Mirtha, nothing will. Mirtha will continue with her lunches forever. In great shape, with her memory intact, standing up every time she mentions Villa Cañas, caressing her face with a rose and repeating this mantra that must be the secret of her eternal life.

I think Susana is more relatable because, as her theme song says, she’s just a woman. I mean, not a total diva, not a femme fatale. She’s just Susana, “siempre igual”. Susana provides us a feeling of… freshness? Clumsiness? Awkwardness? Like that feeling of being in the right place at the right time.

I don’t mean to detract from her accomplishments, but I think Susana has been very lucky. She hasn’t always made the best decisions and she still came out on top. And she’s been through a lot: Scam accusations. Stormy romances. An expensive divorce, which also involved throwing objects. And she was also able to find her way out of the hole she dug for herself with each and every one of her unfortunate remarks over the years.

Susana has something. I don’t really know what it is. But people love her, they support her through everything. Without being a great actress, nor a great singer, Susana made 34 films, 14 plays (two of them musicals), recorded two albums and also hosted Hola Susana, the other huge television talk show aside from Mirtha’s lunches. That show that had it all: games with fabulous prizes, interviews, international celebrities (even RuPaul stopped by), human oddities (from the shortest man in the world to the girl who cried crystals), musicals, celebrity-packed comedy skits. What a show!

And above all things, her pearls of wisdom, “las perlitas”. A compilation of all of Su’s gaffes. Because if there is something that Susana has done is laugh at herself. So she gave us gems like “a live dinosaur?!” or that time a small salamander bit her and she reacted by tossing it to the air, making the little boy who owned it cry.

That’s the thing about Susana: she’s endearing. She’s clumsy. She misspeaks often. She’s aoften bitchy. And obviously, every so often, she fucks up majorly. I want to believe that this is due to not minding her words too much rather than pure evil. Su has said terrible things, such as “she who kills must die” in reference to abortion, and then trying to fix it by adding “in jail.” Or when he said “if there’s too much poverty, let people go to the countryside.”

Maybe we should just stop asking Susana certain things. After all, she is a TV host, not a politician. She was not trained for political commentary. And here I think is the key difference with Mirtha: Susana messes up when people interview her. She seldom says anything on purpose to trip up her guest. And she’s also way into animals, how could we not love her? She probably loves animals more than she loves people. She made this very clear when she said “my life’s dream is to buy land in Africa and go cure chimpanzees.” Who am I to judge you, Su?

For no real reason I’m going to close this segment with my favorite Susana musical number.

And finally we have Ana María Casanova Faga, Moria. The One. The one who’s always “back”. Because, even though we’ve touched on scandals before, I don’t even know where to begin with Moria. Everything with her is always bigger, more exaggerated, more excessive. Her, her body, her style, her life. It’s all…  a lot.

Her career was initially built on the basis of her great body. From her 1970 debut to the present, Moria acted as a vedette over 40 times, almost 20 picaresque films (many of them with Susana), she was paired with some of the greatest comedians of the country before herself occupying the main spot. On TV she did comedy, drama, and served as the best talk show host in recent memory. Speaking of memory, that’s the name of her book: meMORIA.

The fact is, beyond that exuberant body and her desire to show it off, Moria is also very intelligent and quick-witted. She is the answer to the question that we have not yet asked. The solution to a problem that we didn’t even know we had. In addition to her artistic side, she is a businesswoman, producer, and even entered the world of politics when she ran in 2005 as a national deputy for a right-wing party. Luckily she didn’t win.

What’s hard for me to digest about Moria is that dichotomy. She’s extremely intelligent, expressing some very high-munded thoughts, and then suddenly… she goes back to being the daughter of the army officer and says some unfortunate things. Or she runs for political office with a hideous political party. Or speak ill of feminism. Anyway. Moria is smart, but she is still an older lady who sometimes forgets that not everyone had the advantages that she has. And that the way she lives her life is not what we all have and / or want for ourselves.

However, I can only take my hat off to Moria. I think that things get tough, Moria knows how to handle herself. When she was accused of stealing sapphires in Paraguay, Moria appeared in front of the Paraguayan justice… forgetting about the little bag of cocaine she carried in her purse. The jewelry thing plus the drug thing caused her to be arrested. But she’s forever Moria; she speaks wonders of the time she spent deprived of her freedom, and of her cellmates. To the point that after being released, she tried to return to spend the holidays with them. Extremely Moria.

In the middle of quarantine, when the Dr. Mühlberger malpractice and medical scam scandal broke, we were all waiting to see what the orthomolecular diva would say. Because it was on her show where the doctor had announced that he had THE CURE for COVID. But Moria, in her infinite wisdom, said “in life you can do everything except not pay the consequences. Now, I don’t know if his clinic is in good condition. That will be known to the doctor and whoever judges it.” And just like that, she removed herself from the narrative.

Because if there’s one thing Moria is good at, it’s verbal altercations. They don’t call her the “Lengua Karateca” for nothing. She’s had some of the most memorable outbursts in Argentine pop culture history. She is a professional bully and she can make and destroy you, in the media, with a single sentence. Because you may say “it’s my party, and I’ll cry if I want to,” but I’ll stick with “if you want to cry, cry.”