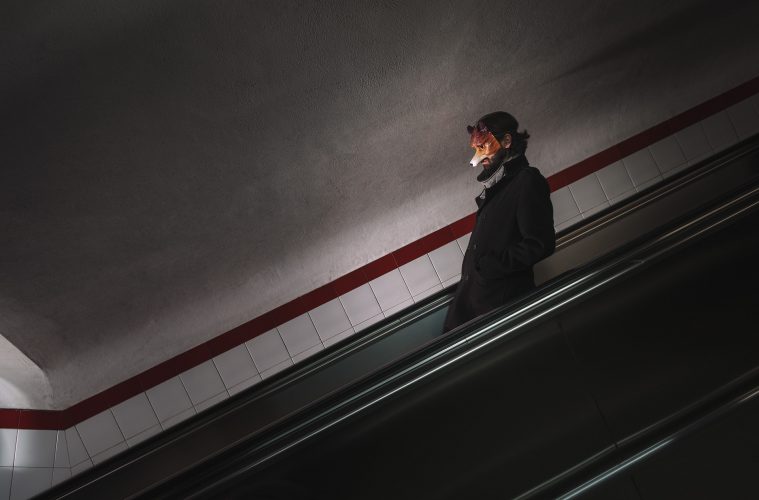 Everyone has a wild side. We can all be wild. We all dance the dance of emotions that rise and fall. Our wild side knows how to defeat our civilized side and that is what makes us humans.

Martín Ameconi, from Marcos Paz, is the head behind El Baile de los Salvajes, a project that originated in 2019 with the release of its first 10 song record. This record puts forth songs that take great lyrical, harmonic, and melodic care. There are moments in the album that relax you and others that make you want to jump over a sea of people.

In addition to his vast musical career, Martín also has an aptitude for drawing, as shown through his project Animaciones Salvajes, through which he shares his deepest (and, why not, wettest) artistic dreams.

In this interview, we talked about his career as a musician, his record, and what he’s currently up to with the most surreal and introspective animations on the internet.

First of all, I would like you to tell me a bit about the creation of El Baile de los Salvajes. Before this project, you were working under your own name and you have released several records. What moved you to make this change?

At first, it was just for fun, but also because I had been thinking about the identity topic for a while. Personality is a prison to some extent and, as Fabián Casas says, “the writer must walk away from the poem and let the poem tell them where to go.” That’s what happened to me with this album, I felt that I needed to take a step aside and let the music tell me where to go.

What can you say is the main difference between El Baile de los Salvajes and Martin Ameconi y los Pulpos?

Honestly, nothing. The process is the same: I write the songs, I make the demos, and I take the production idea to the band. Then the bandmembers make suggestions and bring forth ideas they find interesting. What I truly believe is that, maybe, El Baile de los Salvajes covers more than the idea of a band; it is a ceiling under which all my artistic whims can live.

What is the meaning behind the mask and where did you get it?

When I was recording the album, I watched the Scorsese’s documentary about Bob Dylan, the one about the Rolling Thunder Revue. In it Bob talks about masks; he says that someone who is wearing a mask will always tell the truth and I loved that idea. After that, I thought of a fox mask. There was something oriental that I liked in that figure, so I started visiting shops in Once [the neighborhood] and bought some cheap masks. I was about to dump them when, at a gathering, I told this to a friend, Camila Diez. She asked me if she could work with them, and that’s how I got these amazing masks. I have three of them and each one is a little different.

Last year, you played the full album in the Teatro Sony. How was the experience of playing the whole record live? Was it what you expected?

2019 was all about El Baile de los Salvajes. I do not tend to take myself so seriously, but for me this was not just about making an album and then presenting it live; it felt like a part of everything. I put a lot of energy into it, I devoted all of my time, I lost money, I sold instruments, and my girlfriend even dumped me. But I felt like it was what I had to do and, with all that weight on my shoulders, feeling fulfilled at the end of the show was a lot. It sounded incredible and we formed a team of beautiful people to whom I will always be grateful.

The record brings us back to a classic way of making songs, something that is a little neglected nowadays, was this a conscious decision?

The thing is that I always tend to make these kinds of songs. They are what I like to listen to and therefore what I like doing. It is true that the algorithms don’t tend to be very good with these kinds of songs today, but there are a lot of beautiful works out there. The issue is that those works are hidden more and more and it is difficult to find them because we are all talking at the same time in the same place.

What artists inspired you when writing the songs for the record? Did you filter your own personal preferences when working on this project?

Whenever I am making a new record, I can only listen to music that is aesthetically related to what I want to do, because, otherwise, I will end up crazy. I´ve been inspired a lot by Father John Misty and David Bowie. Obviously, The Beatles, but I wouldn’t highlight them because they are part of everything that I do, not just this record. Once in the recording studio, I start making things that are not related to my influences and that’s when everything gets funnier; it’s like pointing at one place and missing on purpose.

In your new project, Animaciones Salvajes, you pay tribute to different artists in animated videos. Could you tell us more about this?

Drawing is something that I did when I was a little kid. I don’t remember a time where I wasn’t drawing. That was what I thought I would do my whole life. It was the only thing that I was good at. Then the music appeared and I stopped drawing. That’s a problem I have: I am interested in something and I leave everything else, I scratch it out directly from my life. I’ve been making music since I was 15 years old. Today I am almost 35, and I can assure you that in 20 years I must have sat to draw 10 times, and maybe that’s an exaggeration. It’s weird for someone who was thinking about making a career out of drawing.

Is there a reason why these artists tell you their digressions?

During the lockdown, I was working on a new record. I had about 20 finished demos, but due to problems with the logistics of the recording and personal situations, the album started fading away. I got really upset because it mixed with a certain exhaustion and doubt about my future with music. When you feel stuck with an instrument, you look for a teacher or someone to help you with some classes to get back on track. But when the problem is more abstract, there are no teachers. I started thinking that I needed to talk to someone, that I would love to ask Fito [Paez] a few questions, or that I would love to know what Dylan would have to say to me. They would probably tell me not to bother them, but then I realized that they had already answered many of these questions. This all happened on a day that I was thinking of drawing again as if I had taken the pencil that I left when I was 15 out of a drawer and the first thing that came to my mind was drawing them. Each drawing is like a life jacket for me. I feel calm when I draw myself with Dylan or cooking with Fito or having a drink with Joni Mitchell. Without meaning to, I’m making a first-aid kit for bad times.

Musicians like Manuel Moretti and Jorge Drexler shared some of your animations. Did you ever imagine your drawings would have that kind of impact? Who else would you want to reach?

I think it’s very funny that, as a musician, I’ve always tried to reach my heroes through music, but that it wasn’t until I started drawing that I finally got to reach them. A few days ago, Fito wrote to me and I still cannot believe it. I also think there is a chance that Jeff Tweedy from Wilco saw my animation because I got a like from his wife. It is truly surreal.

Are the animations the prelude for something new from El Baile de los Salvajes?

At first, I thought so, but then I realized that they are not the prelude, they are the new stuff of El Baile de los Salvajes.

What question would you have liked me to ask that I didn’t?

The questions were amazing, but if you’d have asked me which goal from Boca I cheered for the most, I would have answered the one from Walter Samuel against the América of Mexico in the semifinals for the Libertadores Cup in the year 2000.

Follow El Baile de los Salvajes on any of his platforms below.