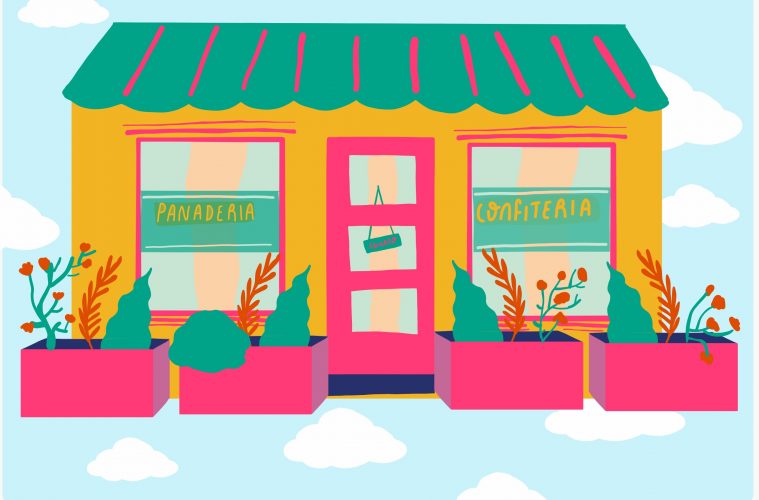 Please Feed Kevin | A Tribute to the Neighborhood Panaderia

My arm felt like gum laid to rest on the underside of an elementary school desk, lumpy and slowly hardening into the seat of a van with a broken air conditioner that drove me from Ezeiza to my host family’s apartment in Las Cañitas. I had read in my Lonely Planet that January in Buenos Aires was hot but it didn’t say anything about the air vibrating.

Or maybe it was my transatlantic flight cocktail of choice, Xanax and Tecate, exorcising themselves from my body.

I was meant to arrive in Buenos Aires two days before but snowstorms across the East Coast left me stuck in Chicago and delayed in Dallas. For two days, I had lined my stomach with a culinary kamikaze of cheap hotel cheeseburgers, whiskey seven and sevens, hot cheetos, three bags of my mom’s oatmeal chocolate chip cookies and whatever American Airlines defines as beef bourguignon. I was hungry.

My host parents’ apartment occupied the entire sixth floor. The air was heavy but cool and felt like it belonged to another hemisphere. We sat around a small informal dining table where I tried to exchange words as the survivors of a banquet purchased for my arrival 48 hours prior were placed in front of me. The pickings were slim, which was fine, except they insisted that I be the exclusive benefactor of nearly a dozen leftover sandwiches and pastries and a bowl of cheese puffs.

With the remains of a McDonald’s grade ham and cheese tostado mixto and café con leche still swimming in my stomach, this wasn’t my first choice for lunch. But my new family stared so eagerly as I took each bite that I couldn’t do anything else but glaze my eyes, crack a smile and push it all down with generous glasses of orange-flavored Tang.

I ate everything they put in front of me. The sandwich de miga squeezed under my fingers and made a cracking noise like ice pulled from the freezer impatiently. The ham, tomato and white bread had mutated into a single squishy entity that slid slowly down my throat. Two days on the kitchen counter had the opposite effect for the tortitas negras — the sugar dyed black crunched like coffee grounds and stuck against the side of my mouth. I followed my host father’s instructions and dipped the palitos de grasa in coffee that burnt my tongue and tried mate for the first time with ripped apart pieces of a loaf of bread shaped like a sun.

It was there at that small kitchen table, where we all ate two day old bread for the sake of politeness, my politeness to eat their offering, their politeness to not have already eaten it before my arrival, that my miseducation about the city’s pastry obsession began. For the decade that followed, my relationship to the neighborhood panaderia remained largely unchanged. White bread everything always seemed ready to accost me during moments of otherwise joyous celebrations. I continued to eat out of politeness and an empty stomach, worried that if I didn’t I’d be the snobby imperialist yanqui. I rarely felt as blatantly foreign as I did in front of a birthday party buffet. I could deal with the discomfort of not knowing who Xuxa was or dancing bachata really badly but couldn’t get past my discomfort about being someone so powerfully connected to food that was disconnected from those tables of food that everyone else moved towards like little magnets.

In late March when we were all forced inside and confined to consume within a ten block radius, I went through all the stages of grief, my obsessive mapping of the city’s food a suddenly forbidden task. I began digging into what was around me. I became a regular at the almacen de Jorge where I stock up on fernet and fiambres and La Castellana pasta shop where we occasionally treat ourselves to raviolis or long noodles with pesto. A block further the tiny pizza shop, San Antonio, turned out to have comforting empanadas overstuffed with juicy chicken, creamy humita and carne picante that actually slaps the tongue with spice. And I ventured into my neighborhood bakery, La Nueva Iris, which has a line out the door no matter the time of the day.

If I get there at just the right time between 9 and 10am, I can get a quarter kilo of chewy chipá fresh from the oven. Or a few hours later, a milanesa sandwich that weighs two kilos and tastes like oregano and butter. I always have my eye out for florentinos, a candied almond and dried orange cookie dipped in chocolate, that snap loudly and pair perfectly with a black coffee, and will choose soft, sugary palmeras over traditional facturas.

As I visited Iris’ display case more and more, I began to realize that the neighborhood panaderia had always been my unsung dance partner in Buenos Aires, my invisible cure for homesickness and nostalgia. When my brother-in-law passed away, I ate medialunas covered in dulce de leche and crema pastelera in the dark for days. When I lived in Abasto in my early twenties and routinely arrived home on the weekends at 6am, the bakery downstairs always sold me churros straight from the fryer even though they opened at 7:30. When the blackout hit the Southern Cone last summer, we ate torta frita and sfogliatella on the balcony with books and a hot kettle for mate and when our apartment flooded not long after we dried the floors in between bites of bombas and cañoncitos.

As a food writer, perhaps I am always looking for the best or the perfect version of whatever dish I’m seeking out. Under that vision of food, the neighborhood bakery is set up to fail. There is no such thing as the best sandwich de miga or pastelito, the best one is the one from the neighborhood bakery your grandma bought from or the one around the corner from the house you grew up in. Or for a foreigner, the first one that made you feel like you belonged there, even if you don’t know half the names of the facturas. The bakery where you know what is great and what you should steer clear from, because in a place where hundreds of different types of breads and pastries are made every day, it’s impossible for them to all be great, and that’s okay because being in on the secret is half of the charm.