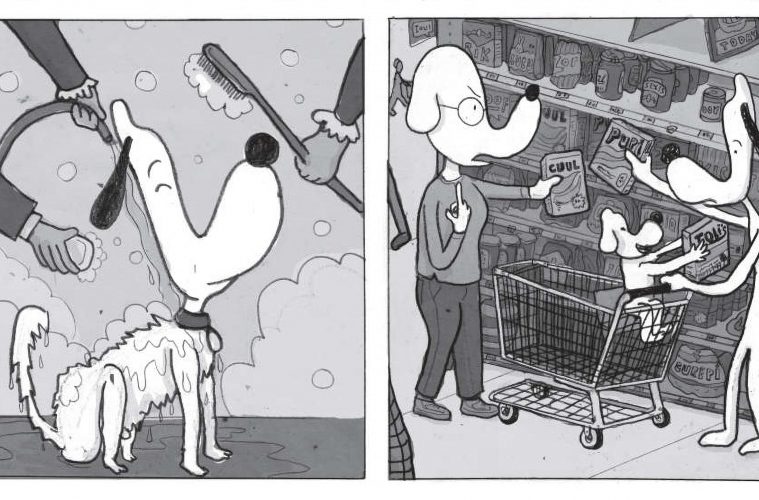 Greetings and welcome to La La Lista’s monthly exploration of independent Argentine comics. In this November of the strangest year in our lifetimes, we not only have the first week in seven months without mandatory isolation orders (good or bad news? I leave that up to you) but we also have the pleasure of continuing to read new works in the comic book publishing circuit which, against all pandemic expectations, continued to put out fantastic work.

This month we immerse ourselves in the pages of the two new pieces by the Tren en Movimiento publishing house, a comics label with a catalog that encompasses essays on the history of the fanzine format and local genre-focused publications, as well as a collection of graphic novels rooted in the experimental and risky. And when we say experimental and risky, we mean both in the content itself and in the publishing criteria: check out, for example, the delirious dimensions of Diario de un Loco (Cristian Montenegro, Nikolai Gógol).

With an episodic and almost entirely wordless approach, Mascota follows the life of Jaime: his work as an artist, his experience as a first-time father of a puppy, how he accepts a salaried job as the pet of a wealthy family in order to support his partner and child. And at the core of the story, how a tragedy turns his whole life upside down and leaves him to deal with the aftermath.

Although Jaime looks like a common dog in appearance, he is an animal that is more human than cartoon, exhibiting a wide range of emotions and experiences: through these screenshots of Jaime’s life we can accompany him in his daily battles, his happiest days, his darkest moments, and his passage through jobs that are as strange as they are familiar in their oppression and suppression of his individuality. Jaime is a character who ends up trying to reconcile a lost past in the midst of a wandering present, and in the pages of Mascota, Grassi manages to combine heartbreaking moments with bursts of happiness and warmth.

It is difficult not to draw a parallel with the funny animals that star in Jason’s comics*, since — like the Norwegian author — Grassi employs seemingly funny or childish animals to explore universal themes, employing a narrative without dialogue. But the author of Mascota takes this further, creating a rich and nuanced version with the visual style of a children’s story, with soft and friendly lines as well as a rough darkness that accompanies the events of Jaime’s life.

Another aspect that nourishes the story is Grassi’s willingness to explore darker tones, both in the themes as well as from a visual perspective: the black tonality which the work is constructed on sometimes gets to the point where a dark veil almost completely covers all the details of the drawing, causing you to work harder to see things that perhaps shouldn’t be seen.

Mascota is a graphic novel that left a deep impression on me as a reader, as well as a deep admiration for Grassi’s ability to narrate a life story which sometimes feels like watching a Pixar and a Clint Eastwood film at the same time. It’s among the best local comics I have read this year, as happened to me at the end of last year with Cartográfica.

A few years ago, I had the opportunity to interview Juan Saenz Valiente at his home. As we reviewed his work and publications, he noted that it was important to him that his work is published. “There are people who say they don’t care if what they do is released or not. (…) For me, it’s the opposite. Not only with my comics. I despair when there are authors that I enjoy and I don’t have [a published version of their work]”.

Conjuntivitis serves as a collection / compilation of what was produced by this prolific illustrator in fanzine format between 2008 and 2020, published by a publishing house renowned for its constant interest in the fanzine format within the history of national underground culture. It also serves to fulfill the author’s desire to have his work published physically and also calm the despair of completists. But whoever sees this compilation as a mere appendix to the books produced by Saenz Valiente or a publication that cannot be enjoyed by itself, could not be more wrong: it would be a disservice to a great work that serves as a window to the creative imagination and humor of such a versatile artist in his most playful and personal production format.

In the eleven fanzines over the 12 years that this book compiles, Conjuntivitis takes us on a journey through Juan Saenz Valiente’s “B-side” as an illustrator, accessing his most personal sense of humor and obsessions. They appear throughout the tour: costumbrist portraits that reveal the grotesquely human, an authorial attraction to old or ugly faces, a mockery of the establishment and the world of fame, a folkloric study of Argentine cuss words, a deconstruction of couples comic strip humor, and even the author himself as an object of self-study.

As much as the themes and styles vary between each fanzine, what prevails is an authorial voice that’s completely free to explore their interests with the sole desire to express their view. Saenz Valiente is an author who catches your eye but, after assimilating the creative genius and plasticity of his visual work, you appreciate his texts as much as his drawings. There is an added value when you detect the personal mechanisms that govern his work and his style. Conjuntivitis is a perfect catalyst to see what has changed and what remains exactly the same throughout over a decade of an author’s most personal work.

*It is worth mentioning that, as a result of the great Norwegian illustrator’s visit to Argentina for the 2015 Comicópolis event, publishing house 2D put out a compilation of his work called Un Paso en Falso, compiling two of his stories without dialogue. This is my way of sneakily recommending one of my favorite foreign authors / master of deadpan humor, as we were lucky to have a nationally released version of his work at a very reasonable price compared to the cost of his Spanish editions. You’ll likely be able to find it at the Punc bookstore. You will thank me