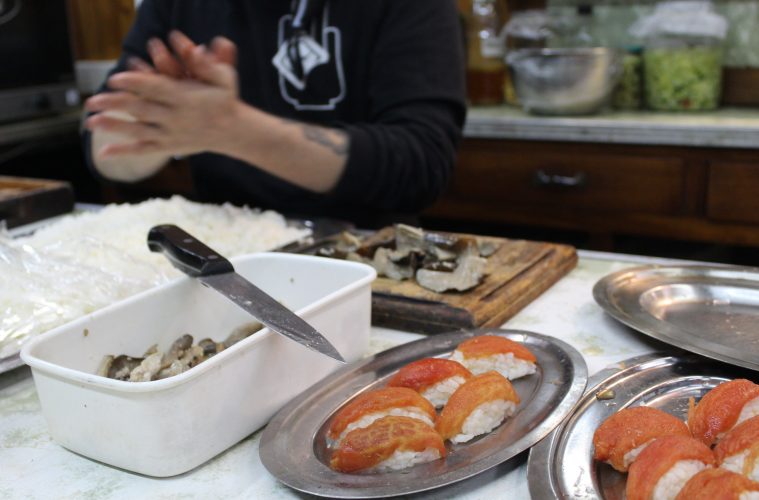 Please Feed Kevin | Vegan Sushi is Having a Moment

“Meet me outside the Imperio tomorrow at 4pm.”

These were the only instructions I received from my vegan sushi dealer. That type of food descriptor — ¿a vegan sushi hookup in Buenos Aires, huh? — was never something I imagined possible but this wild goose chase for food is becoming more and more familiar. As Buenos Aires creeps further into the pandemic era, the number of professional and amateur cooks launching DIY food businesses continues to swell. Erik Mejia, who sells plant-based sushi under the name Erik Kiuman, just happens to be one of the less conventional ones.

Back in November, Mejia started making sushi out of his small San Martín apartment. The quarantine has helped boost sales and capture the attention of other aspiring vegan sushi masters. When I went to pick up my order on a sunny Saturday afternoon, he had orders for half a dozen others ready to shell out.

Sushi isn’t his first experience selling vegan food independently. He started selling homemade seitan in his late teens and designed a menu of vegan hot dogs and burgers for a bar down the street from his apartment. At Donnet, where he currently works, he runs the restaurant’s sushi counter. Making his own brand of sushi, he tells me, has been a step towards cooking something more sincere and finding his culinary rhythm.

Originally from rural Monte Grande, Mejia grew up eating a mix of Paraguayan, Argentine and Peruvian dishes. His mother inserted a love for rice from an early age. “There was always a pot of rice on the stove,” Mejia recounts. His fanaticism for Japanese culture came later. “There is a dedication and respect for Japanese food that fascinates me. I’m definitely fanatical but the Japanese know everything. I think that they are far more advanced than us in so many ways and food is certainly part of that. And there are plenty of vegan recipes and vegan cooking styles that most people [in Argentina] aren’t aware of.”

On Fridays and Saturdays, Mejia makes boxes to order with a mix of rolls, gyoza, uramaki, maki, onigiri and niguiri. There is no set menu; rather he opts for an omakase-style approach based on whatever he has felt like experimenting with that week, supplemented by a steady supply of mushrooms from Galpón Saludable, edible flowers and in-season vegetables.

“In this kitchen, I cook what I want to cook. Everyday a new idea pops into my head and this is the space, with this sushi, that I am able to make those ideas materialize,” Mejia explains. “I like this style of cooking. I think we need to start moving back towards that. I have one pot and one pan, the stuff I ferment and whatever I played around with that week sitting in the fridge. There is a lot of love put into this food.”

Turmeric, soy sauce and notes of citrus are the threads that unify everything together. I tried chunky oyster mushrooms flash fried and stained yellow with his favorite spice, soft carrots sautéed with fermented cashew cream, crunchy turnips and radishes with soft edible flowers. Maki rolls with sautéed mushrooms were blasted with sharp bites of cucumber and green onion, glazed carrots were stuffed in colossal gyozas and quickly seared, and onigiri were exploding with cashew cream and mushrooms with the texture of cooked tuna — although imitating fish isn’t the point.

From his little kitchen in San Martín, Mejía pre-dated what will likely become the next “tendencia” in Buenos Aires. A handful of options have already begun to pop-up from interpretations of traditional Japanese to the porteño preference for Peruvian-style nikkei. A rudimentary search on Instagram reveals a handful of others like Vegan Sushi in Almagro or Suttoshi in Nuñez, DIY-style Misato or Sushi Vegan Appetite in secret kitchens and half a dozen others. The pandemic has both shrunk the dining scene, and given birth to an already blooming vegan food scene with sushi easily its most florid vine.

Let It V is a Palermo Hollywood spot that was meant to launch prior to quarantine as a tiny omakase-style bar. The pandemic has pushed the restaurant in another direction with an expansive menu available for take-away as well as sidewalk service with a limited selection. The menu veers into nikkei territory with loud Peruvian options and a handful of Mexican-inspired dishes as well, like nachos and burritos made with fermented tortillas. Although the large scale take away service has some growing pains to get over — the rice wasn’t sticky enough and broke under the weight of its fillings — the rolls were fun enough to get me to order a second time. Be sure to order the Yellow Submarine, niguiri with cured under ripened mango and jalapeño, or a Pineapple Express, a roll with smoked bell pepper and grilled pineapple.

In Chacarita, Donnet launched their own sushi counter under the self-explanatory moniker Sushi Vegan Chaca at the start of the lockdown when, according to head chef and owner Manuela Donnet, the restaurant couldn’t “make our regular menu work in delivery mode.” Sushi was an idea she had flirted with in order to open the restaurant for lunch service and the quarantine pushed it off the ground.

“We realized quickly that the regular menu wasn’t going to work with delivery. Not for the food and not the experience we want to give. I made sushi in the dark ages of my kitchen experience and some of the other chicos had experience with sushi as well so we bought a bag of rice, nori and soy sauce and got started.”

Although Donnet relaxedly described the restaurant’s move towards sushi, the small menu of makis, uramakis and nigiris is hardly nonchalant. Surprisingly, mushrooms aren’t the central focus: portobellos and oyster mushrooms make up just a quarter of the menu. I liked the latter which are macerated with coconut milk and leaves a sticky, fresh flavor on the tongue. A classic ‘porteño’ roll stuffed with avocado and cashew cream cheese is simple and satisfying, and thin slices of tomato marinated in sweet rice vinegar and soy sauce takes on a convincing tuna texture. Don’t pass on the soy sauce braised carrots with lacto fermented beets and mustard-ish flavored microgreens.

Vegan sushi is likely here to stay and continue to thrive. But even if it takes off with copycat models like with the first explosion of sushi across the city, at least this time we’ll be spared the cream cheese.