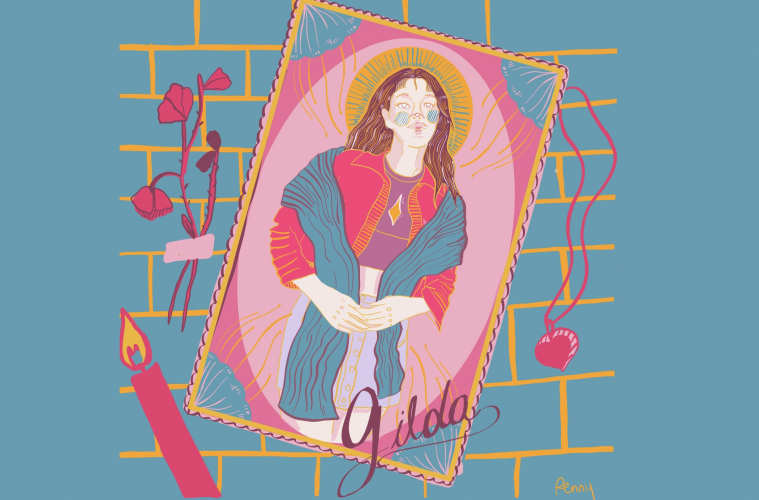 When I was a teenager, I stumbled upon a Christian song about mustard seeds and faith. The song was one of those annoying earworms you can’t get out of your head. I even dedicated a Fotolog entry to it. Yes, friends, this mustard-seed faith thing was so significant to me that I wasted my one daily Fotolog post to write about it.

The song was about having faith like mustard seed (which I didn’t know seeds were capable of), and its lyrics maintained that, with the power of faith by your side, you could accomplish anything: if you told the mountains to move, the mountains would move. If you told the sick to get well, they would get well.

I am not a woman of faith. I’m pretty sure that simply telling sick people to get well is not the best path towards a full bill of health. But this quarantine may have led to connecting with my more spiritual side. I found  “Como La Flor” by Selena, which I’ve adopted as a sort of mantra that helps me find peace when I feel overwhelmed. I think that music — and perhaps cumbia specifically — has a certain power. I don’t know if it’s God, magic, the sheer willpower of a large group of people… I don’t know. But I especially believe in Gilda.

Gilda was a cumbia singer. In fact, she was the cumbia singer. The standard bearer of the bailanta. She was, perhaps, the first woman who really broke the glass ceiling in the tropical dance music scene, an environment where there simply weren’t a lot of women. The few that were there were seen more as an accessory.

Gilda’s greatest accomplishment was to dare. To take that step. She already had what was considered at the time to be a “full” life — a husband and children —  but she wanted more. She wanted to accomplish what she dreamed of, even if it meant turning her world upside down. The most heartbreaking aspect of her entire story is the little time she had to enjoy all that she had achieved. That is why I think after her death she became Santa Gilda.

But let’s start from the beginning.

“Gilda” didn’t exist as such as until 1990. Before then, we only had Miriam. A kindergarten teacher, wife, and mother of two. But Miriam had always wanted to be “Shyll,” the name by which she was called in her closest circle, and dedicate herself to singing.

She loved music, but she kept postponing her dream to actually make it. Several sources, including her biopic, say that she responded to an ad in the paper and went to a casting call put out by Toti Gimenez. Others say that it was a chance meeting with Toti, “a childhood friend”, and that a conversation with him was what convinced her to dedicate herself to singing. Others say that Toti saw her imitate Gladis “la Bomba Tucumana” at a show at the kindergarten where she worked.

There are many stories. But it doesn’t really matter how Toti appeared in Gilda’s life. The important thing is that they connected, and this connection served as the catalyst for Miriam’s irrepressible desire to finally become the singer she always dreamed of being.

So around 1990, Miriam went from being Shyll to being Gilda. Her new stage name was partly a tribute to Rita Hayworth, but mostly she just didn’t want to have to explain the “Shyll” moniker. Gilda hung up her kindergarten teacher’s smock and put on her miniskirt and knee-high boots. With Toti and a new group of musicians by her side, she began hitting the nightclub circuit.

Things, of course, were not easy. It wasn’t a friendly environment for outsiders. And it must be taken into account that, in the eyes of the bailanta crowd, Gilda was still Miriam, a well-off girl from Devoto. But she believed in herself, and she had Toti, who believed in her more than anything else, by her side. And, to no one’s surprise, a love blossomed between the two of them.

It should be noted that at that point Miriam’s home life was already a mess. Her family did not enjoy this whole “cumbia singer” nonsense. Her husband was jealous and possessive, which led to a separation. Her kids missed her, and her mother was not much of a fan of the whole thing either. But Gilda kept on singing.

For me, this is one of the secrets of Gilda’s success: perseverance. Not only that, but the fact that she could actually sing. She wasn’t just a pretty face, or even a voluptuous body. She knew how to sing, and she did it really well. What’s more, she could write her own songs. Most of my favorite Gilda songs were written by herself.

It is no small thing that she sang her own songs. It may not sound like an impressive feat in the context of the “authorial pop” of 2020. But in the world of female cumbia singers, it was a big deal, especially back in the early nineties.

Gilda didn’t really reach mainstream status until after her passing. Yes, she did attain a certain degree of fame, but only in the world of tropical dance music. In her lifetime, the stigma around cumbia and other tropical rhythms (such as cuarteto) was very much alive; in this day and age, it’s a thing of the past, but at the time it was very easy to look down upon those genres. I myself, at 14 or 15 years old, considered myself an alternative rocker and would loudly decry how “cumbia is shit.” And here I am now, preaching the word of Gilda and the love for cumbia.

In a move reminiscent of Live at Folsom Prison, Gilda performed at the No.9 Penitentiary in La Plata. She didn’t just sing, she also danced on stage along with some of the inmates. I watched this scene in the movie and thought “this is obviously exaggerated or fabricated.” But upon doing some research, I found videos of the real event and thought it was even more incredible than the movie. She not only sang and danced with the inmates, she also stayed to eat and hang out with them.

The actual video of Gilda singing and dancing with the prisoners on stage is strangely moving. It seemed unimaginable to me that a woman would dare to sing at a men’s prison. In my mind, it’s always men who sing in prisons. It’s like I had that image of June Carter coming out to sing along with Johnny Cash at Folsom. But no, Gilda is not June. Gilda is our Johnny Cash.

Obviously Gilda was a much better person than I am. I would not dare to enter a jail, and if someone attributed miracles to me I would probably laugh in their face. This whole idea of Gilda being some sort of saint figure was not purely a posthumous phenomenon. During her lifetime, people believed that she could actually perform miracles. She told the story of a girl coming up to her at a show to thank her for saving her mother’s life and, incidentally, the girl’s grandmother asked her to cure her diabetes. Right there in the dance floor.

This mystical allure around Gilda only intensified after her death, in large part due to the tragic and horrific nature of it (the bus in which they were traveling to the next show collided head-on with a truck; Gilda, her eldest daughter, her mother, the driver, and some of the touring musicians died). But this is also because, over time, we got to find out more about Gilda. Her songs became even more popular. They were covered by other artists. They transcended cumbia, becoming standards and anthems. The miracles began to multiply and, with them, the faithful. The scene of the accident was transformed into a sanctuary, and her tomb in Chacarita became an attraction.

Gilda became bigger than Jesus, like the second album by The Be Sharps. I don’t think it’s possible to attend a party in Argentina without some of her hits being played at some point. Because you may not know much about Gilda, but I’m sure you’ve danced to her songs. Or maybe you thrashed and moshed to a rock cover of one of them. Or you went to a stadium and chanted a version of one of her songs dedicated to your team.

Not only that, but many years later a film about Gilda transcended borders and crossed oceans, becoming an internationally acclaimed movie. Natalia Oreiro (born in Uruguay, adopted into Argentina, and one of my favorite people) played her in the biopic, bringing the Gilda phenomenon to new levels. Now Natalia’s fans are also fans of Gilda.

As much of a skeptic as I am, I cannot deny that there is a certain magic around the mythical figure of Gilda. I wouldn’t dare call her “holy,” and I really don’t know if she actually performs miracles. But I do believe that her passage through earth was miraculous. I think her music has a certain something, and that it’s a positive force. I don’t know if it can literally cure the sick, but I do think that it has healing properties. Because happiness can be healing. And if you gave me the choice between a suffering saint and one that makes me want to dance, I will always choose the latter.