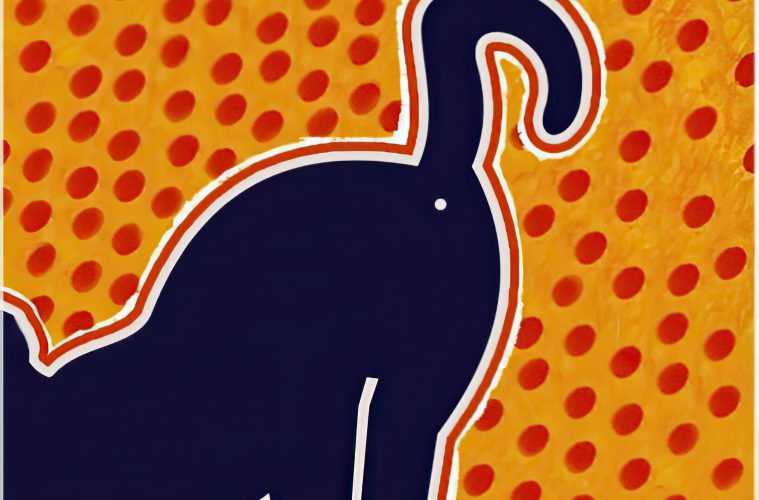 Sometime between 2006 and 2008 (the timeline gets blurrier and blurrier as it drags on) Miguel Barrenechea (Mike) started a series called #TapasDeGatis, in which he began using Photoshop to edit cats into the covers of local albums. He drew inspiration from a Tumblr account called The Kitten Covers, and started the project with some of Argentine music’s household names: Sumo, Gilda, Spinetta, Fito Páez, Babasónicos, and Manal.

The project saw an extended hiatus throughout the late aughts, but came back to life (the second of nine?) this year, better and more prolijo than ever (you can probably imagine what 15-odd years of leveling up in Photoshop skills could do for a cat on a cover) (but you don’t have to; because (almost) all the covers can be seen on Instagram).

The series now includes 100 catified covers, and counting. And the approach has grown more sophistiCATed with time; Mike seeks not just to “put a cat on it,” but rather, adapt and merge parallel concepts and design ideas from two different worlds: the world of gatis (a sort of diminutive/gender neutral form of gatos), and the world of Latin American (mostly Argentine) music.

In this second batch, he started out with the albums of his generational cohorts and close friends, namely Mí Nave, Lucy Patané, Nahuel Briones, Carolina Pacheco, Mariana Michi, Paula Maffia, Ignacia, and Mí Amigo Invencible (all names you will be familiar with if you read this magazine regularly).

Mike’s current goal for the project is to convert it into a book, as per a suggestion he received from the writer and photographer Nora Lezano. This process will involve some investigation into obtaining copyright permissions, and finding a willing publisher (wink wink, nudge nudge). And he plans to use the proceeds from book sales to help cats in need.

When he’s not busy making feline and human worlds collide on Photoshop, he’s using his powers of design in other ways; bringing people together through music, collaboration, dedication and active participation in community. You might have heard his band Placard, or heard the story of El Disco Robado. You might be familiar with his 2012 project También Dormimos. You might have seen him in the audience of a local independent music event — before the quarantine, he was going to, oh, about ten of them in a given week.  And at home, he is a loving companion to two furry friends, Fuzz and Ringo

I met with Mike via video chat to find out a little more about #TapasDeGatis. Here’s what he had to say:

How did you get the idea to make cat-themed album covers?

Three jobs ago — well, I don’t even remember anymore how many jobs it was — sometimes a job is a unit of time. I think it was four jobs ago. I didn’t have much to do and I had Photoshop open, so I started clicking around and clicking around, and learning about photo editing little by little.

At that same time, I was on Tumblr a lot, and I found a blog called The Kitten Covers, which is an excellent reference, I think it’s the philosopher’s stone of all this. I really liked the way she approached making each cover, and her editing skills are quite good. I’m not trying to compare the two projects, but, the level of detail in The Kitten Covers is incredible. It’s very clear that this is someone who knows their way around Photoshop. But I do think that a sort of parallel exists, I don’t remember her name but the person who made Kitten Covers is also a musician, she has her musical project and all that, so, it’s a nice parallel.

When I started doing the local versions I got in contact with her, and told her that I was going to do versions from here, from Argentina, because I wanted to make sure she wouldn’t have a problem with it. She said sure. So that “sure,” that “yeah!” “go!” I’ve had since 2006 [laugh], or maybe 2008, I think.

And what was the first cover you did?

I did a few that I never posted anywhere. The very first one, hmm, it’s between two, if my memory serves me. It was either Trance Zomba by Babasónicos, or Gilda. I think it was Gilda. Corazón Valiente, with the floral background. It took a lot of work, it was really difficult because I didn’t know the first thing about editing.

So, you had no experience with Photoshop when you started. What did you do?

It was like pulling teeth. If you go online, you can see that first one I did, and you can see how rough it is. What I used a lot in those days, because I didn’t know about cloning, or other tools, basically what I did was, well, I’m gonna get technical here, I would just cut, and erase, and recreate the layers using filters, overlapping filters, which didn’t necessarily get me the same result as the cover. Then, when I learned how to clone, that made everything so much easier. What I do think is a big difference with covers I did in ’06-’08, which are the first ones that appear in the series on Instagram, is that they were much more directly related to The Kitten Covers, just cats occupying the place of humans. And with time I started subverting that original concept, and trying to really…felinize the intention of the cover. That’s what it is.

Why do you think people love cats so much?

A few reasons, I think. One, because they used to be so hated, and from hate comes love.

Historically, cats were rejected in many societies, or seen as a symbol of the occult, or power, or something nefarious. And dogs, on the other hand, that stupid idea of cat and dog antagonism, were always seen as the good guys. And it’s still considered derogatory to say that someone is “medio gato” (kind of cat-like) and not that someone is “medio perro” (kind of dog-like).

We love cats because they are in our lives, no matter what happens. And it’s much more feasible in this day and age for a cat to come into your life, and we identify more with cats, probably, than dogs, because of how they are. I would like to be a cat. If I could choose, I would be a cat. And my second choice would be an octopus.

Interesting. Cats and octopuses have that in common, that they can fit through anything their head can get through. And that they sort of, fill the space of their container.

Yeah, they have that in common, yeah. If the head fits through, all the rest does too. And also, what you said about filling the container makes me think about water, and the thing that Bruce Lee says about water. “Be like water, my friend.” That’s always been something that speaks to me, in different areas of life. Especially with music, when I make music I think about “taking the shape of the container you’re in,” and that’s what the cats are doing when they appear on those album covers; they take the shape of the idea. It’s no longer just cats, now they are taking on the shape of the idea.

Yeah. One of my favorite of the covers is the one that makes the space into a litter box.

Ah, yeah, the Bandalos Chinos one? Yep, I made their world into a big litter box. The band thought it was cool, luckily. Because it could have been taken like… like, they’re so spoiled and can shit wherever they want.

How did you choose which albums to catify? Other than just that they be from Argentina.

Well, I also liked the idea of doing albums from all over Latin America. I did Cafe Tacuba, Javiera Mena, Alex Anwandter, um, who else… meh, I’ll remember later. There’s some folks from Uruguay I’d like to do, and more. But I’m not really sure right now. I only did covers for albums that either I like, or that I think are really good but haven’t necessarily listened to a ton. I didn’t make any covers of albums that I wouldn’t recommend. I didn’t do anything against my own will.

How would you describe your role in the local music scene? And do you consider this project an extension of that?

I don’t know if in equal parts, but, in addition to being a musician, I’m a consumer of music. And more than a consumer, I’m an enthusiast, wouldn’t you say? I’m not canuto.

Yeah. Like selfish and stingy. And, well, it’s like, if you have useful information and you keep it for yourself. That’s what it is. For example, if you have knowledge that could help other people, but you keep it for yourself. That’s being canuto, it’s not just like, not sharing weed or beer or whatever, but something that, it would be really good to share it but you don’t.

On the one hand, but also, I’m a musician, producer, and I’m always connecting people. No matter where I’m at, I’m building connections between whoever’s there. This is gonna sound weird, but, well, I’ve very rarely ever made a connection with someone out of convenience or something like that. It’s about where I’m at in a given moment and the people that surround me, and doing the best possible work with those people.

For example, I don’t know if you know, but, in 2011 I did a project called También Dormimos. And that’s what I did, I went to the people who were my friends at that time, people who I had some sort of either formal or informal relationship with, musically.

And yeah, doing projects with an understanding of where you are and who you’re with, and always keeping that in mind. It’s a way to create. Creating, always with your current surroundings, not forcing things, not thinking about where you want to be — that’s another story. I don’t create in order to get to somewhere else, but rather, to understand and reinforce where I am.

And that’s why the cat covers, it’s a more personal thing. And there’s an aspect of self evolution in it. For example, when we did También Dormimos in 2012, it was because I couldn’t sleep. I had health problems, money problems. And all of the people — all of the musicians and photographers who pitched in, that was really good for me. And for them; everyone contributing their little part. But this project, it’s all me. All done with these hands, these eyes. So, I took everything I know, and gave the best of me. There’s 100 covers now. There’s still a few I’ve left out, and ideas for covers I want to do, some drafts, some throw-aways, covers that I abandoned completely. And I’d like to make a book. I wrote to Nora Lezano a little while ago, and she said I ought to make a book out of all this.

And that’s the plan. Now it’s just a question of getting the rights. Because it’s one thing to publish my work as part of the creative commons, but it’s another to publish a book with that, the original and cat covers side by side, like when I post on Instagram… if it’s one of my albums then obviously there’s no problems, or those of my friends, obviously they’re going to say yes. But then, for example, in the case of Cerati or La Renga covers, I’d have to get in contact with, I don’t know, the people who have the rights, the artist, the label, I’m not sure.

I’ve got to look into that. But yeah, what I want to do is publish a book, and then have all the proceeds from the sales go towards something related to cats. Like, giving money to a shelter or, some organization that helps cats.