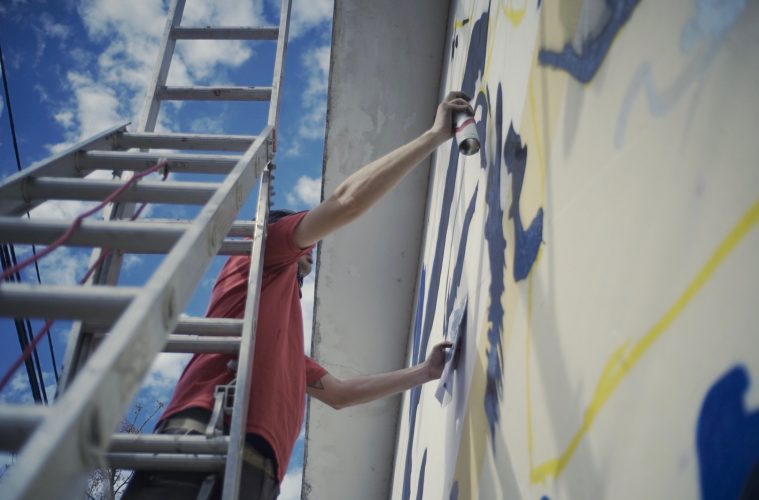 Buenos Aires Street Artists Return to Their Canvas and Community

A veteran, rookie, and newbie street artist meet on a street corner just outside of the city limits of Buenos Aires. The sleepy weekend streets of Martinez, a lush suburb, are filled with family homes, imported cars, and dogs behind fences that bark but don’t bite. After all, Martinez borders the ultra-privileged San Isidro – a neighborhood so well-manicured it echoes the Sims more than stereotypical imaginings of South America. Nonetheless, Martinez has more of an industrial charm, and with it, blank walls that beckon street artists, who after months of quarantine are itching to bring their ideas to the streets. Here we meet Gerdy Harapos, Tomas Menendez, and Cucho Dub – our veteran, rookie, and newbie, respectively – who have come together to paint and consider street art’s place in a pandemic.

Buenos Aires is no stranger to street art. In fact, some would say the region’s romance with color finds its beginnings with Benito Quinquela Martín. One of Argentina’s most beloved artists, Quinquela Martín left a colorful mark on his beloved neighborhood of La Boca. Thousands of tourists flock to its main drag, Caminito, to soak in the colorful buildings: conventillas and casas genovesas stitched together with corrugated metal and wood bathed in the leftover paints from ships that passed through the nearby port.

What can Quinquela’s legacy bring to 2020? Quinquela, though not a street artist, was unwaveringly dedicated to the beautification of his neighborhood – “La Boca is my workshop, my refuge, and my muse.” But Martinez is far from La Boca. Beyond the geographic distance, the socioeconomic landscape is markedly different. Perhaps it’s not the context that should bear such importance, but rather how art and color breathe new life into public spaces in times where we need it the most. Further, behind these colorful interventions is a bustling social network of artists who rely on two things that the pandemic has made nearly impossible: getting together and getting out into the streets to create. Nearly impossible — until now.

On a dilapidated blank wall along Diagonal Salta, Gerdy Harapos is mapping out a mural: a realistic portrait of an unknown man in electric blue with a shocking white mustache. This isn’t Gerdy’s first rodeo with large-scale art. He began creating street art twelve years ago, following a neighborhood gang of graffiti artists. “I’m no vandal, that’s not really my thing, but I would always go out with them because it’s better together. I would bring my stencils and posters and do my thing alongside them.” For those who are interested in creating large-scale work, the prospect is not only intimidating but can seem downright impossible – Where can I paint? Paste my posters? What if someone doesn’t like it? The neighbors? Gerdy, who has converted his passion for street art into his career, recounts that even he has these concerns after over a decade. But one condition seems to allay these anxieties: “If you’re alone the whole day, it’s a completely different experience. Creating so much better when you can share it.”

On this sunny weekend, our veteran is happy to be sharing his process with Tomas and Cucho – especially after Argentina’s almost 200-day-long quarantine. The three came together through a friend-of-a-friend connection, with Tomas pushing the group to get back to the streets and create. “I saw a rundown wall and rang the doorbell” says Tomas. With a simple “Yes, but nothing offensive,” the team was ready to create. For Tomas, a painter since age fifteen and muralist for the past three years, taking advantage of a blank wall felt like a necessary response to long months of social isolation: “I compulsively had to disperse all of this energy into creating. The pandemic on a social level lowered my level of inspiration, but on an artistic level I was creating a lot, constantly. The pandemic gave me the need the urgency to get out on the street in any way I could.”

Rather than urgent, Cucho describes his desire to create a mural as more of a latent curiosity, something he always wanted to do but wasn’t sure how to do it. In fact, crossing paths with his now-mentor Gerdy couldn’t have happened without quarantine: “A friend had told me about Gerdy, this guy who was into street art and lived close to my parents’ house. My parents are older, so during quarantine my siblings and I decided to keep our parents at home. If my mom needed anything, like milk, I’d go to the supermarket, buy it and bring it to her. One day I was over there, and I actually crossed paths with him. Coincidentally, Gerdy lives just behind my parents’ house – the same house that my childhood bedroom window used to face. I started going to my parents’ house more, to Gerdy’s – I confessed to him that I always wanted to create a mural, but I guess I hadn’t found a way. He helped me to get started.”

Street art is founded on the act of sharing: ideas, materials, and spaces. Beyond the artistic process, the final work is consumed publicly, placing it in a social context unlike museums or monoambientes. What we choose to adorn our walls with is deeply personal or perhaps even purely aesthetic and have a limited audience. Spectatorship and social life have moved to the streets, the plaza, the park. Spaces that were always shared are more essential than ever. Knowing that one’s audience could amount to the thousands might result in a bit of stage fright, at least from the non-artist’s view. Yet, Gerdy reveals that it’s quite the opposite: “Everything I make something has a message. The person viewing it is probably going to interpret whatever they want. That’s good, though… Color transmits so much energy, and it brings happiness even without too much analysis of the designs themselves – the color itself has power. I’m always thinking of the neighbors and for that reason I like working during the day so that they can see what I’m doing. If there’s a run-down wall, adding some color will always be for the best. That’s the vibe – I am always trying to find spaces to make more beautiful, just trying to give my little idea a home.”

Tomas sees the public space as a canvas upon which he can explore ideas and pose more existential questions, share his curiosities and doubts: “The character that appears constantly in my work is called ‘Tranquilo’ because he tries constantly to emit feelings of tranquility, and calm. He is a chubby little man who likes to pose philosophical questions: ‘What is peace? What is art? What is freedom?’” Tranquilo does emanate the feeling of peace, even in times of chaos where the dollar rises like a tidal wave, when masked faces dominate the streets and smiles between passers-by feel like a distant memory. Eyes closed, round and whole like a full moon, Tranquilo needs no mask for he exists in an interstitial space that we merely skate along the surface of – a heavenly body of sorts brought down to earth by aerosol and afternoon beers.

Even our newbie shows no signs of fear. But perhaps as it’s Cucho’s very first attempt at a large-scale mural, he shies away from the fearless sublimation of a more experienced artist – or so he thinks: “The stencil I used for the background is a Scoob – a speaker that was popularized in the 70s. Well, right now, my real speakers are stored away collecting dust and for the near future they’re going to stay that way. When Gerdy asked me what I wanted to do create for the mural, I said I wanted to do a portrait of the culture I’m most interested in, dub, which comes from the streets of Jamaica. Well, even though I can’t take my speakers out and play, at least they’ll be in the streets somewhere.”

Cucho’s collage of Jamaican hitmakers exudes desire, perhaps the desire to be elsewhere or to be here, but under different conditions. His heartfelt salute to dub artists who fought to be in the streets, against colonialization and harsh inequalities, allows us to travel to a tropical island, to expand our playlists, and consider the street as a sacred shared space ripe for creation and resistance. While Argentina’s borders remain closed, there is a direct flight with open seats — Martinez to Kingston – available to those out for a quick paseo del perro or on their way to the kiosco.

A street corner left more beautiful than before. Bonds forged in times of loneliness and isolation. Still, one might question if street artists should really be out when we face constant reminders to stay inside. “We’re not essential workers,” Cucho tells us. But when our worlds are a bit smaller, those who can help us enjoy the splendor of the limited radius we do have are, undoubtedly, indispensable actors in this global test of communal care.