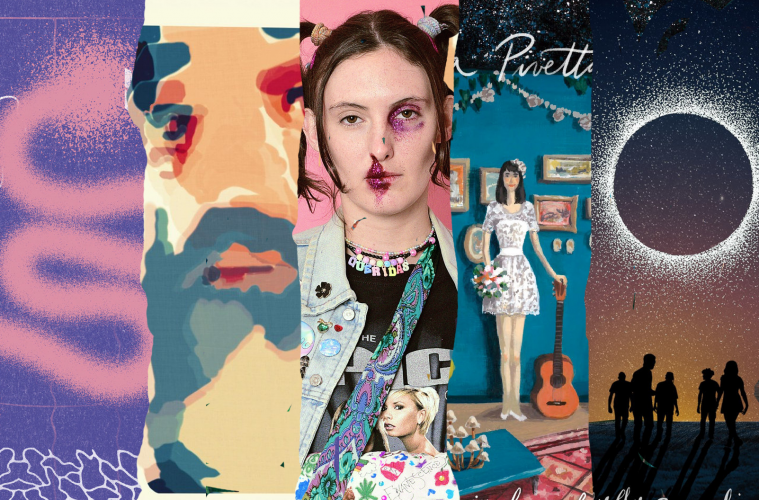 The Greatest Argentine Debut Albums of the 2010s, Part 2

Howdy. Welcome to another installment of our running series on debut albums from the local scene released between 2010 and 2019. You can read part one right here. How many parts will there be? There is no way of knowing. We have a wealth of excellent Argentine albums from that period to celebrate, so we’ll keep rattling them off as they continue to shove their way past the throng and towards the front rows of our brains, like an overzealous sweat-soaked audience member at La Trastienda. Hey, remember concerts?

Why did we pick that specific time period, especially given the fact that time is an illusion and such delineations are largely meaningless in the grand scheme of things? For the same reason we do any sort of ranking and listing here at La La Lista: to take our minds off of the creeping darkness at our backs. That’s kind of our thing!

Also, in hindsight, the 2010s were a much better decade than we gave it credit for. I’ll tell you one thing, they didn’t have a crippling worldwide pandemic that threw our lives into disarray. We’re ten months into the 2020s and, while there’s been a lot of great music released (you can read our thoughts on that here) we’re pretty much ready to go back to the way things used to be. Back into the comforting arms of 2010s cultural artifacts such as… uh… Vine… the Harlem Shake and… fidget spinners? What were the 2010s about, anyway?

While we ponder that, let’s move on to our list.

Fantasía Peligro is Medalla Milagrosa’s debut full-length album following a couple EP releases that showcased a steady line of artistic growth. Existing in the sonic space where post-punk and shoegaze meet, the album is a tour de force of reverb-soaked guitars, hazy vocals, stuttering drum lines and melodies that manage to sound simultaneously peppy and morosely melancholy. Unlike other bands of this genre, the vocals are not a distant, vaguely-discernible mush; they are front and center, meant to anchor the songs, guiding the listeners through murky emotional waters and half-remembered recollections. It also just sounds great.

Fantasía Peligro can be streamed on Spotify, Bandcamp, and Youtube.

The first word that comes to mind when I think of Cordoba’s Fly Fly Caroline, and specifically the music off of their excellent self-titled album, is “cinematic”. Not just because of the swells of strings and horns which appear throughout to punctuate and enhance the drama, but because their compositions themselves — the bones of the song, removed from any production accoutrements — are already grandiose and theatrical, with their own dramatic arcs running through. There’s a refreshingly unabashed intensity to the tunes, which go from hard-hitting power-chord driven rock to pop bangers to piano-based ballads and are chock-full of hooks and catchy melodies. A willingness to surrender completely to emotion without holding anything back for fear of overdoing it. “Overdoing it” is a myth, anyway. Check out our interview with the band here.

Fly Fly Caroline can be streamed on Spotify, Bandcamp, and Youtube.

Just like its striking album cover, the songs in Heridas are all about putting trauma and (emotional) injuries on full display. It is an album that, aesthetically, reminds us of the early-aughts vaporwave explosion; there is a sense of distance to the album’s sonics, with many of the songs sounding like you’re listening to them from one room over. Guitar lines cutting through thick beds of strings, punctuated by distant drum machines, layers and layers of vocals singing about depression, dejection, moments of doubt, weaknesses. The album says “this is what’s happening to me, these are the things I’m afraid of, and these are the ways I fail.” Gorgeous music, ethereal arrangements, confessional lyrics, and ear-candy melodies. Robert Smith would blush.

Heridas can be streamed on Spotify, Bandcamp, and Youtube.

The debut album by Valentin y Los Volcanes is filled to the brim with the type of indie-rock spirit that makes every other genre feel pointless and labored. Why would anyone want to make any other type of music? This has everything: moments of furious abandon, moments of introspection, maddeningly catchy choruses, lyrics about the confusing haze that is growing up, “bap bap bap” vocal hooks, guitar lines that sound simultaneously like the best thing you’ve ever heard and like someone trying to feel their way through learning a new scale. Of course, by the time it’s over you remember that music is a gloriously vast world of possibility, and that it makes sense that there are other genres — but for the 38 minutes of the album’s duration, it really does feel like the only music you will over need.

Play al Viejo Walkman Blanco can be streamed on Spotify, Bandcamp, and Youtube.

Lucila Pivetta’s debut album is a gorgeous display of dexterous songwriting and dazzling musicianship. It defies easy categorization, with songs that go from sumptuous folk-pop to 70s-tinged rock to samba to electronic dance music to reggae-tinged crime-procedural theme songs. The production is full and lush, with strings, horns, and various decorative flourishes popping up throughout. And the songs catch you off guard with how good they are: deeply tuneful, but also bold; unafraid to venture away from the poppy hook to chase down a melodic or harmonic idea down a few bars. Lyrically elegant and instrumentally adventurous, featuring many dramatic left turns and a lot of syncopation, anchored by Pivetta’s expressive voice. It’s a truly astonishing collection, and one I’m always happy to recommend to anyone who will listen.

That’s all for this edition of The Greatest Argentine Debut Albums of the 2010s. We’ll be back soon with another selection. If you have an album from this period you’d like us to check out, hit us up on Instagram, or email team@lalalista.com. We will listen with open eyes and open hearts.