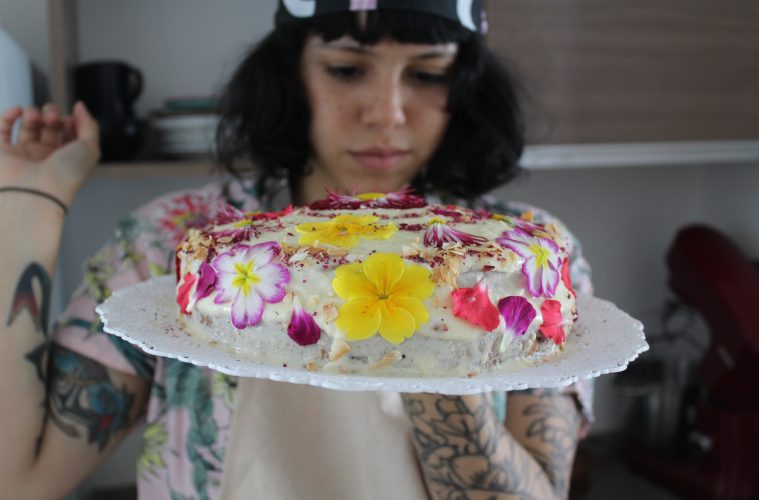 Like a lot of fervent home cooks, Winnifer Cárdenas, a full-time graphic designer for the Ciudad de Buenos Aires, giddily listened to her friends’ insistence that she sell her pride and joy: carrot cake. The recipe, a family favorite passed down from her grandmother, was a special dish in a growing repertoire of chocolate chip cookies, alfajores stuffed with almonds and dulce de leche, banana cake and cinnamon rolls, made on the weekends as a hobby and gifted to her lucky friends. In June, she made her labor of love official and launched Necia Bakery, selling her baked goods through Instagram out of her studio apartment kitchen on the weekends for clients that are quick enough to reserve their slice. Four months later, she already has cafés all over Buenos Aires knocking down her door asking for stock.

Cárdenas eye for visual design is immediately arresting. Her cookies overflow from every direction with nuts and chunky pieces of chocolate, and her lavish signature cakes are topped with a kaleidoscope of edible flowers, every single petal placed with the precision of an artistic surgeon. Her flair for the ornate is exactly what makes Necia necia — meaning stubborn or insistent — not only is everything made by hand, they are made by Cárdenas’ hands, her confections are as deeply personal as they are delicious. But it is much more than looks. With just one bite of carrot cake, I knew this was something special. 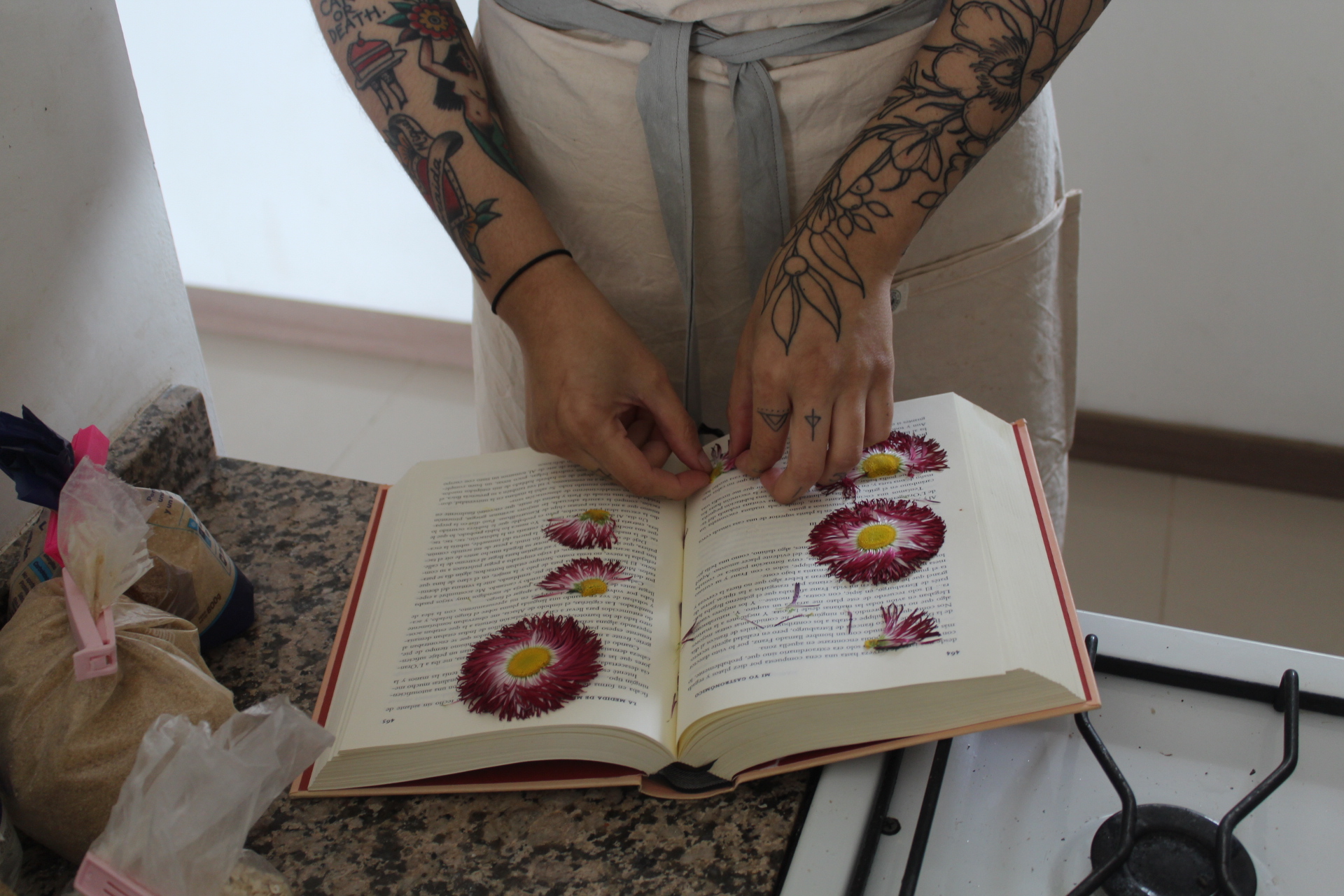 Buenos Aires’ bakers have an innate understanding of bread and pastries. But bread doughs and laminates aren’t the same as batters and cookie dough — local bakeries tend to get stuck in the former when making the latter with confections and baked goods that are often dense and dry. Cárdenas carrot cake is spectacularly distinct. The texture is airy, fragile and ready to burst from the seams. Just a touch wetter and it might resemble a tres leches, crumbling apart under its own weight. It’s almost as if she popped the cake out of the oven and immediately slathered it with frosting or condensed milk, letting it melt down and absorb into the dough. The cake and frosting popped across the tongue, with notes of cardamom, clove and freshly ground nutmeg, unexpected natural scents that paired wonderfully with an intense cream cheese frosting reminiscent of a summer birthday party from childhood’s past.

“My grandfather had a big sweet tooth. There was always dessert in the house. The carrot cake is one of my grandmother’s staple desserts that we would eat on Sundays. We’d peel carrots while we drank coffee,” Cárdenas recounts. “Making carrot cake takes me back to Venezuela, to my home, to our kitchen with my abuela. It’s my childhood. It feels like a part of me. This carrot cake is a tribute to all that and something that I want to share.”

Cárdenas would later explain that my condensed milk hypothesis was false. According to her it’s simply a matter of intuition — sleights of hand learned from years of observation. Her grandmother didn’t have a set recipe. Sometimes the batter had ginger and cloves, sometimes just cinnamon. They used whatever flour was in the cupboard and as many carrots as were in the fridge. As a young girl, she tried to glean directions. The correct flour measurement? Eyeball it. How long should it sit in the oven? Until the house smells like cake. She’s made her own tweaks, like a special care for choosing the freshest carrots she can find and paying careful attention to mixing the batter with a gentle hand. And she calls up her grandmother frequently to ask for old recipes that she dutifully jots down in a small notebook. The result is living out the memories in her imagination with room to ad-lib her own style. And her grandma has taken notice.

“I talk with my grandma all the time. Recently it was my grandfather’s birthday. She called me for tips. She wanted to know what spices I use and everything I do step-by-step. So I recorded all these audios for each step and walked her through it. It’s funny, right, I’m teaching her now,” says Cárdenas. “They liked it so much that the cake didn’t even make it to the birthday dinner.” 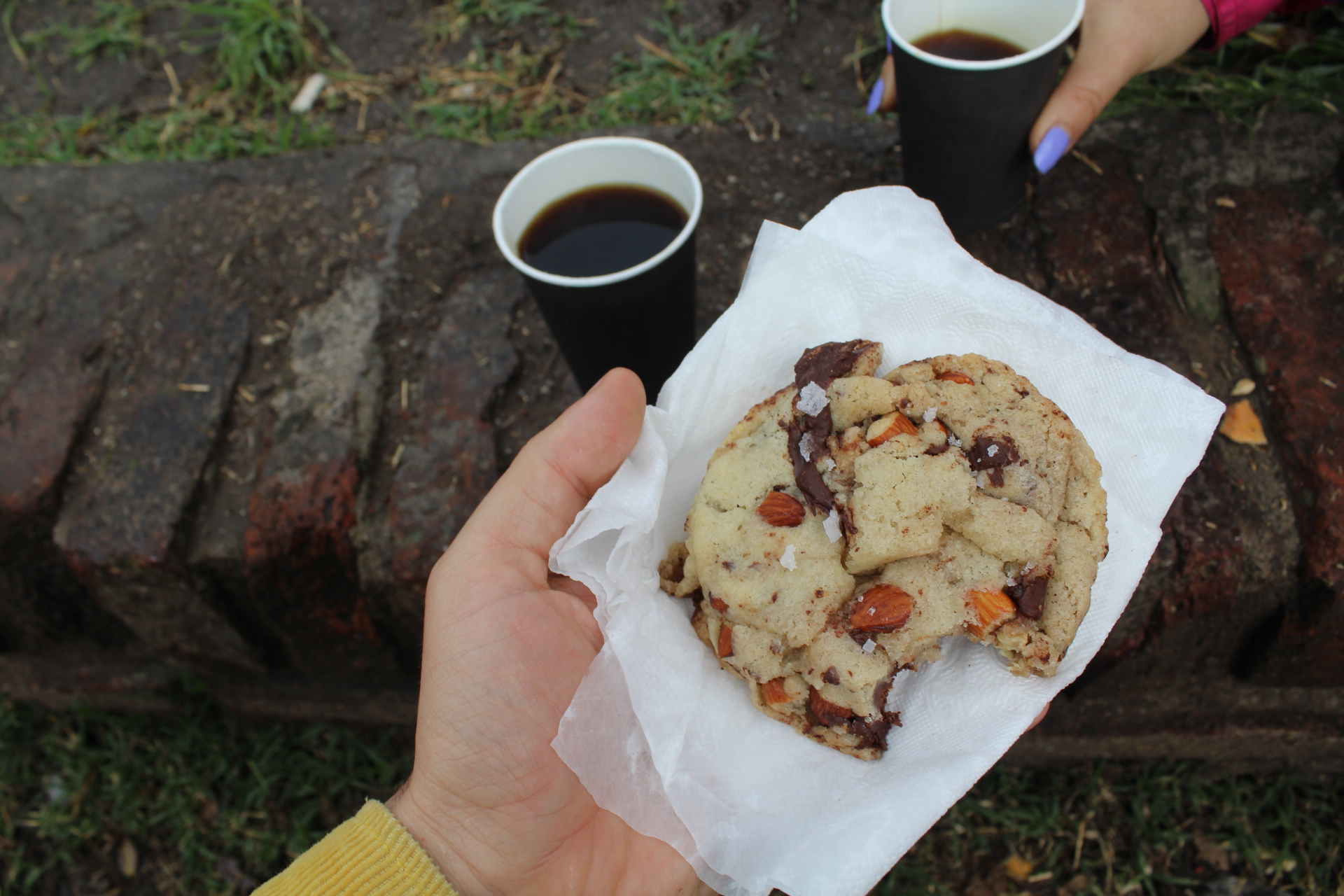 The old-school approach, as well as the limitations of a ‘very poorly designed’ apartment kitchen, cuts her production but allows her to pay special attention to each creation. And it makes room for experiments, like a vegan banana cake with chocolate ganache, pralined peanuts and rose petals or a crumble made with honey caramelized apples. When I visited her during a cake production, I watched her spend nearly 30 minutes carefully choosing and placing flowers, which she presses and dries in cookbooks, and sprinkling a homemade five spice concoction onto her cake, in a total state of zen, like I had momentarily disappeared. Although her cooking style isn’t friendly to scale, she already dreams of opening her own little place.

Until that day arrives, Cárdenas sells on Instagram and is sporadically popping up in open air spaces. On a rainy Sunday afternoon at the skatepark in Los Bosques de Palermo a few weeks ago, Cárdenas joined barista Ramsés Balzan at his pop-up Caffé Infiltrado. With a single carrot cake and two dozen vegan cookies in tow, a crowd quickly encircled her and she sold out in less than half an hour. In line was a regular client who lives in the same building, who traveled into the depths of the parks because she couldn’t wait another day to grab her half dozen cookies.