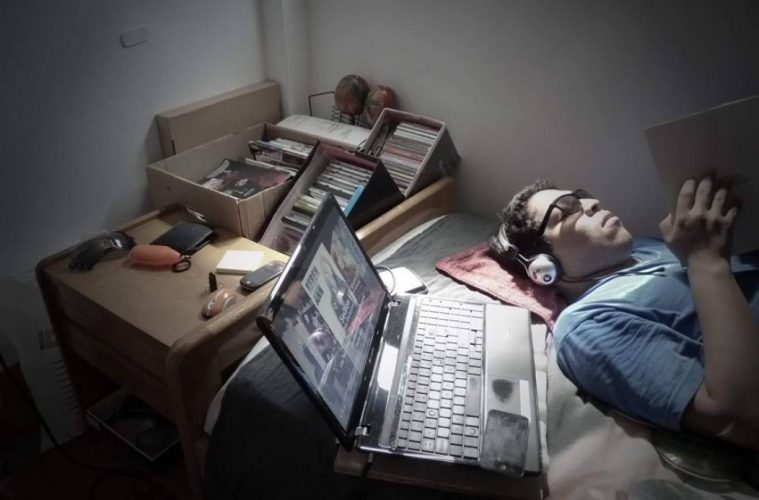 Zezé Fassmor is a Peruvian-Argentinian poet, photographer, videographer, journalist, event organizer, community manager, radio and TV personality, dancer, and, among other things, the protagonist of a documentary that he may never see. He lost his sight at 25, and today, at 32, he avidly documents his life in pictures and videos with the idea that he may someday see again.

Following the presentation of first cut last year as part of La Bienal, the final edit of ¿Qué hago en este mundo tan visual?, directed by Manuel Embalse, will see its worldwide virtual release this 25th and 26th of October, as part of the Festifreak Argentine Film Festival.

I’ve met exactly three blind people in my life. When I was in the third grade, a mountain climber visited our class to give a talk about his experience climbing Mt. Everest. He was blind, which made it extra impressive in our eyes, because any sighted 8-year-old (and most adults) would assume that sight were necessary to complete such a feat. In my freshman year of college there was a blind student in my English class. On the first day the teacher had planned an activity where we would pass around a jar full of small objects, and each student had to imagine the backstory of one of the objects they saw. When the jar got to the blind student, the rest of the class looked at each other nervously. The teacher told him to use his ears to imagine what was in the jar. Of course.

I met Zezé at one of Marfa Nekrasova’s poetry events shortly after moving to Buenos Aires, and we became friends. He’s the only blind person I’ve ever really conversed with, and definitely the only blind friend I’ve ever had. He’s been my only firsthand reference for building an understanding of the ways in which a blind person might see the world differently than a sighted person.

And now that he’s the star of a documentary film, it’s not just his friends who can get in on his perspective. ¿Qué hago en este mundo tan visual? (“What do I do in this world so visual?”), made by Manuel Embalse and filmed in part by Zezé himself, follows Zezé on a trip to the great waterfalls of Iguazú. His adventures in the park serve as the backdrop for an exploration of his imagination, what it means to be blind in the age of Instagram, and more importantly, what it means to see. The film was powerful and profound in ways that I didn’t expect; it made me question my reality, and moved me toward the deconstruction of concepts I hadn’t before thought of as constructed.

We think of the sighted experience as inherently superior – and of course it’s true that sighted people move through this world much more easily than blind people, and have access to far more privileges and opportunities in society – but this world is designed for sighted people. In fact, it could be argued that its design disproportionately favors sight over not only the other four senses, but also more-abstract avenues of perception, like emotions. ¿Qué hago en este mundo tan visual? left me pondering: What would a society designed without sight be like? What would buildings be like? What would transportation be like? What would technology be like? What would social media (one of the film’s main focuses) be like? It would be misguided to assume that all of these things simply wouldn’t have been developed without human sight. They would just be different – they would look different. But in a world designed without sight, perhaps the biggest difference of all, is that it wouldn’t matter what things looked like.

The blind world and the sighted world coexist. They are the same world, but at the same time, not. In some ways it’s like two different dimensions sharing the same space and time. There are things that exist in one dimension that aren’t certain to exist in the other, or at least, aren’t perceived. Embalse makes note of this: we zoom in on a bird wading in the river fifty meters upstream; a butterfly landing on a leaf ten feet away – things outside the realm of Zezé’s perception. Are they really there?

The film touches on some of the fundamental questions of metaphysics: Can something exist without being perceived by consciousness? (If a tree falls in a forest and no one is around to hear it, does it make a sound?) Can we assume the unobserved world functions the same as the observed world? What is the difference between what something is, and how it appears?  On occasion I’ve heard Zezé say that for him, the world is full of ghosts; the people that surround him. To my interpretation, it’s one of those statements that’s intended as part joke, part poetry, and part just-plain-honest observation of how he sees the world – the invisible world and all the invisible people in it.

And, speaking of invisible people – among the cast of characters in the film is an invisible person we all are familiar with: Siri, whose personhood is debatable, but no more so than the realness of Zezé’s vision. Or, as he calls it, his “mirada ficticia” (fictitious view). Siri appears in several scenes with the purpose of responding to some key epistemological questions regarding eyes and sight, asked by Zezé. Through these sequences the viewer is prompted to doubt their understanding of what it means to be capable or incapable of sight; what it means to possess or not possess an “eye.” Is a blind person’s view any more or less “fictitious” than the images that the functioning eye transmits to the brain based on the light that enters it?

On Stevie Wonder’s album Innervisions, he sings one of the great epistemological lyrics of our time: “I’m not one who make believes; I know that leaves are green. They only turn to brown when Autumn comes around. I know just what I say; today’s not yesterday, and all things have an ending.” Wonder was blind since he was a newborn – his understanding that leaves are green and turn brown with the changing of seasons is not based on his eyes’ perception of color, but rather the associations he has learned to attach to those color words, with the question of their meaning then left open for his mind’s eye to interpret. And he draws a comparison between his understanding of color and the collective understanding of time, a concept that derives meaning from its association with other concepts such as days, seasons, moon phases, aging, and clocks, but is not directly perceivable by any of the five senses. But colors and time aren’t make-believe; they’re knowledge. Which begs the question: what’s the difference? Is knowledge not formed through the making of a belief? Is it to be trusted? We often hear it said that seeing is believing, but, to what extent can we really believe our own eyes?

Zezé’s experience, having lived most of his life with sight, is distinct from that of someone who has no memory of what things “look like.” Because he has twenty-five years of visual data stored in his brain to use as a reference, his mind can create images that are much more faithful to what a sighted person looking at the same thing would actually see – but there’s still plenty of room for transgression. At one point in the film, the team comes across a chorus singing in the park, and Zezé voices his delight at hearing a chorus of black singers. A member of the crew says, “they’re all white” and Zezé responds with disappointment, “you killed the situation in my imagination.” The crew member apologizes, sincerely.

This exchange made me think about the diversity of perception that blindness makes possible. With sight, that diversity is homogenized, and an infinite number of potential realities are, as Zezé put it, killed. Like when you read a book and have an image in your mind of what the characters and setting look like, and then the book gets made into a movie and you’re forced to surrender the images your imagination created in exchange for those that appear in the movie. Sight, in this sense, is quite limiting. It’s daunting to realize that there is an infinite diversity of visualized realities that exist in the minds of blind people, especially people blind since birth, that sighted people couldn’t even begin to conceive of.

In one of the clips from the movie, filmed by Zezé on his cellphone as he walks through the airport, you see more or less what would be his view of his surroundings if he could see. You see the people around him; you see them looking at him, noticing the camera looking back and them, and immediately looking away. As children, we’re taught not to stare at people with disabilities. It’s rude; it’s alienating. Watching this clip I found myself wondering, are blind people an exception? After all, they can’t know that you’re staring at them. Or can they? (When I asked Zezé if he had ever felt someone staring at him, he said yes, definitely, and that “they’re probably wondering why I’m so well dressed despite the fact that I can’t see.) While Zezé’s eyes no longer have the capacity for sight, his phone does. A camera, after all, is nothing more or less than a mechanical eye. And it’s his. He operates it. It’s just not connected to his brain. Yet. But in this day and age, the idea that such a connection could become reality is not far-fetched at all.

Zezé believes he will see again some day. But until then, he’s content with his imagination, and confident that in this world, as visual as it may seem, there is much more than meets the eye.

¿Qué hago en este mundo tan visual? will be available to watch on October 25th and 26th for those who register on the Festifreak web page. Click here to view the full schedule for the festival.