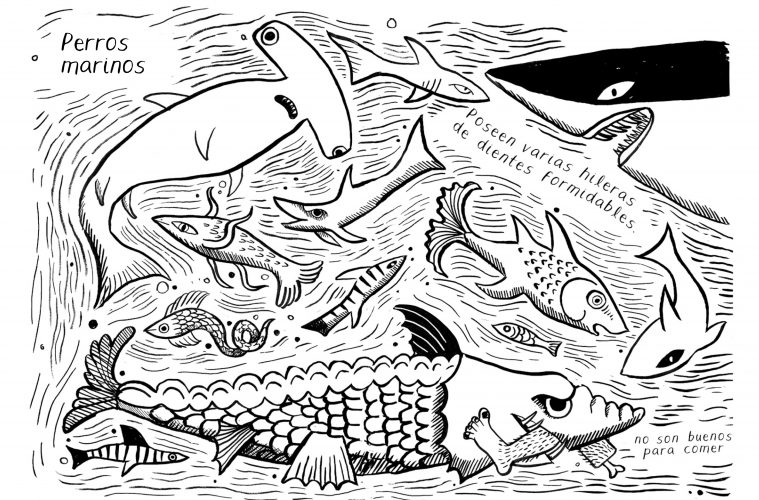 Ltd Edition | Traveling Through Time in the Middle of Quarantine

Welcome to a new installment of Ltd. Edition! With the arrival of spring, not only does the flourishing fauna signal sunnier days ahead, but new releases are also sprouting on the horizon for Argentine comic readers. Despite the quarantine, publishers are slowly beginning to reactivate their activities in a scene that seemed to be more active than ever just before confinement. We will seize this moment and talk about two books that are coming out this month: El Viaje Alucinante (written by Alejandro Farías and illustrated by Mariana Ruiz Johnson), and El Humano (the second published collaboration between writer Diego Agrimbau and illustrator Lucas Varela).

While one of these books travels to the past, the other takes place in a distant future. Both stories explore the relationship between humans and their environments as well as their observation of nature and the beings that inhabit the planet. Without further ado, we raise our sails, ignite the time capsule reactors, and begin the space-time jump!

On El Viaje Alucinante, Alejandro Farias and Mariana Ruiz Johnson join forces to travel 500 years back in time and reimagine the findings of Ferdinand Magellan’s 1519 “first trip around the world,” continued by Juan Sebastian Elcano’s expedition in 1521. It’s based on written zoology, botany and anthropology accounts by crew member Antonio de Pigafetta, mixing stories with illustrations of plant and animal life as well as native populations encountered by travelers around the globe.

The exercise of looking at the past from the perspective of the present is complex and full of tensions. Even more so when it comes to revisiting a period with an immense amount of blood spilled, marking the beginning of the colonial relations of Spain and Portugal on the South American terrain. Fortunately, the authors are aware of this and focus their work on the findings that emerged from the explorations, as well as the peculiar ways in which they made sense of the strange events and beings they discovered. In their introduction to the book, the authors write: “This book is not for those seeking a depiction that is historically accurate; it is, on the contrary, a free and poetic version with which we try to recreate the effects that the sense of marvel and discovery had on these men”.

This free and poetic version of that voyage works as an interesting hybrid that alternates short stories, illustrations describing species of plants or animals, and annotations that contrast what we know today about natural phenomena and life in the region with what these travelers wrote of them upon finding them. Alejandro Farías’s text salvages the wonder of the explorers as they discover a world that is brand new to them, and succeeds in enriching the experience by contrasting that with our current understanding of this phenomena.

Meanwhile, Mariana Ruiz Johnson’s illustrations evoke the style of those artists of centuries past who could only resort to illustration as a form of taxonomy: “I observed the work of medieval and Renaissance engravers and their use of ornamentation, form and space, and I chose black ink with a brush or pen to emulate that type of representation” writes Ruiz Johnson at the end of the book. This technique that mixes her style of illustration with the technique of engraving is highly effective and beautifully accompanies the theme.

El Viaje Alucinante is a book that achieves the difficult task of making something that happened several centuries ago feel new, which turns it into an automatic recommendation for every curious soul, for those who are interested in learning a little bit about plants in the region or strange natural phenomena, and especially for those who enjoy the journey provided by the ritual of diving into a new book.

Having returned from our voyage, it is now time to change our temporal coordinates: we are about to embark on a journey into a truly distant future. El Humano is the new comic by the duo of Diego Agrimbau and Lucas Varela published by Hotel de las Ideas.

A capsule descends from the skies and crash lands on the earth. We see an android emerge from it and we follow her as she struggles to remember who she is or what her mission is in this place. Little by little, she will meet the other synthetic members of her crew, she will learn that her name is Alpha and that she is part of the Phoenix expedition, a specialized team that has been orbiting the Earth for half a million years, waiting for the right moment to descend once the planet has been completely healed from the wounds caused by humanity.

Alpha serves under the command of Robert, the one human in the crew and the leader of the operation. The comic is built around the relationship between Robert and Alpha, with all the right ingredients for a futuristic sci-fi story: the discovery of the abilities that make her a special member of the crew, and the effects that the burden of believing himself the only living human on the planet causes on Robert’s psyche.

We had previously written about Lucas Varela’s work in a previous installment and here we see him return to the genre of science fiction and futurism. As in El día más largo del futuro, he deploys the tools that make him a great illustrator: a great sense of slapstick and visual storytelling, beautiful android designs, and technology combined with a reduced palette that works very well to set the scene of the story. All these qualities are complemented by a script by Agrimbau, a veteran of the comic book writing craft and a skilled explorer of the genre. In his progressive development of the story, he manages to develop compelling dialogue between a human and androids. The questions of speculative science fiction resonate as we are provided a glimpse into the possible point of no return with respect to our ecosystem, as the possibilities of artificial intelligence grow by leaps and bounds.

El Humano is ultimately a very entertaining read whose main virtue is its ability to guide the reader through different emotional states page by page: it begins as a fun story, but gradually becomes gloomier and darker. Like being stuck in a malfunctioning elevator, where the first few minutes are full of jokes and nervous laughter, but as time passes without any sign of assistance, despair begins to set in.

If you’re interested in either of these titles, both El Viaje Alucinante and El Humano will be on pre-sale at a discount until Friday, October 9th.

Meanwhile, back in the present…

Although we can travel with the help of these books to the past or the future, in our current day, the indiscriminate and sinisterly speculative burning of much of the Argentine territory is tacked on to the pandemic, pending the resolution of the “Ley de humedades” (“Wetlands Law”).

In this spirit in which many of us find ourselves, trying to conjure up a bit of hope for the future in the midst of the climate apocalypse, I would like to share a comic strip made by Mariana Da Silva Braga, an Uruguayan illustrator and Buenos Aires resident whom I had very much in mind during these days where it seems we keep watching the world burn.

I hope to find you on the other side of the screen in the next installment of Ltd. Edition, in a world that’s a little less broken, so to go on epic journeys even within confinement.