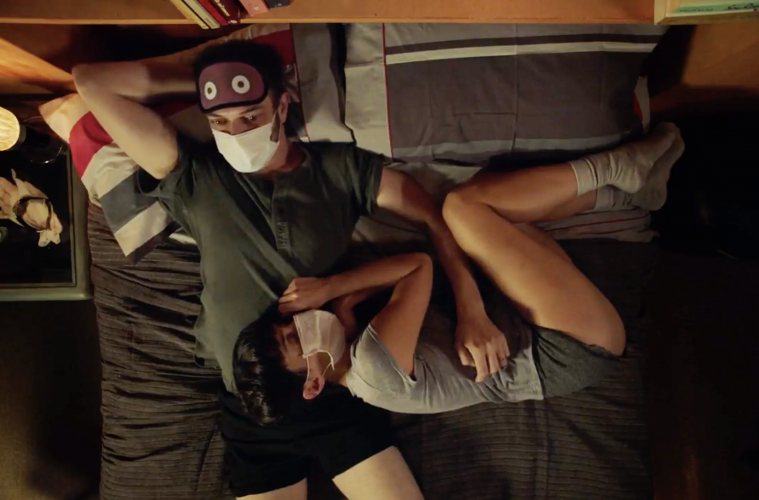 Hospitals overflowing with manic and frenzied patients. Abandoned corpses scattered along sidewalks. Hooded health workers clad in full-body protective suits. Delays at supermarkets with lines of combative, panic-stricken customers. Faces veiled in surgical masks. Public protests quelled with brutal, violent blows from police batons amid clouds of smoke and tear gas. A population overtaken by fear and uncertainty during the spread of a mysterious, deadly virus.

Such scenes could easily form part of an advance copy of TIME’s “The Year in Review”, 2020 edition, in which seven billion people experience the “new normal” imposed by the simultaneous proliferation of different ails: xenophobia, ultranationalism, police killings, and the coronavirus, the latter of which has proven to be the most contagious. Rather, these images, now ubiquitous on televisions and in newspapers worldwide, are from the film Tóxico, written four years ago by filmmaker Ariel Martínez Herrera and premiered in April via CINE.AR, the online platform of the Instituto Nacional de Cine y Artes Audiovisuales (INCAA).  While Bill Gates toted his Cold War oil drum of emergency supplies onto the stage of a 2015 Ted Talk to tell us that the next fallout would not be nuclear but biological, it is Martínez Herrera who has created a stunningly veracious portrait of just how a global pandemic would materialize in the everyday.

Tóxico follows the plight of Laura (Jazmín Stuart) and Augusto (Agustín Rizzo) who, after Augusto’s pharmacy is ransacked, decide to flee an eerie and somber Buenos Aires in a retro motorhome and try their luck on the highways of the Argentine pampas. Much of the paraphernalia that has abruptly become commonplace this year makes an appearance: masks, gloves, social distancing, moderate but steady levels of panic and suspicion. “Every time we come back from outside, you have to wash your hands with hand sanitizer,” Augusto scolds Laura. “The less contact we have with people, the better.”

The health disaster serves as a backdrop to the crisis at the center of the film: that of Laura and Augusto’s relationship. The viral outbreak only slightly exacerbates the distance and sterility already present in their pre-pandemic quotidian routine. “Do you want us to use masks?” Laura asks during breakfast. “You haven’t kissed me in ages, not to mention sex, and you don’t even touch me anymore. When you touch me you wash your hands afterwards.” An irritated Augusto responds, “From my understanding, that’s what you’re supposed to do.”

Muted scenes from the motorhome’s intimate, formica-veneered interior fill the foreground to suggest an underlying, unseen affliction, while wide angles capture empty, fog-swept exterior landscapes that preserve a bucolic serenity. The circulating pestilence — biological, psychological, interpersonal — is ultimately a human problem, and the Argentine pampas remain unaffected in their vastness and imperishability. While Laura and Augusto’s wandering odyssey affords them a nearly calamitous encounter with the provincial police and the acquaintance of a lonely gas station attendant (Alejandro Jovic), nothing prevails in dissipating the futility of destinationless errancy and the desolation of endlessly waiting for a cure that may or may not come.

Tóxico is not a disaster movie, but a relationship drama, with comic cues that stem from juxtaposing typical romantic woes with a fantastical endemic. But its humorous intent is somewhat diminished as, off-screen, such an endemic has turned into a concrete reality.

“It’s all very surprising,” states Martínez Herrera, referring to the striking similarities between his dystopian film, which started production in 2016, and the unprecedented global pandemic that has developed over the past 12 months. “I received a bunch of comments from friends who sent me photos in February, telling me, ‘This is crazy! It’s just like your movie!’” Or, as Augusto tells Laura, “It’s not fiction, it’s real. No joke.”

Tóxico is Martínez Herrera’s second feature, following 2010’s Alas (Pobre Jiménez), which he also wrote and directed. His other notable collaborations include Famoso, a spoof interview show hosted by Martín Garabal and featuring stars like Ricardo Darín, Lali Espósito, Vicentico and Martín Piroyanski, as well as the animated productions Cúmulo y Nimbo and Aventuras de Corazón Roto on UN3TV, the online channel of the University of Tres de Febrero.

While Martínez Herrera’s predictive capacities may be confirmed by such extraordinary current events, the already fragile Argentine film industry has been hit hard. The beginning of the quarantine in March closed theaters nationwide and brought movie production to a halt. Many scheduled premiers, like that of Tóxico, were passed to virtual formats. The national platforms CINE.AR and Contar concentrate the largest offerings while global giants like Netflix occasionally include Argentine movies, such as the recent Crímenes de familia. And while the country’s first theater reopening last month sounds like a step towards cinematic normalcy, it’s likely a false positive: on August 22, the Espacio INCAA Latitud 90º opened its doors on the Carlini Military Base in Antarctica, the only silver screen on white continent, where inherent isolation has kept coronavirus cases among scientists and military personnel to nil.

“Argentine cinema is like taking your dreams, putting them in a meat grinder and seeing what comes out,” affirms Martínez Herrera. If so, the shreddings that make up Tóxico offer a pungently precise depiction of a global pandemic à la 21st-century. When, then, will the minced hopes of Argentine filmmakers once again illuminate the theaters of Corrientes Avenue? When will the credits roll on this all-too-real dystopian epic? When will modern life inch its way back to what was considered, for better or worse, normal?

An exasperated Augusto offers us an answer from the refuge of his motorhome: “All this that’s happening now, we don’t know anything about it. Not how it’s spread, nor what’s going to happen next, nor how to cure it. We don’t have a clue.”

Tóxico has completed its run on the CINE.AR platform, but it can still be streamed on Flow.