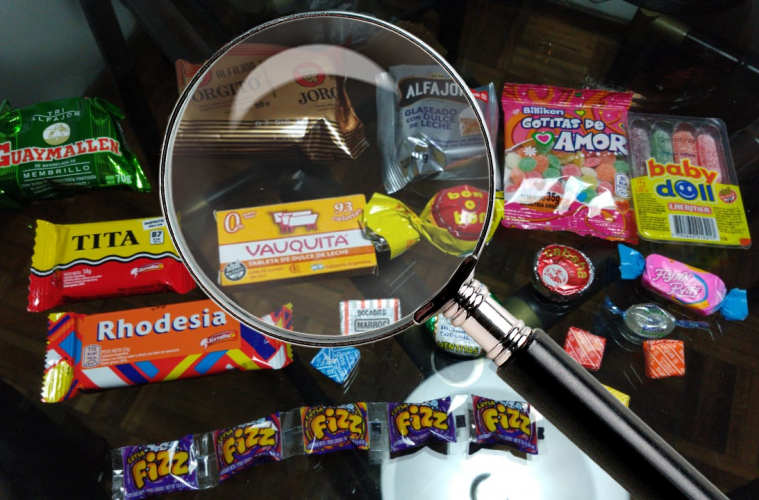 This is the second article in our series on Argentine sweets, with the participation of Estilo Naná. To read the first one, where we discuss various aspects of the culture and idiosyncrasies of Argentine candy, click here.

If I reviewed snacks full time, I’d probably find myself playing it safe like Marge Simpson by betting that all the horses will have a fun time. In my case, I’d be putting my bets on all snacks being tasty and good.

Luckily for you, Naná joins us again, providing this tasting with the seriousness and legitimacy it deserves. Together we will put some of this country’s most emblematic goodies under a magnifying glass — though not literally. We will review them by presentation, aroma, taste, and texture, in a sweet competition where the only winner is our taste buds.

Yes, we may have left some important ones out, but we’ll feature those in future tastings. Or maybe we won’t; maybe you’ll have to join the staff of La La Lista in order to write about your favorite treats. Meanwhile, Naná and I will play good-cop-and-bad-cop of the candy world for a while. This time around, we’ll focus on three alfajores, a wafer cookie, a stuffed cookie, and three bite-sized snacks. We’re staying on the chocolaty side of life, as per Nikki’s recommendation.

Naná says: “My grandfather brought me a whole box from Guaymallén when I traveled to Mar del Plata. Probably because they were cheap. ” This shows us that childish enthusiasm tends to be over the sheer amount of snacks received, not so much for the quality.

The packaging is serviceable. It preserves the product without sticking. We enjoyed that it is the same green as that of the fight for legal abortion rights, even though the green has nothing to do with the color of membrillo. Triple membrillo, the pro-choice alfajor.

Upon looking at it, we noticed that the glaze is not quite uniform. It has a clear and pleasing aroma of vanilla. It is a very good alfajor, certainly for the price. There are some issues with the icing, which leaves a waxy or greasy sensation on the palate. A similar icing of slightly better quality, would be ideal, eliminating the weird final mouth feel. The tops and bottoms are very sweet. Membrillo has good texture. We’re not giving it a 10 because it would be to deny certain weaknesses, particularly in terms of glaze.

Filled with dulce de leche and covered in chocolate.

First of all we have to talk about the look that Jorgito gives us in the logo. It is very unique. It’s also impossible to determine what Jorgito’s age would is; for a child, he has a lot of hair and a somewhat lecherous look in his eyes. But he doesn’t really look old or grown up either. The old Jorgito packaging didn’t feature that look.

The current plastic packaging may not be the prettiest, but we have to admit that it is more functional and more suitable for consumption; you could throw this carelessly into a backpack and it’ll survive without falling apart. Even though the wrapping material changed, the packaging still looks a lot like older packaging while maintaining a retro vibe. The aspirational middle class of alfajores.

The weight of the alfajor is worth pointing out; Jorgito used to come in a 50 gram presentation, and is now 55 grams. Unlike almost all the treats that got smaller, this treat gained some weight. Both Guaymallén and Jorgito have impressive logos. The copper color highlights the retro of the packaging. An inexpensive alfajor but with a coating that is clearly superior to that of Guaymallén: much more generous, thicker, with a good cocoa flavor. The aroma of the cookie has a touch of citrus. There’s also a hint of pan dulce flavor. It leaves less waxy mouth feel than the Guaymallén.

The packaging is very sloppy, of poor quality. It was not properly sealed and it ruined the product. Its packaging seeks to resemble other brands by appealing to the distracted shopper. It is almost a copy of the Terrabusi alfajor packaging.

The alfajor arrived broken and smushed. It lost a lot of icing. It smells like a cornstarch alfajor, but tastes closer to the Fantoche. It’s not very generous with the dulce de leche, even compared to the Día brand chocolate alfajor. There’s nothing to distinguish it, to make it stand out.

To be clear: it is tasty. The cookie is good, but the texture leaves something to be desired. The frosting is very scant and does not cover it evenly. We believe that its aroma had a lot of promise, but the alfajor itself couldn’t measure up. We do not know who makes it. Obviously the public knows that the chocolate Día alfajor is far superior to this one, which is why it’s so hard to find.

We miss the old packaging, which came with a metallic wrapping paper that could be used creatively by bored children. But we understand that the current packaging is probably cheaper and in turn more functional. The fabric of the print is very retro futuristic. The original texture on the packaging was from the 1950s and the colors did not make it to modern day. The current color scheme is not as effective as the classic one.

Rhodesia was an unrecognized state that existed in southern Africa where the current Republic of Zimbabwe is located, so this treat could well be called “Republic of Zimbabwe”. There is an apocryphal story about the beginnings of Tita and Rhodesia, which tells of heartbreak and betrayals, but it’s unverified.

The packaging protected the product and it did not lose its covering, which is of the utmost importance for this treat. It smells of lemon and chocolate. Its covering has the most dark-chocolate flavor.

The wafer is very good. It is light and crisp. Because it is so light, it allows the Rhodesia to be slightly larger than the Tita without its weight differing so much (4 grams difference in 2 cm more product). Rhodesia has more calories than Tita. We believe the filling for both Tita and Rhodesia are the same, and in turn very similar to the filling for Opera cookies — even though Rhodesia and Tita is made by Terrabusi and Opera cookies are made Bagley. Good job, Republic of Zimbabwe.

Just like Rhodesia, Tita suffered from the phasing out of its classic foil packaging. The design of its current wrapping doesn’t say too much. It is a much simpler design than that of its companion.

At this point of the tasting, Naná reveals to me the secret of Tita … they are made with Manon cookies. They are milk cookies, which explains my distaste for them (I’m a Rhodesian girl). I don’t enjoy the taste of milk, which is why Tita doesn’t do it me. Naná finds them glorious. It was the only treat in this exercise that she consumed with gusto, bypassing all pretenses of professional reviewing. The combination, she says, is excellent. Unfortunately the fact that the filling is not correctly distributed spoils the experience a bit.

The wrapping is very beautiful. The perfection of its angles is reminiscent of origami. The stamp also complements the look. Unfortunately, it is a wrapping that does not preserve the product. The foil does not contain the snack in case it starts to melt, which can happen with very little heat. The little heart in the Felfort logo is a beautiful detail. A bit kitsch, but very romantic. They know that their products are made for romance. The size of the Felfort brand is always as large as, or even larger than, the name of the product itself.

The snack has a strong peanut aroma. It does not appear to contain chocolate in its composition, but it does contain cocoa. It is a very popular candy, a fact corroborated in multiple interviews conducted by Naná. It is curious that it is one of Argentina’s favorite treats and yet it does not contain dulce de leche. It has a very solid flavor and characteristics of a fine bonbon. Being the people’s favorite, Felfort really pushed Marroc. Now they have different versions of Marroc, as well as other goodies incorporating Marroc.

We believe that peanut butter’s newfound popularity goes hand in hand with that of Marroc. The package claims that the treat contains almonds but this is not reflected in its flavor. Maybe a little in its aroma. Marroc used to have a darker color; today they are much lighter and softer. They are not very resistant to heat. The company claims it was an invention of Felipe Fort, but we doubt that.

Once again the Felfort logo is bigger than the product’s, and it features a mix of fonts that drives us crazy. It has a very luxurious packaging. Very metallic. It is so bright and the background color is so dark that the product information is practically unreadable. This wrapping is much more resistant than Marroc’s. The paper perfectly copies the texture of the product.

The texture of the creme de menthe is not the best. We find ourselves wishing they had less filling. Something closer to an After Eight, even when the filling of the After Eight is lighter or more liquid. A box of Mentitas, according to its official website (which now has an online store), costs about the same as a box of After Eights but contains literally double the product.

The best thing about Mentitas is the feeling in your mouth after eating them. The fresh minty aftertaste. That speaks well of the product. It is one of the things to look for when seriously tasting a chocolate, when it lingers. I like them a lot because I have the taste of an old lady. But we believe that there is a problem of texture rather than taste.

The wrapping is terrible. The super thin foil did not cover the product. The chocolate was very exposed. Still, their logo — featuring some sort of jumping milk maid — is beautiful.

Upon opening it, we found that the dulce de leche was very hard. Totally disappointing as we were expecting a cascade of dulce de leche. The bonbon fell apart completely. The chocolate covering tore off in chunks. The dulce de leche is rock hard, just disgusting. It hit us in the teeth. We didn’t want to finish it. The quality is appalling.

An indignant Naná said “what a way to ruin a classic national candy by lowering packaging costs. You are Arcor. You are the largest national producer of sweets, and yet you cheap out on the wrapping paper.”

After the fiasco that was Cabsha, Naná and I scheduled the next tasting, which will find us trying lollipops and hard candies. Until next time!