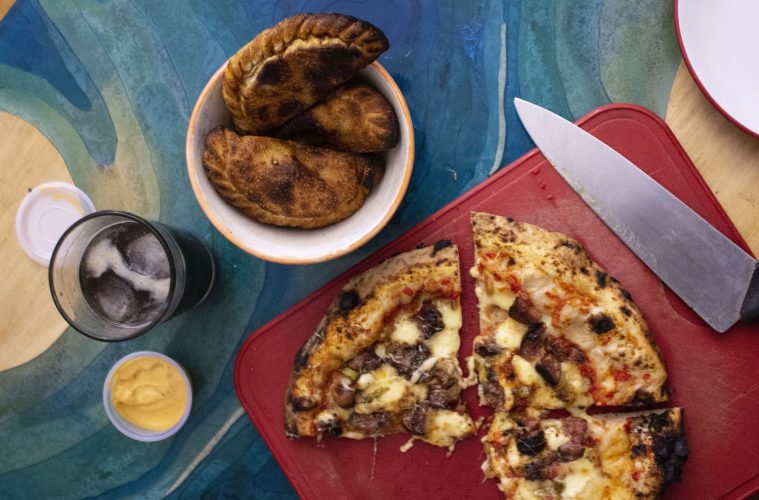 If anything is guaranteed on the other side of this pandemic, it’s that there will be a lot more pizza places to try. I’ve counted 16 new spots run behind closed doors, in dark kitchens and new restaurants that braved the quarantine and opened anyway — all found with a pretty lazy Instagram search.

“I think what we are seeing right now is a lot of very sincere projects [sic], cooks playing around with tradition but also letting themselves create very personal, very unique pizzas,” says José Eizaga of Pizzarpada. I agree.  There are a handful of traditionalist Neapolitan-style shops, but the new scene is dominated by young chefs trying to make sense of the pandemic with a simple to understand product for consumers while taking risks and playing around with personal cravings that challenge the fanatical relationship to porteño-style pizzas. Here are three brand new projects to give a try.

And remember: it is important to be conscientious of how we support restaurants. Before making your order, please think carefully about supporting restaurants directly and not tossing your money at third-party foreign apps that don’t care about us, our economy, their freelance employees or the businesses they serve.

Daniela López Camino and Mauro Busquet Moriconi met each other years ago in a cooking class. Both have long run their own projects — she makes a variety of sauerkrauts, kimchi and hot sauce with her aptly-named La Fermentadora; he bakes sourdough, focaccias and other fermented breads with Fornole, named after his ancestor’s hometown in Italy. Together they began leading classes centered around, you guessed it, fermentation, and since June have begun making pizzas together, sold twice monthly out of their Villa Ortúzar fort. Recently, they installed a wood burning oven on the terrace and neighbors are crossing their fingers that FF Pizzas becomes a pizzería del barrio.

“My favorite food is pizza. Mauro was making pizzas on his own that were maybe a bit more classic and I’d always throw weird ingredients on top. We always were messing around with that and I joke with him all the time that the margherita is so boring and muzza es la muerte,” explains López Camino, “Together, we are both really into fermentation and experiment a lot with that, and with the pizza, we have really given ourselves a lot of freedom to be creative and have fun and not feel like we have to be traditionalists. We play a lot with the colors, flavor combinations. We pay a lot of attention to our vegan pizzas, we have three, and those are what sell the most.”

The pair’s individual sensibilities are on full display — the dough has a delightfully dense chew and a deep sourdough flavor that is highlighted by pops of loud fermented nuts and vegetables and the fresh pops of flavor from the mostly organic ingredients. And despite López Camino’s aversion to muzza, the duo makes a really good one, probably because of the touch of pesto spritzed on top. Get risky and order the Jardín Secreto, a kaleidoscope of edible flowers, fermented onions and cilantro that sit atop creamy goat cheese, or the Hit, a vegan version with a laborious almond ricotta and charred tomatoes.

To order, stay tuned to their instagram, where they announce upcoming pizza events and menus.

When the pandemic hit, the team behind La Favorita Cantina in Palermo began experimenting with pizza under the indisputable, perfectly named Gordo Chanta with an emphasis on small daily productions, seasonal ingredients and independent producers. It makes sense for the crew — Favorita has stuck out for playfully reinterpreting porteño lore and the city’s most ubiquitous dishes. Still, pizza was new territory.

“We opened in April and the pizza we are putting out now is really different. We’ve come a long way developing the recipe,” says Juan Carlos Ortiz, “Our pizza is a mix of different styles. It’s not a neopolitan, it’s not porteña, it’s not New York style. I’m not from any of those places so I felt like [sic] better to leave those styles up to the ones who really understand them. We have created a mixture of all the things that we like from each and combine them in a way that makes sense for us.”

The team, rounded out by Pablo Martina and Sergio Maffei, has placed a lot of importance on the dough, searching high and low for the perfect flour before settling on an independent flour maker from Bahia Blanca. Pizzas are cooked in a brick oven with quebracho to create a soft, chewy border that bunches up just enough to hit the tongue with a light char. The same care is placed on the rest of the ingredients. Ortiz continues, “It is important for us to support local producers and not mess around too much with the ingredients. We’d rather let the ingredients speak for themselves.” Flavor combinations play with tradition with hints of personal innovation: roasted fennel with salciccia, Mar del Plata anchovies with red sauce or kale with pickled red onion. They are busy working on the spring menu with a selection of ferments, like banana hydromel, being developed by bartenders Meli Manhattan and Alexander Martinez.

For now Gordo shares the space with Favorita, meaning you can and should combine your order with some empanadas: chopped beef in a vibrant tomato sauce that comes with a creamy, chipotle-leaning hot sauce. And be sure to take advantage of their curious selection of boutique wines, like Pet Nat Pinot Noir by Pintom, Semillon by Puercoespin or a Criolla by Criollaje.

Pizzas are available Thursday through Sunday evenings and delivery is free within a 20 block radius (from Honduras and Godoy Cruz). Orders via WhatsApp 11 6032-2798.

Making pizza was never part of José Eizaga’s plan. The Venezuelan-born chef was gearing up to open an arepa joint after an intensive, continued investigation of corn throughout the Americas and lost food traditions of his native country. When the city went into lockdown, his regular gig slashed his salary in half and he was left with an empty rental in need of a quick solution. He bought a pizza oven and a fridge and started playing around with New York and Neapolitan pizza recipes to develop a light, fold-friendly pizza dough topped with playful ingredients.

“This is the pizza I want to eat. I buy artisan cheese from Santa Fe. I’m using seasonal ingredients and playing around. I use pickled chiles and jalapeños. There is a pizza with honey. The most important thing was to make really high quality pizza that was also personal,” Eizaga explains.

The honey-topped pizza he is referring to is PDC, which is also topped with smoked panceta and pickled chiles. Dough is extra thin and places special emphasis on a rich tomato sauce and a creamy cheese, shredded so it melts down and bubbles and browns, that has just a nudge of sharp tang. Although his vision is unique to the surrounding pizza shops of Villa Crespo, the neighbors are starting to take notice. Eizaga is becoming more and more comfortable with the idea of keeping up a neighborhood pizza shop. “People have said some things that were not so chevere, but mostly they’ve responded with comments that were very chevere. There is a neighbor across the street that has come 10 times already.”

Be sure to pair with a lata from Birra Perro — a light bodied Pilsen pairs excellently with Eizaga’s loud flavor palate. The shop is open Tuesday through Sunday, “starting around 5pm” until 11. You can pop in to order at Gurruchaga 381 or order via WhatsApp 11 2768-8330.