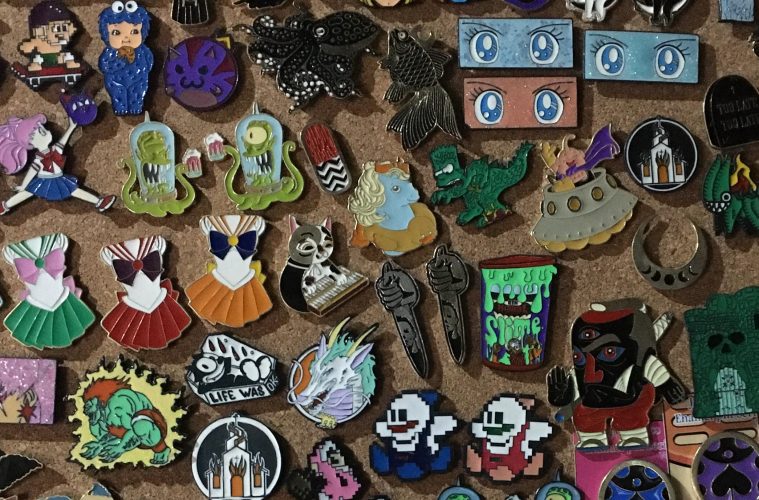 Hi folks! Normally I would find myself telling you about the Argentine indie comics scene, but this month I decided to make a little detour to another subject that interests me greatly: the rise in popularity of local enamel pins, and their DIY producers in Argentina. Most commonly, we find pins on backpacks, in political campaigns, or adorning leather jackets with band logos. But along the way, the art of making enamel or lapel pins (hand-painted metal pins with a specific shape) became a practice that encompasses design, pop culture, and a tongue in cheek humor that toes the line between graffiti and internet memes. The end result is an object that serves as both a fashion item and as a collector’s piece.

In Argentina, enamel pins have become a beautiful and ever-growing niche. In the last 5 years, several creators have emerged, bringing their vibrant designs to the public. They display the emotional education of the Millennial generation: a tremendous influence of American cartoons from the late 80s and 90s, anime classics and Japanese culture (basically, what children and adolescents all over Latin America consumed through television) remixed with meme macros and other avatars of internet culture. Without further ado, I present to you a specific constellation made up of 3 of the main active pinmakers in Argentina, with whom I was able to exchange emails to learn more about their process and their personal relationship with the art of pinmaking.

Deriving his pseudonym from the Smiths classic “This Charming Man,” “El Encantador” brings together his roots in hardcore punk and his love for Japanese manga and anime to design his pins. He started his journey with the motivation to generate income to help support his parents’ medical treatment back in 2013, inspired by foreign makers he saw online. He decided to do it himself after a year spending a year in search of a local workshop that could produce them, learning all about the process: “Being an active part of the hardcore punk scene, I have those values of DIY very deeply ingrained”.

Luckily, he managed to find a space that produced medals for sporting events and military decorations, and began to produce his own work there. Being one of the first pioneers of the local scene, he was also a beacon to other people interested in making them, sharing his knowledge of the process instead of monopolizing the information. “The workshop where most makers can make pins is 90% of the time the same workshop where I make my own, and to this day they continue to thank me for having helped them open the doors to new jobs and clients.”

A constant factor when assessing his work is collaboration, both as part of his production process and in the relationship with the public that buys his designs. “The common thread tends to be contact with the rest of the world, not just a simple and detached exchange of money for product.” For example, he talks about the story behind one of his pin designs: “When my father was having a really bad time, I wrote to the members of UNBROKEN (pioneering hardcore band of the 90s) and asked their permission to make a pin that featured their iconic line ‘life. love. regret.’ and without hesitation they said yes. They said that if it was for a good cause I didn’t even have to ask them. And some time after that, they reached out to me to find out how my parents were doing.”

Currently, Ese Hombre Encantador produces pins and T-shirts in limited batches, taking advantage of any free time provided by his day job to create the pins and, with the help of illustrator and designer friends (including God Hand Designs) work on collaborations, always announcing presales through their Instagram stories, making an effort to keep prices as affordable as possible, with the cross between cult anime and hardcore fandoms as their trademark..

It was precisely thanks to Ese Hombre Encantador that Julián realized that there were independent pin designers at the local level, and in 2016 he and a friend designed their first pin, without knowing that it would be the first of many: “when I sent the files for the pin for manufacturing, they didn’t give clear instructions on how it had to be done, so what I sent was more along the lines of screen printing. That first pin came out wrong, but at the same time it looked like a vintage pin. Luckily people liked it, and it ran out pretty quickly. Years later we released it as it should have originally come out.”

That first experiment would be followed by many others, forming a series of over 40 models since then. His love for the Godzilla film saga, anime, cartoons, music and video games are the compass that guides his designs. “All the models I put out, including collabs, are kind of ‘connected’ to each other because of my personal taste.” Currently, Ethereal Cloth has generated a cult following based on its original designs and the quality of its pins.

Julian’s evolution in the assembly process has been remarkable. “At first, I would send the final design of the pin and the factory would return the finished product, ready to sell. In those years there were a few models that I intervened, such as adding a layer of glitter. But these last few years I’ve been painting everything myself.”

The DIY spirit is a fundamental part of ETH, who builds packaging from home in addition to painting each model, making some limited presentations such as “the Godzilla vs. Mechagodzilla VHS boxed set,” or “the recent Endoskeletor model that I released, which came out in a music cassette box,” generating variants of different colors for the pins, etc. “Although it takes me three times as long and my back is already demanding a break.”

As with his illustrations, his approach when designing his pins is the clash of innocence and childhood nostalgia mixed with online meme culture. Characters from his childhood, like the elephant Babar, appear mixed with great YouTube hits like “the girl from lofi hip hop radio” or “the coffin dancers”. His pins also generate an interesting mash up of local meme culture and pop icons generating models such as the 8-bit Gauchito Gil or Sailor Bisman.

Although Sepu doesn’t (yet?) paint his own pins in a homemade way, he maintains the same attention to detail in packaging and design as his predecessors, adding value to the final product process from the total design of the product: “I pay a lot of attention to the design of the card in addition to adding a sticker or something related to the design. The pin itself is put together in the factory.”

In this profession — a sort of modern goldsmith — the most powerful factor is the way it captures a cultural zeitgeist with heart set on a DIY object, all with the intention of adorning someone’s favorite bulletin board or jacket in a personal way. As Sepu says, “more than anything I like to make a collectible item. Because pins can be made by anyone, but when you put your heart into it, it shows.” I don’t know if anyone can do it, but I’m definitely glad that great pins are being produced independently in Argentina and there is no pandemic to stop them.