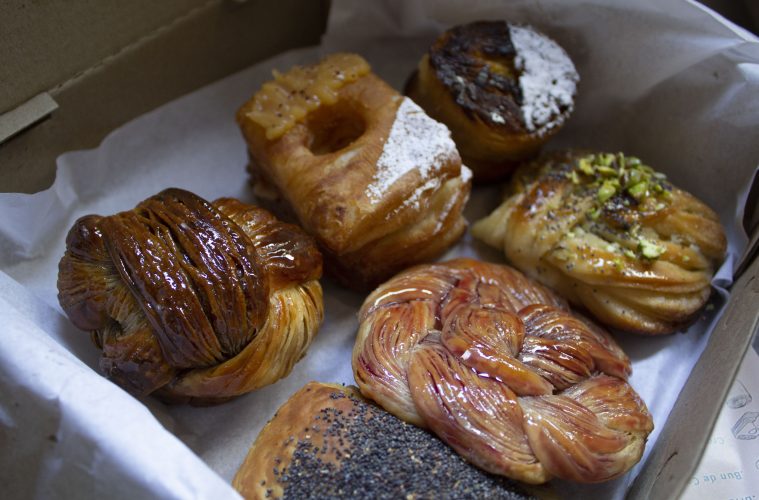 Please Feed Kevin | Catch You in the Plaza

The other day I got an email from Google Maps showing me all the places I’ve been in the last four months. It was just a dot on my house. Is it just me or has anyone else been furiously switching back and forth between wanting to move to a little island in Tigre or a house with a garden in the Conurbano and maybe I’ll just come into the city every once in a while and sleep in a pension but never live in Buenos Aires again and then takes a bike ride and you see a tree and a plaza and a really pretty building and life in the street and realizes how much you love this city but then you go back inside and NO fuck this place maybe you do actually want to buy that old Jeep Cherokee and travel around the country to try all the empanadas and chipa with your dogs and never be confined to an apartment ever again?

For now, I’m settling for the occasional solo mate sesh in the park and calling it a day. Here are the things I have enjoyed with said mate while dreaming of anything but the little dot on the Google map.

And remember: it is important to be conscientious of how we support restaurants. Before making your order, please think carefully about supporting restaurants directly and not tossing your money at third-party foreign apps that don’t care about us, our economy, their freelance employees or the businesses they serve.

Despite a large population of Paraguayans living in Buenos Aires and the Provincia — the largest Latin American population across Argentina as a matter of fact — there is a noticeable absence of Paraguayan food in the city. Cook Gladys Martinez is originally from Ciudad del Este. When her husband, Luis Benitez, had difficulty reopening their Retiro restaurant-bar during quarantine, she began putting together boxes of dishes typically associated with holidays and festive get-togethers alongside daily staples. Martinez works out of her Longchamps home and Benitez delivers around Zona Sur and the city’s south side, aided by his sister, Ruth, who helps out with social media.

Every day of the week you can put together your own box of home-cooked Paraguayan recipes. Food is made fresh every single day, and if you’re lucky enough to be early on the delivery route, your rations will be delivered warm out of the oven — tubular croquettes made from minced beef, cheesy mandioca empanadas and payagua maskada, fried cassava cakes stuffed with ground beef. We opted for the classic chipas, chewy and fragrant with pops of anis. If you opt for a box típico, you can also have dinner covered — chipa so’o, a flakey corn bread stuffed with more beef, and sopa paraguaya, spongier and melted down with lots of queso fresco. Orders are taken a day in advance.

Cook Nicolás Claverie spent six years working across the UK. A briefer-than-planned move to Japan, in which he tried to throw himself into restaurant kitchens, wasn’t as easy as he had hoped. Back in Buenos Aires, he bounced around between a full-time gig in Caballito’s eclectic Luce and practicing his ramen technique.

“In Buenos Aires, a lot of the ramen I have tried is really obsessed with the stock, whereas in Japan, what I saw was a lot of emphasis on the noodles themselves,” Claverie explains. It makes sense that he would feel so comfortable with maniacally technique-specific preparations like medialunas, sourdough bread and a gambit of pastries from around the world.

Pastries are delivered every Saturday omakase-style — you can order a box of six pastries made with whatever Claverie finds at the market and is craving that week. Two Saturdays ago, I enjoyed brioche rolls candied with vermouth, cardamom buns topped with chunky pieces of pistachio, maze-like hibiscus braids and cronuts with lemon and blueberry glazes. There were also pastries new to the non-connoisseurs, like tebirke, a Danish poppyseed pastry he stuffed with peanut butter and kouign-amann, from Brittany, a croissant pastry stacked like a sugary tower that he filled with kumquats.

Stefan Ditzend is an ice cream consultant — let’s all let ourselves be jealous of that for just a second — who started Cono Sur after having to give his classes and consulting a rest during the pandemic. Unlike your kiosco cones, Ditzend makes every cone by hand from scratch and for not much more, running at $200 a piece that can easily be stored in your freezer. So far I’ve tried the classics: chocolate with hazelnut and dulce de leche and am excitedly hoping to get my hands on their more creative varieties like coconut, ginger and lemon grass, black sesame sambayon, caramel with maracuya and mascarpone with salty caramel and pecans.

Cones can be picked up Wednesday through Saturday in Colegiales (the address is private and feels like a really fun drug deal) or across the city in different restaurants: Del Pratello in Las Cañitas, Narda Comedor in Bajo Belgrano, Comedor Diario in Palermo and Citadino in Parque Patricios.