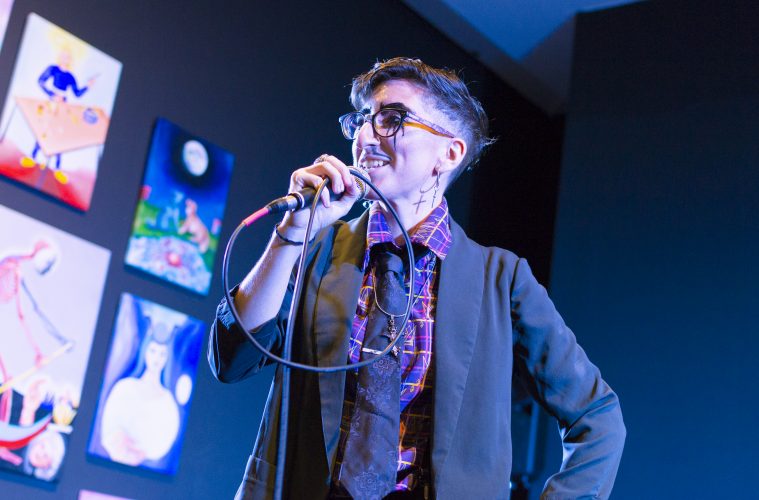 Drag Kings of Argentina | Bringing Visibility to a Vibrant Movement

It feels as if it was just yesterday that we were talking about drag queens from different parts of this beautiful country. Well, that’s probably because I’ve been working on this piece even before I finished the previous one. You might wonder, “Magu, why didn’t you mention anything about the existence of Drag Kings in the previous article?” Well, that’s simply because I didn’t want to spoil this one, friends of the queer, the dissident and the performative.

I do have to admit that, in all my years of living and working in the Buenos Aires queer nightlife, I don’t know as many Drag Kings as I would like. I would even dare to say that Drag Kings are rare. And what is a Drag King, anyway?

Luckily for you, I won’t be the one answering that question. Instead, we’re interviewing Armando A. Bruno (a name that serves as a pun on “armando a Bruno,” or “putting together Bruno”). Drag King, Father of the House of Knights, creator of Carrera de Reyes, queer artist and visual arts teacher. He will serve as our guide through this journey of dragscovery.

Below is a translated version of our interview.

What does drag mean to you?

Drag, for me, is an artistic expression that is deeply rooted in a tradition within LGBTQI+ culture. Above all, it is an artform. An examination of gender, but stemming not from the question of sex, but from the relationship between an expectation and a role, determined by certain types of policies and mechanisms in society. It questions what gender is, and that relationship between gender expectation and role. It’s also a play on genre. That is something that can be seen a lot in drag. Why do we use a certain type of fabric? Can we use our materials to explore a genre within fashion, within design? That’s drag to me. I approach it that way, as a question about gender expectations and roles.

What is a Drag King?

This is a question I tend to shy away from because it is difficult to answer without falling into binary stereotypes. Based on the definition of drag we just discussed, we could say that we live in a society that has certain codes. Certain expectations and roles to fulfill, in addition to aesthetic constructions around this system. For me, Drag King is the construction of a drag person or drag character that has to do with masculinity. That its signifiers, its points of support, its references are born from what is socially understands as masculine. In that sense it is a constant introspection and extrospection of what masculinity means to oneself and to others. That’s the space from which a Drag King is built.

How did you become involved in drag?

It was quite fluctuating. It very quickly went from a hobby to a profession and suddenly ended up being what my drag is today. I could say that it started when I started cosplaying. My first cosplay character was Edward Scissorhands. At that time I understood myself as a cis woman, so it was definitely like crossplay (dressing up as someone of the opposite sex). These were my first approaches to experimenting with my presentation.

As time passed, I toyed with more masculine characters, it was like I was inhabiting masculinity a little more in my body. Then I started to feel that cosplay limited my creative side. Then I found drag. At the beginning it manifested itself as an alter ego to be able to take certain photographs as an artist. First it was an alter ego with which I could work under the name of Armando A Bruno. Later, when I started to get more insight into what was happening to me and what drag was, I wanted to express it directly within the context of the local drag scene and there I was able to bring it out more to the public. This was in 2018, but since 2016 I began to inhabit drag outside of cosplay.

From the outside, the world of cosplay always seemed quite hostile to me. Especially for women and minorities. What was it like to start there?

I started out as something very personal. A very DIY hobby. When I started to get closer to the social aspect, to events, to conventions, I began to notice differences. Within cosplay it is very common to see cis women portraying male characters, but rarely the other way around. That is something that is taken for granted. It is a world that, at least within the time I inhabited it, was very homophobic, very transphobic, very fat-phobic and racist. If you are going to portray a certain character you have to fit physical appearance of that character. Therefore, if you are not equal to the character, they don’t think you should portray them. Even if you have some kind of affective bond with the character. Many times that led me to settle for making certain characters. But as soon as I got away from that environment, I noticed how much it had affected my perception of my body and those of others. It was very liberating to get away from that environment. I still do have a lot of affection for how much I learned about the art of transforming.

In contrast to drag queens, there is very little Drag King representation in mass media. A part of me believes that it has to do with the fact that this kind of “parody” is well regarded when creating a female character played by a cis male.

I feel the need to differentiate between performative crossdressing from drag. On television we are very used to seeing the former. But we are not used to seeing, within cis binaryism, cis women playing male characters or recreating male personalities. Maybe Anita Martinez… I remember seeing her on television performing as an older man character. But I think not on television. The first time I realized this was watching the movie Hedwig and the Angry Inch. Yitzhak’s character is one of the first characters that approached what would be a Drag King. Clearly there are other sides to that movie. Questions about gender and not just about drag, questions about identity.

As for the parodical aspect, this is where I think there is a difference between performative crossdressing and drag. It seems to me that, at least as far as drag is concerned, it is minimizing a lot to reduce it only to mockery or parody. Drag incorporates a lot of comedy. Comedy is in its essence. Not only from the satire or parody of gender performance, more a question of gender understood as something that is everywhere, not just in our genitals. Not only in our identity. We are constantly building genders when it comes to speaking and communicating. When living in society, these genders rule and oppress us. Drag within your comedy can challenge those rules. I don’t think it’s intrinsic to drag to poke fun at a gender. Even for many people, it is a way to commune with one’s own gender, an expression of one’s own gender.

I found it difficult to find my place. That’s why Carrera de Reyes emerged. The goal was to provide a space that would promote and enable Drag King art. A place where people know they can go be a Drag King. Often, there’s hostility towards Drag Kings. They are made invisible. Carrera grew out of the desire to create a space where people could get closer to experiencing the Drag King style. Making it visible, putting it out there.

And how do you envision the future for Carrera de Reyes and for yourself?

The future of Carrera de Reyes has to do with being able to see new kings. See our kings grow. See them inhabit other spaces within local queer culture, such as ballrooms and other contests. That the titles granted within Carrera de Reyes have recognition. Give them prestige within the community. That beyond how difficult it can be to do Drag King, that having gone through a race makes it easier for you to inhabit a contest or ballroom where there are also drag queens. That at the end of the year, the title of “King of Kings” that we grant is recognized in other events and in other spaces.

I’d like to keep working on Carrera with the people I love. Dandy Dust, Vinito, Marta Delicia and Felicitas Quispe. They are great artists, great friends, and great workers. Today, during quarantine, we work pro bono. Only collecting what will be used as a prize each night. Personally, I’d like to keep growing in the House of Knights and also being able to inhabit the ballroom scene even more, win some titles.

The performances that can be seen in Carrera always seem to carry an extra degree of militancy. Do you consider it to be something typical of drag?

I think it has to do with who is doing it. Sometimes those of us who are there build and influence the show, and those who come as spectators share our ideals. Drag is a great opportunity to express yourself politically. The political is constantly at stake within drag. We are expressing our political position all the time. Something that makes us fall in love with career kings is when they give it passion and commitment. If they want to make us laugh, they make us laugh. That if they want to make us cry, they make us cry. That determination to put your heart into things, helps us empathize with what happens to them. It is one of the best characteristics that Carrera’s Drag Kings have.

How does Carrera de Reyes work?

Throughout the year we do different contests with a realness, a fantasy, or a theme. Whoever wins that contest takes the crown, the king of that fantasy is crowned. At the end of the year all kings compete against each other to be the king of kings. Andres is the current reigning king. The event is hosted the last weekend of each month. This September we’re having the seventh race of the year and October is the last one before the grand final. In November they compete for the king of kings.

Also, from House of Knights with Andres and Nikola Nyx we are doing “House of Knights Presents” on Twitch. It’s a more varied drag show, featuring local and international ballroom artists. This happens the second Saturday of each month and the proceeds are donated to the Mocha Celis school.