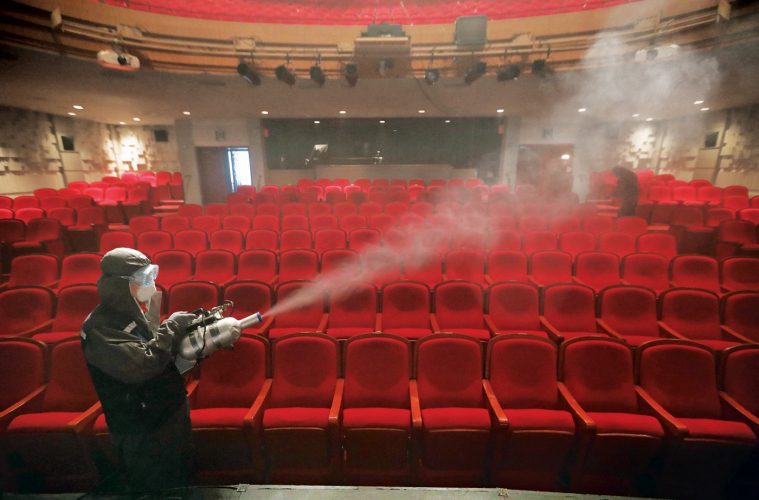 Off the Marquee | Let’s Make Our Own Quarantine Film Festival

The name of this column is Off the Marquee. It was meant as a jokey reference to the fact that the films that we highlight on a monthly basis tend to fall along the margins of popular cinema, with titles that are very rarely emblazoned across bright, flashy marquees. Independent films, foreign films, weird and off-kilter works of new and original voices, decidedly and gladly removed from big-name Hollywood. It’s a vibrant and diverse scene. It’s worth highlighting.

It is now a couple of years later, and the Covid-19 crisis has sadly given the name of this column to a more literal meaning. The film industry has ground to a halt across the world, both in exhibition and production. Everything’s off the marquee right now, in a very real way.  Theaters are closed down, projectors and seats gather dust before a sad, blank screen. And while some theaters are starting to slowly reopen in some markets, things won’t quite go back to normal until we’ve found a permanent solution to this mess.

And y’know what? I am fucking sad about it. It bums me out beyond belief. I know we’re all hunkering down and that’s the right thing to do but I just miss movie theaters. And though my own TV at home can produce an objectively better picture, I miss the ritual of it, the feel of it, the discovery of it, the undistracted and isolated protocol of it. Even the annoying audience members. I miss it all. And I especially miss film festivals.

Now, I don’t mean to make this a maudlin lamentation. We’re in this situation, there’s not much we can do about it, so we must soldier on. What I have for you here is a list of recommendations. And these all happen to be movies I’ve found through film festivals in Argentina. I’ll tell you why I love them, and where you can watch them digitally. Because film festivals will return at some point; in the meantime, we just have to make our own.

So, part of the reason I fell into a tailspin of film-festival-related sadness is this movie. No, the movie itself didn’t make me sad, but thinking about it did. The kind folks at FilmScout reached out to me a few weeks ago to ask me to write about a movie I love, and this got me thinking about this 2015 Zellner brothers gem, which I first saw at the Buenos Aires International Independent Film Festival. You can read my full review here, but the cliff’s notes is: Kumiko the Treasure Hunter is a gorgeous film that serves as a love letter to the Coen brothers, deals with themes of communication and social isolation, and mines awkward social interaction for humor. It is beautiful to look at, it is funny, and it is all the right shades of sad. You can find it on Stremio, which is a torrent streaming app I’ve written about before.

If you’ve ever been a bored teenager without much to do during summer break but quietly hate your life with a simmering passion, you’ll find a lot to love about this beautiful French Canadian film by Stéphane Lafleur. Told in black and white, the film toes the line between a typical ennui-ridden coming-of-age story, and absurd surrealism. Another BAFICI find that I recommend to just about anyone who’ll listen, also available on Stremio.

What can we say about La Flor that we haven’t said before? It is epic in every sense of the word — a 16-hour journey through multiple genres, styles of storytelling, and film stock. It’s one of the most unique films that has ever been released, courtesy of Pampero Cine. We’ve already written a pretty extensive guide to the work of Pampero, so I’ll let Magu tell you about it. This movie is available (in installments) on Kabinett.

Now for something considerably more brutal. In Holiday, Isabella Eklof delivers a masterpiece in angry, confrontational filmmaking that doesn’t cross the line into unhinged. It is a remarkably disciplined film, and not for the faint of heart, as it delves into a world of cold-blooded crime and excess. Several walk-outs during the screening of BAFICI where I caught this wonder. What streaming service would be brave enough to host this? The answer is: none. Another movie you’ll need to turn to Stremio for.

Animals is a killer film with a killer soundtrack. It starts out as a very simple story about very complex characters, unveiling masterfully into a layered, orchestral piece about confusion, doubt, and the dichotomy between the instinctual and the spiritual, the Apollonian and the Dionysian, stark silences and imaginary voices. It’s at times devastating, at times darkly humorous. And though it gets pretty out-there (as it does in a wonderfully executed climax that manages to feel Hitchcock-grandiose), it breathes confidently and never lets artifice and contrivances distract from the heart of the story. It’s an exploration of teenage doubt, and as such it is murky, at times confusing, and deeply emotional. Thank you, Stremio, for all you do.

That was pretty heavy. For something considerably lighter, Juan Villegas’s romantic comedy about lost love might be the way to go, if you don’t want to spend much of your evening rocking back and forth in a corner. Yes, this movie has a lot of elements you’ve seen before, but it’s such a charmingly presented package that you don’t really mind. A kind of cinematic comfort food. Stream this one in Cuevana.

I was recently struck by the realization that many of my favorite movies are centered around terrible things happening to young children. We could explore this a bit further, but let’s not. Instead, you should watch this haunting and emotional Italian film, which brings a dose of magical realism to what is essentially a love story. One of my Mar del Plata Film Festival favorites, available to buy or rent on Prime Video.

Though this is a largely unscripted film entirely in Japanese about an agency that rents out family members for lonely people, it’s nowhere near the strangest thing that its director Werner Herzog has ever done. I watched this at last year’s Mar del Plata Film Festival and was struck by the ease of its rhythms, and the placid feeling of it all. It’s streaming on MUBI.