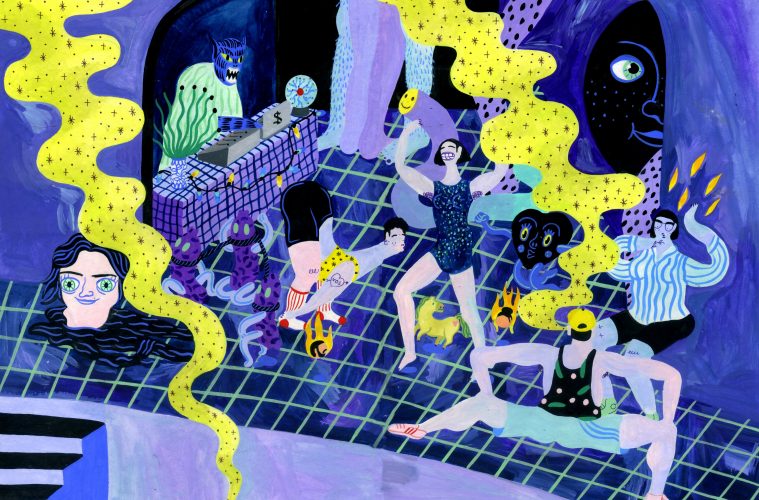 Welcome back to our monthly celebration of independent Argentine comics. Luckily, there’s been a constant stream of new releases despite the quarantine, and we have fresh material to digest and review. In observance of the full moon, we’ll dig into two new releases from the publishing house Maten al Mensajero, both of which feature the moon itself as a character, delving into inner journeys in their own unique ways.

Three friends hanging out on a balcony, under the asphyxiating heat of the Rosario summer, the night sky adorned with fireworks. This is the opening scene of Cotillón, and the starting point of an adventure that is expertly told by author Jazmin Varela without the use of dialogue. It is her third book for the label, following her autobiographical coming-of-age story Guerra de Soda and her how-to guide to female solidarity Tengo Unas Flores Con Tu Nombre. Varela embarks on an odyssey through states of intoxication, diving into the pleasures of a night as bizarre as it is magical.

Varela’s unique style, already on full display on her earlier work, take full flight. She really outdoes herself in the depiction of sequences that convey a wordless story, exploring the emotions and experiential contours of a night of partying with friends (hey, remember what that was like?). In this book, the author shows off her illustration skills in full force, as well as deploying a color palette that perfectly evokes the nocturnal setting of the story; she plays with the depiction of faces, sometimes abstract and featureless, other times displaying very intense expressions, and sometimes distorting to the point where they resemble a Saturday-morning cartoon. She is in a constant search for poetic ways to convey the wide array of emotions that can occur through the course of a drug-addled New Year’s Eve celebration.

Not everything is filtered solely through the realm of chemistry. There’s an aura of magic, combined with a bond of friendship through highs and lows, that serve as the push towards this dionysian adventure. It’ll grant characters the ability to fly, to commune with beings from other worlds, or find the devil’s hideaway and dance their asses off. As the pages progress and the pills metabolize into the protagonists’ bodies, spaces start becoming distorted, figures become ever more blurred between sweat and night lights, and we find ourselves at a point where we’re not really sure what’s real and what’s imagined anymore.

Despite the unrelenting strangeness of the scenes we’re shown, the feelings conveyed are all too familiar in the end: flashes of joy when you hear a favorite song, inordinately long lines to the restroom, hookups with strangers, zoning out against a wall as you watch everybody else dance. Postcards that will resonate with any erstwhile nighthawk.

Every party must reach its end, so under the watchful eye of the full moon, our urban heroes will know when it’s time to float towards the streets of Rosario to tour the historic spots and let the Paraná river wash over them like a new-year rebirth. Cotillón is a journey, in every sense of the word, that unabashedly explores altered states of being, as well as the simple joys of letting loose on the dance floor. Spending good times with good company in the best type of revolution; one where you can dance the night away and be whoever you want to be.

Just like there’s a full moon that accompanies night owls, there’s also a quieter one that serves as a source of inspiration or a reflection of our inner selves. Such is the case of the full moon that appears in Vasto Mundo by Flora Marquez. In the world created by the Cordoba-born author (one half of the duo behind the beautiful anthology Las Fieras), the moon stalks every being on planet Earth, locked in a constant state of dialogue with herself as well as with the reader. Forced to orbit around us, we’ve become her source of entertainment, and she finds every tiny detail she observes to be a fascinating phenomenon.

For the moon (who appears to act as a proxy for the author), nothing is too small or too insignificant to give it its due attention. There’s an emphasis on the act of focusing in on small details; I zoom very quickly from macro to micro, she tells us. Just like Carl Sagan reminded us that our existence as Earthly beings was proportionately small enough to fit into the last second of the last hour of the last day of the universe’s calendar, the moon invites us to think about the relative value of our existence, giving equal importance to the insecurities of a boy with two faces, the oral anguish of an ant, or the philosophical advice imparted by unicellular organisms that reside in a puddle of dog drool.

At the end of the day, we are condemned by our status as humans. Sometimes we simply can’t take the vastness, and we make mountains out of molehills. And there’s the moon, always watching (though we think she may be hiding during the day), documenting the fears, frustrations, and personal growth of all the beings that flash before its visage, offering up sharp quips as she watches. Through her gaze, we can better understand the maladies within us as well as to appreciate the things that accompany us when we feel lonesome.

All these lunar stories hinge on Marquez’s illustrations, which manage to create a universe that brings the trivial and the profound together, with a style of drawing that brings every plant, animal, human, object or in-between to equal focus. Each character that the moon presents to us has a name and a distinctive feature, which results in a cast of characters that is as diverse as it is, in a way, homogenous. There’s a degree of intimacy that the moon has with all the characters in the story, which allows us to see a little bit of ourselves in each one.

It is hard to resist the moon’s charms, to not fall in love with all the details she finds in the vastness of our world. It helps us appreciate the things we long ago started taking for granted. But this isn’t empty optimism. After all, the moon always had a tinge of melancholy. This isn’t an Amelie type story, where randomness and serendipity always work in our favor; Vasto Mundo has space for uneasiness, for nightmares, for grand questions without easy answers. There’s no beginning or end to this story. It’s all about seeing the world through gigantic eyes for a little while.

With that, I leave you until the next Ltd. Edition, hoping you can stick your head out of your window and find the full moon outside. I hope it reminds you of good times with old friends, or simply serves as a mirror to contemplate all the strange feelings that arise from a strange year spent indoors. Stay safe and take care.