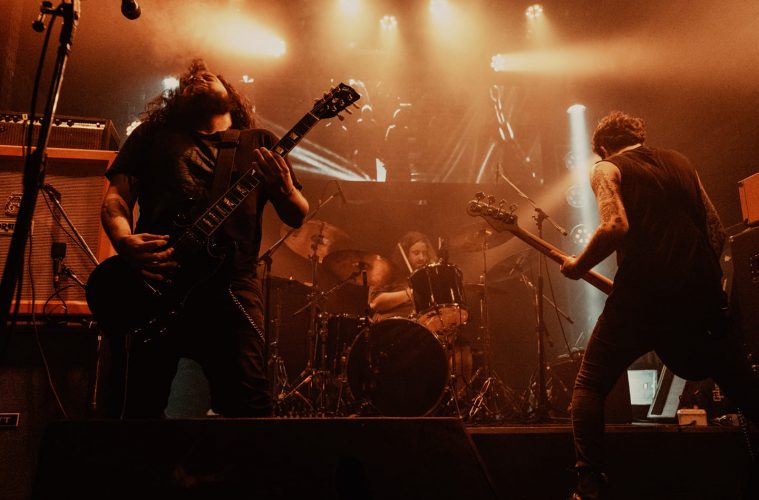 Believe it or not, the Buenos Aires stoner/sludge scene is incredibly vibrant, with an ever growing number of bands and venues dedicated to the slow, heavy, sometimes psychedelic noisescapes. I was completely unaware of this until 2013. Even more, I was completely unaware that these genres were a thing. It all started when I was at a classic sunday asado, with tickets in my pocket for an Offspring show that was happening that same afternoon. Suddenly, a friend took control of the iPod that was in charge of the music, and started playing a song that I just couldn’t place in any genre I knew. When I asked him about it, he simply said “It’s stoner. We are going to a festival today”. Without a second thought, I gave away the Offspring ticket to my best friend, and got in a car to go see this 8-band festival.

From the moment I walked into the venue, I knew I had found the sound that I had been looking for my whole life. And this is a vibrant scene that does not seem to get a lot of attention in terms of press, so we decided to share a few of our favorite bands from it. Whether you are looking for instant rocking classics, headbanging anthems or chill tunes, we’ve got you covered. Check out our selections below.

Since the release of their latest album The Endless Hours, Luciferica have been garnering praise all over. While this is their third studio record, some people consider it their first, since they experienced a gigantic leap from their previous style. Hitting all the right notes, they surf the lines that separate doom, sludge and pure rock to make a very unique blend. All their songs sound incredibly modern and tight, but at the same time no one would argue if you told them you found it in an obscure 70s LP.

Along with this, they developed a very particular visual identity to go hand in hand with their sound, which is present in their shows; their live visual performances create a dark, psychedelic experience. Their unique sound is achieved by mixing Ignacio De Tommaso’s expertise in building ear shattering bass rigs, Juan Reptante’s guitar finesse and vocals, and Ambassador’s Lucas Calabrese’s sheer versatility in the drum kit.

It may be hard to link the concepts of José Larralde (one of Argentina’s folklore icons) with Black Sabbath, Deep Purple and Lovecraft. Sauron is the unlikely place where they all meet. Active since 1997, it was formed by José Larralde’s nephews, who chose distortion and catchy riffs instead of following their uncle’s footsteps. A classic in every festival, Sauron is your go to place if you are looking to reminisce of that 70’s sound with a modern twist, ranging from the slowest, gloom inducing songs to groovy rock that just makes you wanna dance and chant along.

Pato Larralde’s vocals are accompanied by his theatrical gestures (and sometimes even straight-up acting), with the insanely intricate riffs and solos coming from JB Larralde’s Stratocaster. This dream team is completed with Hernán Ziccarelli’s hard hitting bass and Claudio Fazio’s out-of-this-world drum grooves.

Full of throwbacks and grooves that instantly make you think of the likes of Steppenwolf, Blue Cheer and Cream, Ambassador present a hard to define (but mesmerizing) mix of sounds. They have been delivering hit after hit since 2014, they are a must for anyone looking for a “friendlier” alternative but without compromising their heavy sound. Relying on vintage amp saturation rather than full on distortion, they present a sonic trip worthy of your attention, not to mention the warmth and celebratory environment of their live shows.

Their latest record, Ambassador 2, was edited in LP format and is a must have for anyone who likes this kind of sound, and is looking for a modern alternative, or the kind of person who is convinced that “rock is dead”. Maxi Álvarez on guitar and vocals, Emiliano (last name unknown) leads the bass lines and Lucas Calabrese is the one responsible for the astounding drums.

The name Sergio Chotsourian has become an immediate marker of quality in the world of stoner rock. The former Los Natas frontman joined forces with Los Redondo’s Tito Fargo to form this wall of sound. Probably the band most aligned with stoner classics such as Kyuss or QOTSA in this list, Ararat’s highly acclaimed album Cabalgata Hacia la Luz is a modern classic for everyone who is invested in Argentina’s “stoner scene”. They define their sound as a mixture of folklore, heavy rock, psychedelia and experimental trance, and I don’t think anyone who has seen them live can argue with that. As of today, the band is working as a duo, with Sergio delivering entrancing basslines and vocals and Alfredo Felitte bangign away at the drums.

We included this song as part of our Monthly Music Roundup for the month of June 2020, and the different moods this piece traverses — from oppressive claustrophobia to joyous elation — feel appropriate for the moment we’re living as a society. This instrumental rock band blends elements of sludge, stoner, math rock, post-rock and psychedelia to create unique sonic experiences — go check them out, they are well worth your time.