Nostalgia cravings hit me hard during this third trimester of the lockdown, and in a much different way from my last column. Rather than craving my go-to Buenos Aires restaurants, I’ve been wanting to eat food from back home because I was meant to be there right now. So until next summer, I guess there is always delivery. Here is a small round-up of places that gave me my gringo fill. Remember: It is important to be conscientious of how we support restaurants. Before making your order, please think carefully about supporting restaurants directly and not tossing your money at third-party foreign apps that don’t care about us, our economy, their freelance employees or the businesses they serve.

A message from my friend and colleague Max Carnage likely started this series of cravings. He is the cook responsible for the grilled cheese sandwich at Strange Brewing, a staunch defender of lowbrow barrio meals and maybe the greatest barbecuer this side of the equator. Carnage toured Texas to learn the best of regional barbecue, fine tuned his skills at both El Tejano and Logia and has traveled the world teaching smoking techniques.

Earlier this summer, he teamed up with Leno of Burger Facts for a Texan barbecue with all the fixings, and the duo continue to run the pop-up in plena pandemia. Carnage has put together a sampler plate delivered in vacuum-sealed bags that include pulled pork, spare ribs, baby back ribs, BBQ sauce, pickles, coleslaw, mash and gravy and mac n’ cheese—plenty of food for two to split over two or three meals. Although Carnage sent me a meal to celebrate the 4th of July, the smell of smoke and a crackling fire perfumed the house and reminded me of the backyard barbecues that happened all summer in the cow town I grew up in. Favorites were difficult to come by: spare ribs were intensely smoky and melted off the bones while pulled pork smothered in barbecue sauce stuffed into freshly-baked potato buns offered a delightful acidic spice on the Argentine preference for sweet BBQ.

A simple cheese pizza at Jaimito’s

This may be a stretch for the gringo food front, but a simple cheese pizza with bubbly crust and rich tomato sauce transports me immediately to Friday nights at my family’s dinner table. Jaimito, a divey pizza joint stuck in the 1970s, always makes me feel good, and not only because I came down off of acid here once with a muzza, a cold coke and a flan mixto. 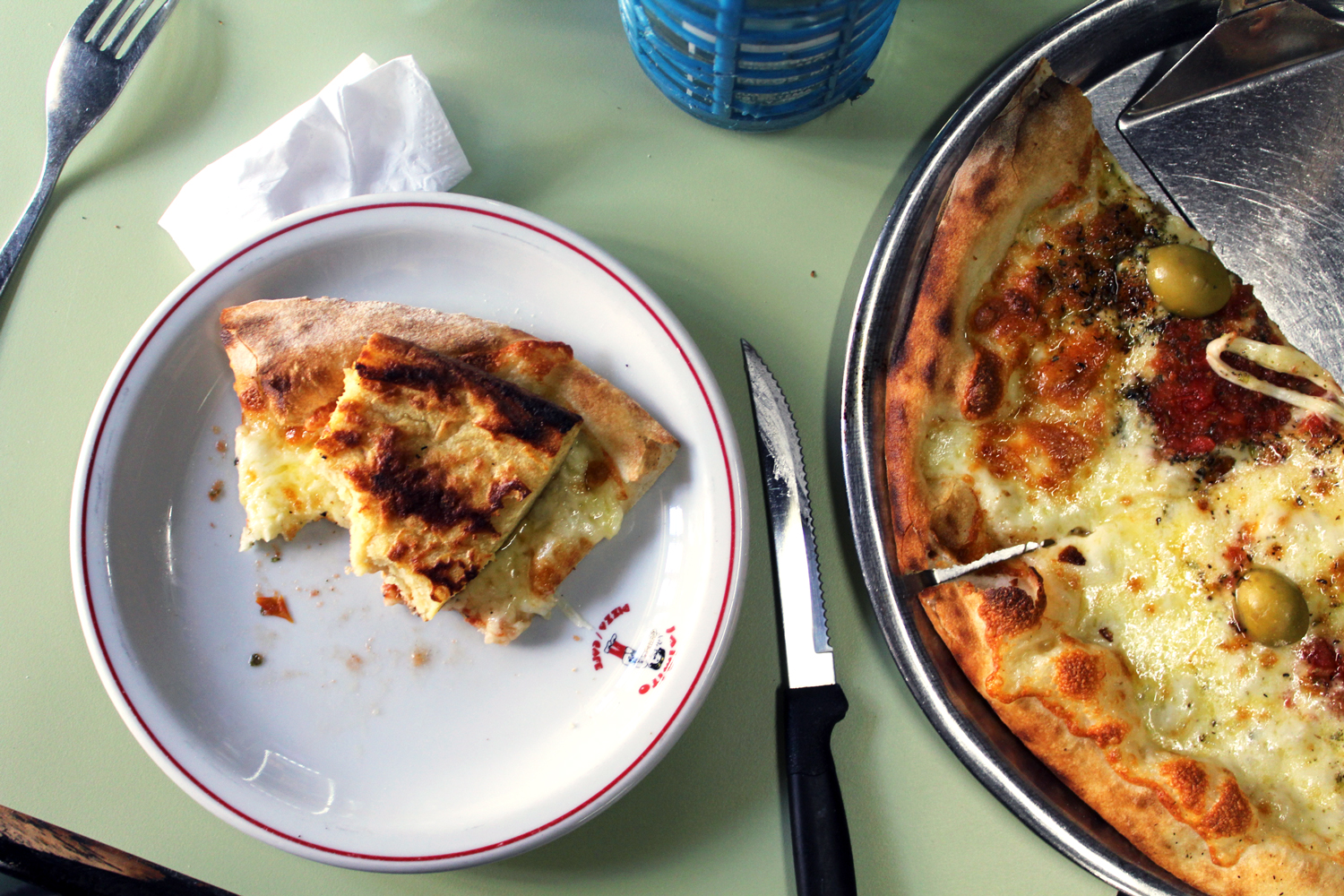 “The pizza de muzza is tossed thin and arrives to the table with a delightful perfume of molten cheese that stretches and pulls as each slice is removed from the oversized round. The edges brown and crunch under every bite. It is cooked just right so that the cheese that rests around the crust turns into auburn brown flakes like molten lava that rest atop balloons of dough. A Pollock-stroke of brick red tomato sauce is swirled around the unctuous, wonderfully chewy cheese around the center and is heightened by soft bursts of salt from the pitted green olives. It all vanishes so quickly that you are glad the pizzas come oversized, barely able to fit inside a standard pizza box.”

On Sunday mornings, my sisters and I would wake up early and distractedly watch cartoons until my dad woke up and piled us into the car to grab a pink box of donuts and hot chocolate. I would always order a Long John, a long oval shaped donut topped with an impossibly uniform line of chocolate frosting. I didn’t get hooked on the Long John because it was the most delicious — that is obviously a glazed old fashioned — but because it was the biggest one. 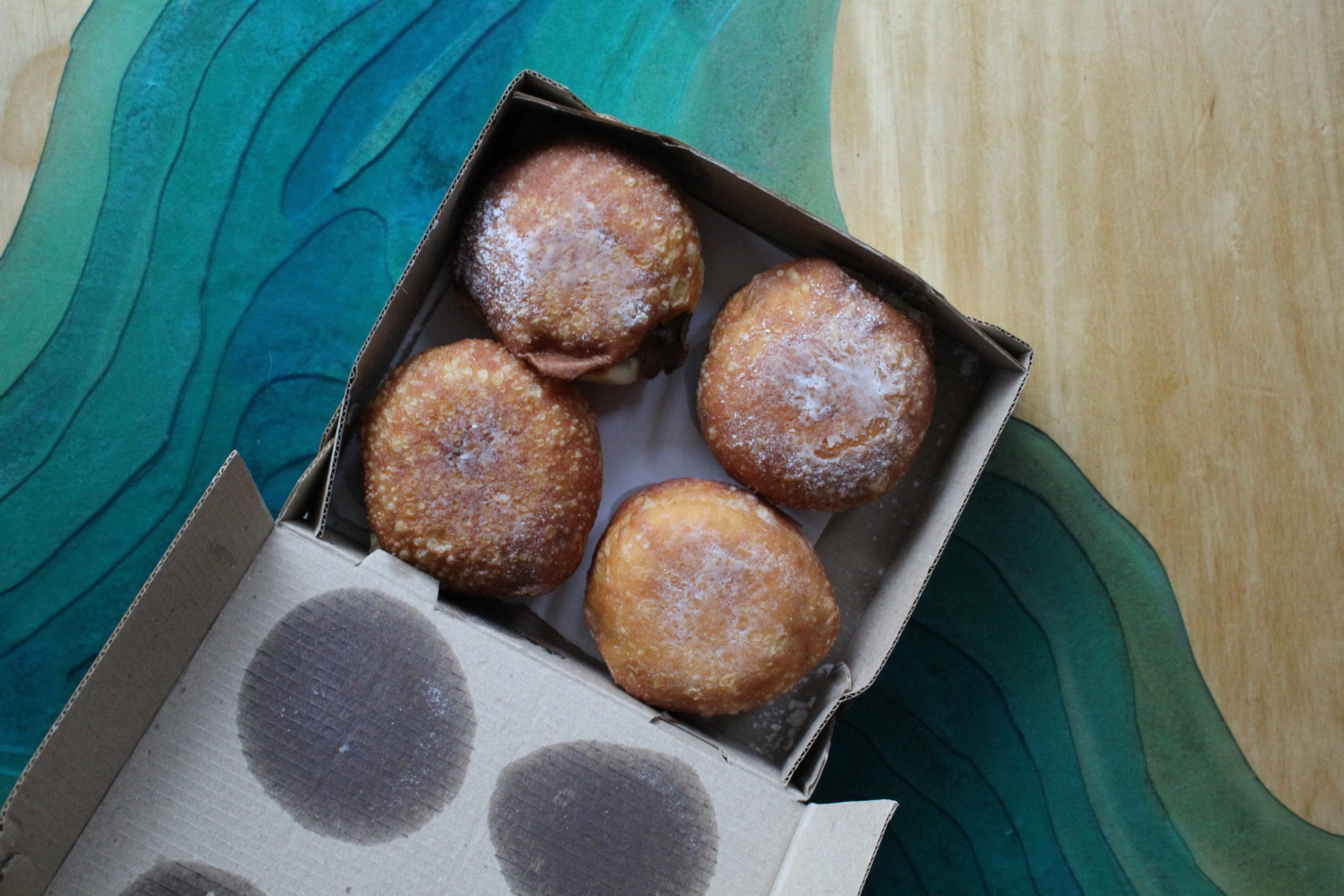 It comes as no surprise that the best donut I’ve tried in Buenos Aires comes from baker Juan Olivares of DIY bakery Centinela de la Luna. The insatiably curious developer-turned-panadero began with sourdough loaves before expanding to fluffy pizza a la piedra, hamburger buns, vegan breads, buttery croissants and rolls stuffed with cinnamon and chocolate. His first line of donuts (I am willing more) are plump spheres the size of a worn out baseball. The traditional brioche dough is only slightly sweetened with a hearty chew and a thin, flaky crust. A box of four comes with different fillings: nutella, red berry cheesecake frosting, pastelera or cinnamon cream. The nutella pairs perfectly with the savory pastry; a cheesecake frosting stuffed with fresh berries is a close second.