Make It Loud | A Brief Chat with San Isidro’s DDM

Last year, a contest in San Isidro brought a young band to the attention of wider audiences in Buenos Aires (including this writer). Making good on their contest winnings, DDM officially released their debut album titled ‘Anarkoplant,’ through the record label GAVA in February 2020.

DDM’s ‘Anarkoplant‘ was a refreshing hidden gem to come across in early 2020, with mixed stylistic influences and genre bending from track to track that quickly make their mark on the listener. The album’s dedication to capturing the ferocity of playing live is a rare accomplishment for any band: but DDM seem to have done so with undeniable swagger. As a new arrival to Argentina, I was thrilled to find the sound I had been searching for, which bounced between guttural, filthy riffs and soaring anthem vocals to provide a gateway for downright monstrous rhythms.

Having hailed ‘Anarkoplant‘ as being one of the most exciting releases of 2020 so far, I decided to sit down with the guys to talk about their beginning, creative process & future.

The band has been together since 2017. How did you all meet and what other projects were you involved in prior to DDM?

DDM: We were friends before instruments entered into our lives. The band started as a trio and we met in high school, it wasn’t until we got into our 20’s that we started to play hard and loud again. We’ve spent many hours listening to music from the 90’s. There were some projects that we previously were involved in that are no longer continuing. However we were part of previous projects such as Gruta, Gramps del Sur and,Todo lo Fuego.

How has your friendship helped you progress as a band? 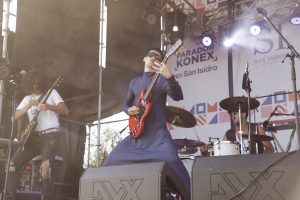 I have played in many bands in the past and sometimes found it difficult to separate work and play. How do you balance business and friendship?

DDM:There is no monetary gain in the music industry in Argentina, we just do it for the fun and the ambition of playing live n’ loud so this is never an issue for us and it doesn’t affect our friendship.

It’s been 5 years since you formed as a band. How has the time together influenced the recording of your debut album?

DDM: Our friendship is the key and engine of our music, we had a really fun time recording ‘Anarkoplant’ with Feco and this time together helped us to get exactly what we wanted.

How did winning the San Isidro Te Escucha competition change the path of your band?

DDM: Well, it made us record an album in a short time and the thing is we were quite ready to do it! We were rehearsing full time in those days so it was never going to be a difficult task.

How would you describe the music scene in San Isidro and how has that shaped your band and the sound of your music?

DDM: There are great bands in our neighborhood,  we have a lot of friends from different projects and we’ve shared a lot of music and moments in San Isidro. We would love to jam again however nowadays it’s become so complicated.

Which local artist or band has been a big influence on your music and more people should be checking them out?

What has been one of the biggest challenges you’ve had as a band?

DDM:To make each day count, enjoy every rehearsal and at the same time push ourselves to make great and powerful tunes.

How has the quarantine affected your plans for this year?

DDM: Well we were quite disappointed at the beginning…we were about to travel to Cordoba to do a video in ‘’Cerro champaqui’’(Mount Champaquí). Nowadays we enjoy the time it has given  us to compose new ideas for the future.

What is next for the band and what goals do you want to achieve in the near future?

DDM:We are planning to do some sessions of our record, maybe a live stream… we try to keep busy in the day to day, and we just hope someday we can go back to do a live-wild show in any part of the globe.

Much thanks to DDM for taking the time to speak to me. Give their latest album a spin on Spotify or follow them on Instagram: @ddm__