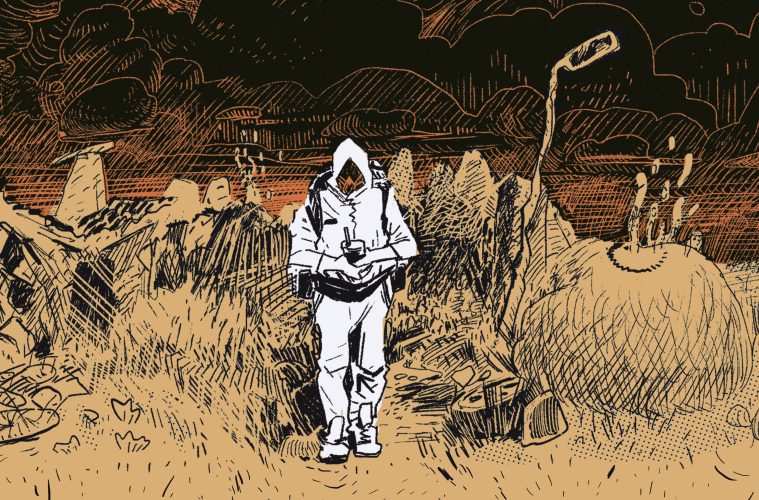 LTD. EDITION | Independent Argentine Comics in the Age of Quarantine

Welcome once more to La La Lista’s monthly independent Argentine comic book and illustrators round-up. We’re on month three of the quarantine that is keeping us indoors (at least those of us who are privileged enough to be able to work from home) in a growing state of unrest, as well as the unceasing avalanche of bad news that greets us from our screens. In this installment, we’re going to deal with these issues the best way we know how: sharing in the joy of reviewing one of the first new printed releases from this complicated year, and reflecting on our present through the quarantine diaries of local authors.

In the world we inhabited prior to COVID-19, Mano Oculta would have been considered a dystopian science fiction comic book exploring one character’s hunt for survival in a desolate world. Our current context, however, has effectively rendered reality stranger than fiction, and so this comic book illustrated by Athos Pastore and written by Rodrigo Canessa back in late 2019 (when this pandemic was merely a far-away rumor) is effectively re-contextualized, serving as a poetic meditation on the relative meaning of freedom, as well as being isolated in a hostile environment.

Taking place ten years after a nuclear accident (which we don’t know a lot about) caused the death of millions as well as a radioactive cloud, Mano Oculta follows the steps of Etiel, a lonely messenger who makes a living by finding and transporting objects from the “exclusion zone,” the cordoned-off area that is contaminated by radiation, back to the safe zone. The story is kicked off by a new assignment he cannot refuse, introducing the reader to the story around the radiation as well as the political intrigue that accompanies it.

Rodrigo Canessa’s script works efficiently, with just a few lines of dialogue revealing a lot about the world our protagonist inhabits; and though there are a lot of events that serve as the meat of the story, the attention is never pulled away from the fact that the blame for this cataclysm lies in the hands of our institutions. Etiel, the errand boy, is both free to roam this forbidden zone and also beset by the wills of others, forced to choose between his own personal freedom and the larger good. Does this sound familiar?

Illustrator Athos Pastore (who does double duty as the illustrator and editor of the piece, which is published by Deriva Editora whom we’ve already discussed during this quarantine) renders a richy toxic, oppressive atmosphere which is constantly besieging our protagonist during his journey. The artwork provides an ominous tone to every setting, creating a feeling of desolation and menace that runs through the entire story, through large panels (and even entire splash pages) that feature the barren wasteland as our focal point.

This release may be bleak in its story, but at the same time it works as a sign of life for the local publishing landscape, which has been mostly inactive for obvious reasons. We hope that independent comic books continue to make their way to our hands, especially those with stories that help us reflect on the world we currently live in.

And speaking of reflecting on our current predicament, there is nothing obligating us to keep a straight face while doing it, as demonstrated by two comedic illustrators who are keeping a diary during quarantine, exploring the grittier side of these last few months and making us laugh in the process.

Ernan Ciriani is a comic strip illustrator, a founding member of the political humor collective Alegria. His style is characterized by a pen stroke that’s as wild as the irreverence of his jokes, dealing in a crude comedic style that tends to feature himself as a protagonist. The art of (self) observational humor applied to the context of this pandemic result in a sort of “quarantine log” in the form of comic strips that he’s been publishing on Instagram, reflecting all the frustrations, fears, and bouts of neurosis that we’re all going through during lockdown through slice-of-life vignettes. Eman admirably portrays the dark side of this monotonous new normal: dealing with his son (and his cat’s) demands, cursing up a storm as he reads the news, and watching the whole world sink in collective terror. Dealing with the anxiety of how this will all shake out through anger and a burning desire to set everything aflame.

Otto Saizer is another member of Alegria who has been working on illustrations that reflect his experiences and emotions through quarantine. He has an admirable expressive capacity for conveying emotion in his art, and his humor encompasses the entirety of the complex mood swings we’ve all been cycling through. From laziness, fear of death, addiction to carbs, obsession with home cooking, and binging on entertainment. His comedic universe shows him (literally) stripped bare; it is an intimate piece of work that also portrays scenes of cohabiting with the darkest fears that find their way into his internal monologue.

We say goodbye for now, hoping that this survival kit helps you through the (recently announced) extension of the Argentine quarantine. Following artists that are able to express the anxieties of our current situation through a mix of crudeness and humor is cathartic, and much more than deserving of your likes; we are happy to be able to celebrate the survival of independent comic artists and publishers in a year where releasing physical editions is a risky proposition, especially those that inadvertently put a mirror to the collective trauma we’re experiencing. Take care, and we’ll see you next month on LTD EDITION.