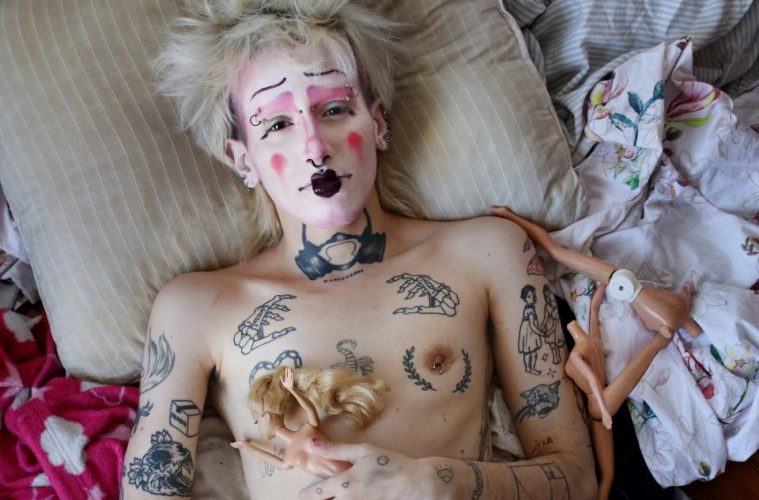 Interview | Glimpsing Beauty in the Turmoil with Kenny Lemes

Kenny Lemes is sitting six miles away from me (probably in a flat whose walls are covered in art, unlike mine which is covered in food stains) wearing a pair of ripped jeans, red chucks, and an immaculate white tee. Had I not known who we was, I’d probably have mistaken him for a (much younger) Jason Statham. I on the other hand, am wearing a Miu Miu white button-down and black boatneck. I look like Emily Ratajkowski, had it not been for the fact the only thing we have in common is our belonging to the human race. *Given the unprecedented COVID-19 situation, I had no choice but to carry out this interview online, meaning I may or may not have used some creative licenses. Meaning we are both likely in our pajama bottoms, which we’ve been in since day one of the quarantine.

I stumbled upon Kenny’s portrait photography works earlier this year (which I previously mentioned here) while dodging belly dancing centennials on my Instagram feed. His crude, unapologetic unconventional portraits were all my eyes needed to:

B) Reach out to Kenny and ask him for an interview. (Which brings us here.)

How did Venus Perversa start? Do you think your background (neighborhood/childhood/adolescence; make of it what you will) had any influence on this project?

Venus Perversa began a little over two years ago, and is the result of a long-sought attempt to reclaim and reshape fixed beauty dogmas; different perceptions of the human appearance often marginalized by society in a systematic way. Not only physical-related conceptions, but other traits like gender and love as well. I find it very important to address gender and love in my work too and to be able to deconstruct them through art.

As for my background, although I’m Cuban, I was raised in Buenos Aires. My roots have no impact whatsoever on this search. My background has been present in previous works, but not this one.

What sparked your interest in photography?

I never had a specific interest in photography; at least not consciously. I have, however, always been intrigued by images and how humans are able to connect/relate to them. For me, it’s all about pictures and words. When I was a kid I thought I’d grow up to become a writer. As a matter of fact, I believe I’m a photographer because of my failed attempts at writing! (Kenny laughs– we’re all Kenny at this point- aren’t we?). I believe photography and literature are doors that enable us to access new worlds, allowing us to expand our knowledge and experience within reality and make new alternate universes appear. When the image is new, the world is new.

What other things (besides photography) inspire you daily?

My biggest inspiration is nature. And I don’t mean an idealized nature, but more of a place of death and permanent chaos (which reminds me of Werner Herzog‘s jungle description in Burden Dreams). The truth is what keeps me alive to date is the constant exercise of forcing myself to see the little glimpses of beauty in a world of turmoil; to consciously distinguish and appreciate them; soak them in and apply them to my work of art.

Do you have any ritual(s) when it comes to your work?

None. I’m a very anxious person! Sometimes I go to meetings and shoots with plenty of ideas, but they’re all over the place. I never learned how to get organized. Mentally organized. Everything inside me is a complete mess.

How do you know when a work of art is done?

You just know. There are times when you find that one photo right away. Most of the time it takes two dozen “bad” shots though.

What’s your favorite thing about being an artist?

I mentioned something before about building a new world, a new reality through images. That’s what I find most pleasant. When a person contemplates your work and you, as an artist, notice how their head opens up in a thousand ways. That’s what makes it for me.


Of all your works to date, which one is your favorite and why?

There’s a photograph called Un bloque de cemento, una madera azul y un pájaro muerto, which received an Honorable Mention Award by the Fondo Nacional de Bellas Artes back in 2016. I wouldn’t say it’s my all-time favorite because I’m a highly indecisive person, but it means a lot to me.

As an artist, what role do you consider you have in society?

I don’t feel like I have any authority to give a “verdict” on that. To do so, I’d have to establish what is art and what is not, and according to who. In short, I have no idea what role I have in society. I don’t even know what role I have as a human being, much less as an artist!

Art enables me to find myself, understanding that everything in this world can be modified, everything can be used for transformation. Even the small things– the everyday life details. You see, for a long time I worked with garbage, collecting things people got rid of, and applied them to my sculptures. You can basically build anything from anything. I do art for for my own mental health and because I need the freedom to give myself some sort of poetic license that separates me from the rules and literalness of reality. Magic, fantastic literature, magical realism: that’s what happiness is about.

Last but not least: current guilty pleasure on Spotify?

I don’t listen to much music these days to be honest! I do however enjoy some good cinema. Super quick recommendations: Portrait of a Lady on Fire and Emma. Oh, I’ve got a third one! If you haven’t seen it yet, do yourself a favor and don’t miss out on Blade Runner 2049. Just don’t.