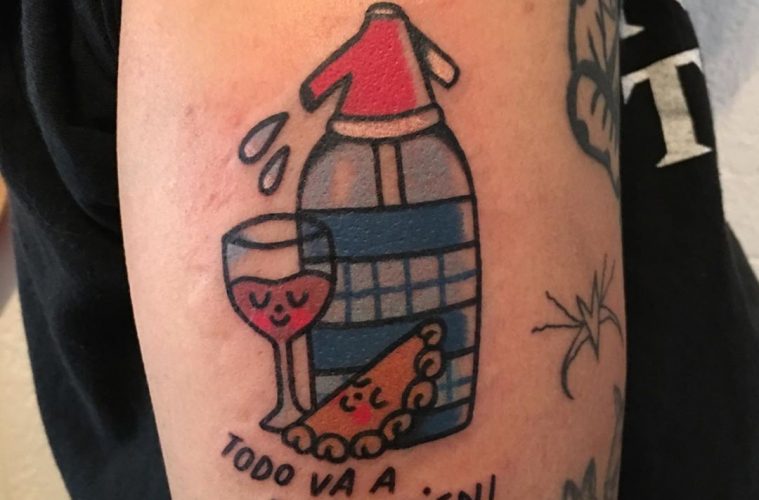 Welcome to part two of our feature profiling female and non-binary tattoo artists! If you haven’t read part 1 yet, click here. We talked to eight amazing artists and presented their stories here, in their own words. We also asked what they’re doing to deal with the current quarantine. Check out their work, follow their social media, and support their amazing work!

Podri has been tattooing for five years, but she’s drawn all her life. She initially worked in graphic design, even working with an animation house. Interestingly, there was very little drawing involved at that particular job, and drawing was one of her favorite things to do. One day, the man who normally tattooed her saw her drawings and asked her to consider getting into tattooing. The rest is history.

When she started tattooing people, there were very few women or other minorities involved in tattoos. Pilar Blanco was one of the few women she knew in the field. At the time, the environment around tattoos was extremely intimidating and toxic if you were a woman. Thankfully, Podri never had to deal with particularly ugly situations and had the fortune of dealing with good people. Even then, there was some prejudice around being a woman involved in a male-dominated field. When customers entered the tattoo shop, they would assume she was a secretary and not another tattoo artist. There were also several men who refused to get tattooed by her because she was a woman. This environment is slowly changing; there are more women and dissidences involved in tattooing. Podri herself chooses not to get tattooed by cis men, since it is an extremely intimate situation and she’d rather not have to deal with sexist comments from the guy who is putting ink to skin. Getting tattooed by other women provides a sense of mutual protection.

During this quarantine, Podri is offering original digital illustrations, as well as her oil paintings, both in stock and made to order. As far as tattoos, you can contact her to schedule a post-pandemic appointment.

The first time Nem saw a tattoo on television, it blew their mind. But they lived in a very traditional rural environment, and it was such a taboo topic that it seemed unapproachable. Upon leaving this environment, they met people who intended to help them get initiated in the art, but it was only after moving to Buenos Aires that they found the space and inspiration to become truly involved. What most appealed to them was an almost “auteur” approach to tattoo, diverging from the more traditional styles. They became involved with other artists who encouraged them to involve tattoo in their search for artistic identity.

As with many aspects of our lives, there are a lot of practices that haven’t been properly reconsidered in light of the fights we’re leading in transfeminism. The most basic come from the lack of education with respect to identity, gender, and sexuality, in order to fully understand how to relate to each other, both those who make and those who consume the tattoo counter-culture. All the spaces and practices that don’t line up to heteronormative and patriarchal standards are disputes, so they must build their own rules. This is where the independent feminist, transfeminist and dissident spaces appear; they perceive themselves within a context that deals with that label, and thus they start to build their own logic, their own networks, and their own strengths in order to help, support, teach and even protect each other. The common spaces that don’t represent us are slowly being denounced and abandoned. What makes the difference is the awareness that these other spaces have of their bodies, and what we must demand from spaces in which we work and places that we patronize.

During the quarantine, Nem is working on their space and on other work tools. They are not scheduling clients, but they are designing some large pieces in advance. Studying new methods of self-management. Taking shelter in, and in turn sheltering, their environment. They think that what comes next will probably require a more cooperative approach, one with a more conscious consumption.

Since they work at home, they try to maintain a space where several people from the LGBTQ+ community can meet up in order to support each other, help each other in their projects and constantly learn from each other. Thankfully, they know every person that they tattoo and bumps into them in other places within the community.

Mailen started to fantasize about tattooing when, as a child, she was told she couldn’t get one. This is how she started drawing and designing what she would eventually carry on her skin. At some point, she was so into the notion of designing her own future tattoos that she decided that she didn’t just want to draw them, she actually wanted to make them a reality. Her brother Gonzalo, an illustrator and muralist, became involved in tattoos; she hitched on to that wave as well. They bought the equipment, and she made her first tattoo at the studio where he worked.

Starting as a kid (not to mention a woman) didn’t make things easy. The climate around tattoo art laid bare all the privileges that cis males enjoy. She had to endure her work being underappreciated and struggled to find someone she can trust as a mentor aside from her own brother. Thanks to the gradual changes that we’ve undergone as a society, there is much more involvement and visibility of the excellent female, trans, and non-binary artists. The work has become the main point of focus, and there’s an increased emphasis on the safety and comfort of artists and customers.

Mailen currently works at two tattoo parlors. One at Ingeniero Maschwitz, along with her brother, and the other in Villa Ballester, where she lives. Both places require prior booking. Her priority is to make the process as seamless and comfortable as possible, keeping a light and relaxed environment to ensure a pleasant experience for her customers and also for herself as a tattoo artist.

During this quarantine, she’s taking advantage of the time that has freed up, which usually runs dry during peak seasons. She’s drawing a lot and creating many designs that she will offer as tattoos and also upload to Flash Cookie. She’s also involving her other great passion: music. She’s creating a series of tattoos of microphones, synthesizers, and other instruments. She’s also using this as an opportunity to study new drawing and tattoo techniques, as well as getting to know new artists.

Poxi always admired tattoo artists, but perceived them as something out of reach. This was in large part due to being a girl. This lasted up until the moment she realized that if they can do it, then so could she. So she dove deep. She’d been drawing her entire life, and started tattooing in the least advisable way possible: with a needle and Indian ink.

At 17 years old, she purchased her first Chinese tattoo kit and tried to do it by herself, but it idn’t work; she couldn’t figure out how to put the machine together correctly. So she approached people who were already active in the field and started to ask for advice. Even though there is always a sense of reticence when it comes to sharing advice within the world of tattoo, she got the tools and the advice she needed and started to work. First, she worked on her friends, her siblings, and her boyfriend at the time. It was a pretty successful start, and soon she was charging people a small fee to tattoo friends-of-friends. Within a month, she was called upon to replace someone at a tattoo studio, and it turned out to be the only tattoo artist in the entire business. So not only did she have to learn on the spot about tattooing, but also about managing a business. A few years later, she went to a different place to work as an apprentice and tattoo artist. She didn’t do a lot of tattooing during that period; she did a lot of illustrations and a lot of cleaning.

Having been in the business now for 8 years, Poxi is filled with love and pride when she sees the amount of women and dissidences that are into tattooing and creating their own spaces, with a different environment. She feels that at some point there was a shift in the old sexist, close-minded world of tattoos, and new rules started to be put in place that favored everyone. This is a victory not just for people who didn’t fit into the category of “cis male,” but for everyone who ever felt uncomfortable in the male-dominated environment. We’ve all heard horror stories about clients who’ve dealt with disrespect or abuse in these kinds of spaces. That’s why she works at a private home studio. But since this can be a lonely practice, she also joined the crew at CASA BOTANICA TATTOO, where she works once a week.

Poxi is not scheduling appointments currently. Faced with the uncertainty of the COVID-19 pandemic and its quarantine, she’s choosing to wait for a bit. When the quarantine lifts, she’ll schedule as many clients as possible. In the meantime, she’s offering flash designs and offering customized hand-painted products.