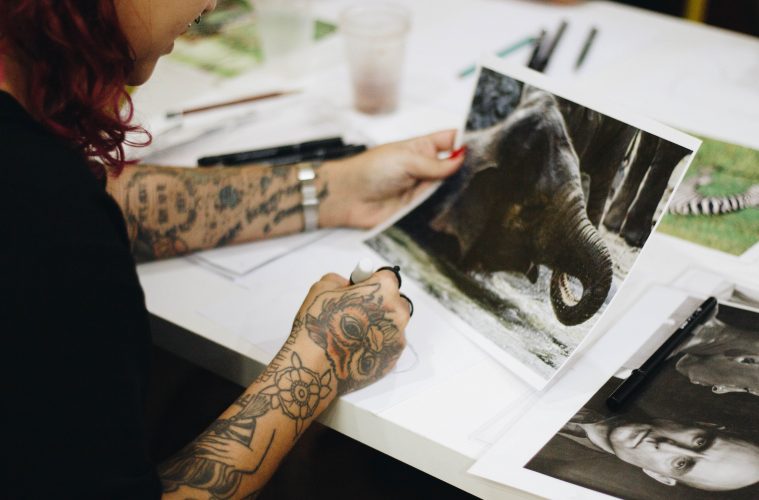 Okay. This quarantine has been going for a while, hasn’t it? I can’t wait to go back to enjoying the good things in life: going out dancing, hugging and kissing my friends, spending time outdoors, and being stabbed by needles that inject ink into the outer layers of my skin, also known as getting tattooed.

Sure, it might not be at the very top of my list of priorities, but those of us who already have tattoos are always thinking of the next one. And what better way to spend all this extra free time than discovering who could be the tattoo artist of your dreams?

As a personal choice, I haven’t been tattooed by a cis male in a while. This is due to a few different things: a bit of feminism, a bit of support for female artists, and a lot of being tired of having the world explained to me by dudes. It’s a matter of comfort, which I think is very important when it comes to submitting oneself to a process that — let’s be real — actually hurts. It’s nice to not have some guy preach to you. Beyond all these subjective issues, however, there’s also the fact that there are a lot of incredible artists popping up outside of the cis male sphere, with beautiful approaches to the artform that are worth knowing about.

So we decided to use this space to highlight a few of these female and non-binary tattoo artists that deserve our attention and support, especially during this pandemic. We asked them a few questions about their process and journey. This is the first of two installments; we’ll be sharing four more incredible artists soon.

Pola has been a tattoo artist for over 5 years. After studying the fine arts, she started working on a number of other fields before taking the leap towards tattooing, even though it’s something she’s always wanted to do. The stories about how female apprentices were treated in tattoo studios weren’t very encouraging, especially where she lived in Luján. Years passed and she finally met a tattoo artist who was willing to teach her, someone who was generous with their knowledge and their tools. She accompanied him as he tattooed his clients, and he lent her his machines and taught her sterilization techniques. She went back to illustrating like she did in her days as a student. She started off working on some friends, who then brought their friends along, and next thing she knew she had a group of clients who trusted her and would pay her to tattoo them. She quit her day job, set up a little tattoo parlor in Luján, and committed herself full-time to the artform.

Beyond her natural inclination towards Blackwork and traditional tattooing, Pola is always enthusiastic about her clients’ proposals and creates incredible designs, sharing in the magic and seeming randomness of the reasons why one chooses to pick a design and carry it forever on one’s skin.

She currently works in Capital Federal at Casa Botánica, and after the quarantine she will join the staff of Julieta Nieves’s Noguni Tattoo Studio. On her Instagram account, Pola is offering tattoos as “pandemic prices”; you can get in contact with her to start planning your next tattoo. You can put down a partial payment to “freeze” the price and get your tattoo after the quarantine. She also offers gift cards you can give virtually during these times.

Carrie started tattooing at the same time as they were getting their degree in visual arts. These two educational processes grew together and enriched each other. Their interest in the visual arts — painting and drawing — led to their interest in tattooing, feeling like an extension of what they were already doing. It was still drawing, but instead of pen on paper it was needles on skin. Given the fact that the tattoo community is crowded by cis males with sexist and patriarchal worldviews, it’s natural for female, trans, lesbian and non binary people to feel left out of the “mainstream.” And they wouldn’t feel comfortable there, given how hostile it is. This is the importance of the organization of trans-feminist events and spaces that prop up these communities.

Independence and self-management are key. They make up the first link in the chain of sharing and signal-boosting work among colleagues. Coming together to support each other and visibilize each other’s work is something that heteronormative male spaces don’t have. Outside of those constraints, there’s a sense of independent collaboration, with a rich and powerful visual identity that remains decidedly off the beaten path; individual and identifiable styles with a wider visual scope.

During this quarantine, Carrie is designing at a discount rate. They have a series of flash designs that are available online, with very accessible prices that they’ll freeze until the client can get tattooed. You can make your reservation via Instagram to book a custom design or one of the available illustrations.

“La Maga” has been tattooing for 10 years. This love first blossomed the moment she made her first tattoo; the art and independence of it won her over. She received her first tattoo kit as a gift, and her skills as an illustrator and as a tattoo artist developed together. Making artwork her “battle flag,” her and a partner opened Espacio Kadhabra which today serves almost like a co-op where only female tattoo artists work; they all share costs, decisions and responsibilities. All bodies are welcome, which is important in creating a comfortable environment where people can display their bodies to be marked for life. This is especially important considering all the public allegations of inappropriate behavior within the tattoo artist community. Diverting attention from “machirulos” means creating spaces where there used to be none, giving more attention to women and dissidences.

The quarantine caused La Maga to get a little creative. On her Instagram, you can find products that have her designs (available while supplies last): t-shirts, notebooks, patches, pins, etc. You can also contact her to start the process of selecting your future tattoo together. What she’s doing is charging for an extremely customized tattoo design service, with a lot of feedback from the person who will be tattooed. There will be several rounds of comments and changes as the design progresses, giving you the opportunity to modify and adjust the tattoo, much more than you would normally be able to. This means that the client will also receive the finalized design in high quality for any future use they might want to give it, beyond tattooing. So you can have it as a screen background, or print it out. La Maga will also request a photo of the area that will be tattooed, to better create the design to each body part’s specificities, as well as working with your other tattoos (if you have any). Her designs will soon be available on Flash Cookie, the merch-on-demand platform.

Vero started tattooing a little over three years ago. She followed the advice of other tattoo artists and watched them work, especially Nuve Voladora Tattoo, who encouraged her to keep growing. After going to art school, she realized that tattooing was one of the things she could work on every day and not feel tired or bored by. When she started to look for work, she was told to develop a portfolio of illustrations and show up with a short skirt, that way they’d hire her in any tattoo studio. This is a horrific reality that’s much more common than we think in terms of growing professionally in the medium. Luckily, she managed to meet a lot of incredible people along the way; people who guided her and helped her out without asking for anything in return.

She works with some of those people at her studio in Córdoba Capital, 𝐂𝐫𝐨𝐦𝐞 Tattoo Studio, a painting, engraving and tattoo studio that’s in a constant process of growth thanks to the love and disposition of its artists. In Capital Federal, she often tattoos in the studios of other women, as that’s the space where she’s most comfortable.

Beyond the initial concern due to not being able to work during the quarantine and everything this implies (maintaining a tattoo studio isn’t easy), she’s joined forces with fellow artists and are offering illustrations by request as well as designs for future tattoos. She also has pre-made work available at the studio while supplies last.

This is the first installment of our series highlighting female and non-binary tattoo artists. Make sure to follow all these great artists on Instagram, contact them for your tattoos, and keep an eye out for part two!