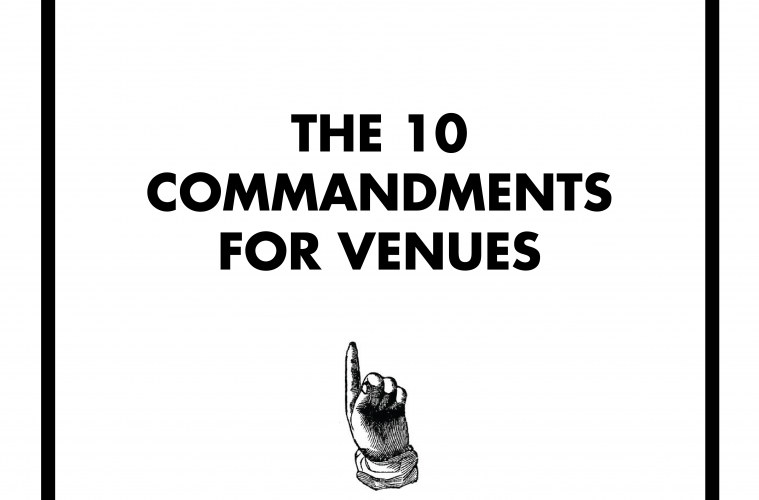 Rules to Live By | 10 Commandments for Venues

It’s a well-documented fact that we’re all avid music lovers here at La La Lista. But it’s decidedly less-known that many amongst us are also prolific artists and musicians, in either a band or solo format. And because we’ve all been through at least one nasty live-playing experience ourselves, we’ve decided to bring you a list of 10 commandments that any live music venue should follow to a tee when (if?!) the quarantine ends (Gawd, we miss live music).

PS. Venue owners and show runners – don’t think we’ve singled you out! We’ve already run one of these for artists as well as another for audiences. For all of you who run your venues in a respectful, organized manner: we salute you, and are ever so grateful for your service. *bows*

We know! This should be common sense, right? Well, lest us not forget what recently happened to Les Presentes. For those not familiar with the sordid tale, we’ll give you a TL;DR version: On the 21st of February at Guardia Duarte, one of the band members received a potentially fatal electrical shock during the soundcheck (despite multiple complaints being made previously about the outlets and cables). Not cool. Venues should keep their artists safe at ALL times.

THOU SHALT FEED THE ARTISTS

Here’s one that hits really close to home . If you’re going to host an event at your venue a 9 pm, ie. dinner time, then it’s absolutely fundamental to give your artist something to eat, whether it’s a pizza for sharing or a handful of empanadas. Can’t believe that anyone would be so stingy or cruel so as to begrudge the band some empanadas? Well, believe it. At a solo gig earlier this year, an unnamed venue wouldn’t give our dear Emilyann a single empanada because she hadn’t gathered enough people for the show (she had). Not only is it just plain wrong to deny an artist food for such an innane reason, but they also then said she couldn’t enter the venue after she had bought food across the street, because SHE HAD NO OTHER CHOICE. Incredible. To sum up, don’t be a jerk and fork over the pizza, jfc.

THOU SHALT NEVER MAKE THE ARTIST PAY TO PLAY

This is a stale trend that sadly hasn’t died off just yet. You may have heard the same, tired old speech: “Ooooh yeah, you just have to pay a few pesos but loads of people will see you play!” Or “It’s for the expenses, you know. Like a symbolic thing”. To all of these BS excuses, here at La La Lista we say NO. If you’re an artist or love artists then you’ll have no problem understanding the incredible number of hours necessary to craft songs, melodies, and arrangements. Venues are essentially hiring YOU so there’s no way you should be the one handing them money for them to capitalize on YOUR art. This also applies to venues that ask you to sell a certain amount of tickets before the show. As Admiral Ackbar would say: “IT’S A TRAP.”

THOU SHALT LET ARTISTS HAVE A DECENT SOUNDCHECK

Part of conducting a gig responsibility is making sure every act has the chance to sound as good as they possibly can. While we have witnessed this is happening less and less, there’s sadly still the occasional amateurish show organizer that only lets the band or artist perform a soundcheck 5 minutes before the show, leaving the audience scratching their heads in confusion and wondering if the show has started or not. Scheduling sound checks before audiences flock to the venues is just plain professionalism, folks.

THOU SHALT HELP TO SPREAD THE WORD ABOUT THE EVENT

This one is quite simple. If you’re the one providing a space for musicians to give their show, then it’s not JUST a responsibility of the musicians to spread the word. If nobody comes to the venue, it’s everybody’s loss. Punto.

THOU SHALT KEEP THE BACKSTAGE AREA CLEAN AND HABITABLE

Yeah, we know most people think musicians are a bunch of wild fisuras who don’t care if the couch they are sitting on is full of dried up beer and stale piss. But…gross. Hell, some backstages look like 40 plus people were brawling just a few seconds ago. So please, venue owners, make sure the place for musicians is clean and safe. Especially if the instruments will be left back there unsupervised. If you’ve seen those posts of stolen equipment, you know what we mean.

A recurring problem in most live shows is the dimwitted machirulo sound guy who patronizes female artists, thinking they’ve never seen or heard of an amplifier, cable or plug before. Our very own editor-in-chief remembers one of her first-ever shows with her band where she had to argue for 10 minutes about whether or not her pedal was at fault (spoiler alert! it was the venue’s ratty old cable). This kind of behavior is frustrating at best, and down-right disgusting at its worst. If you own a venue, make an effort to hire at least one sound gal or nonbinary person for a change, and if dudes are your only option, at least make sure they are not male chauvinistic assholes, will ya?

THOU SHALT KEEP TO THE SCHEDULE AS MUCH AS POSSIBLE

Ok, we all know that most events in Buenos Aires rarely start on time, that’s a fact. But one thing is starting at 10 pm when the event said it would start at 9 pm because you want people to buy some beers and stick some falafel down their gullets. Another thing, however, is to kick off at 11 pm because of terrible scheduling and then having the last band play fewer songs than they intended to just cause you’ve never heard of a gosh darn timetable. A little bit of delay is tolerable and even sometimes desirable in a city where people might arrive a little bit late cause of traffic or packed public transport, but don’t overdo it!

THOU SHALT EJECT ABUSIVE PEOPLE FROM THE VENUE

Going back to the topic of pestering machirulos and people who don’t understand personal space, we’ve got a commandment that EVERY venue should enforce. We get it, drinking and getting drunk is fun in moderation! But harassment, abusive/violent behavior and just being a drunken idiot certainly isn’t. If you notice that someone is acting like this at your venue then you should be the first one in line to kick their ass out of the building. This way you’ll ensure the patrons are safe and, let’s face it, your venue as well!

THOU SHALT MAINTAIN A RESPECTFUL ATMOSPHERE FOR QUIET SETS

Bands and musicians around Buenos Aires are incredibly varied and we are extremely grateful for that! However, it’s really annoying when artists that benefit from a soft and serene environment are met with dozens of yapping mouths and clinging pints. Don’t get us wrong, we love a good celebratory toast as much as the next guy or gal! But if you hear that people around the bar are desperately screaming they want an Amber Lager from across the room while a solo acoustic musician is trying to create an atmosphere for their softly plucked tune, there’s nothing wrong with telling people to shush for a minute and enjoy what the artists are trying to share. Some of us can recall the bartenders from La Playita (RIP) as the unsung heroes of many quieter sets.