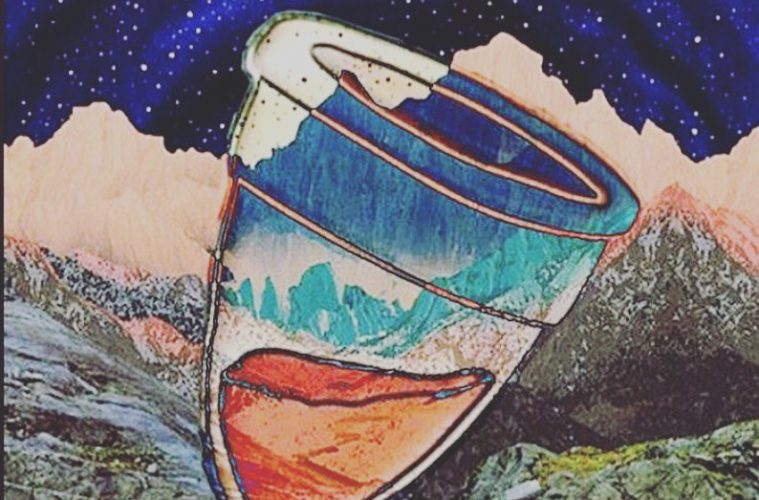 We’re stuck in quarantine for the next 10 days so it’s impossible not to think about the apocalyptic end of the world zombies, blood, death, and fear. While this isn’t an article about the zombie apocalypse, it definitely has to do with blood. This is about the misconceptions and relationships we have with bleeding. It’s about the silence around it and the poisonous products used to contain it that leave shocking aftermaths on our health and the environment. Get ready: this is about menstruation.

I got my first period at 13. I remember staring at my blood-stained panties in an almost out of body experience, while my mom repeatedly broke the news to anyone who happened to be calling that I had become a “señorita” (whatever the fuck that means). I remember this horde of thoughts about all the things I would have to put up with from that day on: pain, sanitary pads, putting tampons up my vagina (did that hurt?), the fear that people may notice, the certainty that I was done with wearing white clothes while on my period because God forbid I had “an accident” and people would see my stained pants or skirt, the paranoia that would make me go to the bathroom 10 times a day to check that everything was OK, the risk of pregnancy. With menstruation came what I now translate as very strong feelings of stress and shame.

Menstruation was, and still is, this kind of Voldemort event: it was not to be named. Something that is clearly reflected in our language choices when referring to it. We speak of “that time of the month,” in Spanish of “uno de esos días;” one would be visited by “Andres, el que viene una vez al mes” – the Argentinian version of “Aunt Flo has come to visit,” or say “me vino” (something like “I’m on it”). We never just say, “I’m menstruating.” The silence around menstruation is so deeply rooted. There was even an Argentinian 90s TV ad where a girl on her period asked her friend at the door of a cinema and in front of their dates if she had brought “the tickets,” the ticket being, obviously, the pads. One could not even say the word “sanitary pad” out loud! Not even among us women did we say it. Growing up “¿Tenés un pancho?” (pancho: an (old?) Spanish slang for sanitary pad) was commonly heard in school bathrooms back in the 90s.

The old fashioned term “indisposed” when we’re on our period, literally means that one is sick. And in ancient Greece they believed that menstrual blood was insalubrious, unhealthy, even poisonous, a misconception maintained in many parts of the world even today.

There is such a lack of education around it all. At school if you were lucky you would get one or two sex ed classes, all physiologically based with a brief explanation about women as reproductive animals. Period. The reality being, that by the time we got those classes (around 14) most of us were already way past our first period. Anything we knew about menstruation had been passed on by the women in the family and, in most cases, was limited to how to use a tampon or a pad. The whole subject was taboo, big time. 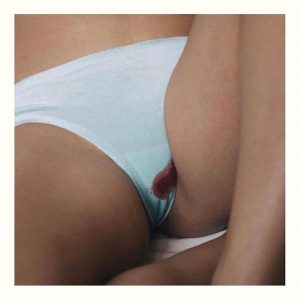 Menstruation wasn’t only silent, but also invisible: I cannot even count all the times I’ve witnessed the concealed ritual of subtly grabbing a pad or tampon from a bag, squeezing it into closed hands and rushing to the toilet to change.

So, we have: shame, sickness/dirt, silence, invisibility,  and ignorance. No wonder our relationship with our periods is one of dread and rejection.

Nowadays, though, menstruating bodies are discovering new ways of connecting with menstruation. The menstrual cup, a hypoallergenic silicone bell shaped cup that you fold and insert in your vagina that collects your menstrual blood, has been key in this shift.

This fabulous device has not only changed for many of us our perception of our own menstrual blood, but has also brought to the table many discussions of other factors such us the impact of the use of pads and tampons on our health, the environment, and women’s economy.

Seeing my menstrual blood in a cup for the very first time in 39 years was amazing. There it was, it in its purest state, a dark red fluid, the evidence that us women are the reason humanity is possible. I found myself breaching that gap of stigmatization, distancing myself from the idea that menstrual blood is unpleasant and dirty and smelly. 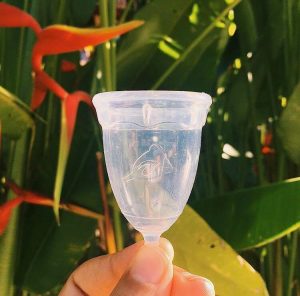 It turns out, menstrual blood does not smell. If you notice a smell, that’s actually a consequence of blocking your vagina with tampons or pads which limit airflow so that all the humidity is absorbed. Be it blood or other natural fluids, this gathered humidity can significantly alter the vaginal flora causing bacteria that creates an odor.

This alteration of one’s vaginal flora caused by extra absorbent products is the cause of many infections. The most dangerous one, being the feared toxic shock syndrome (TSS), a life-threatening complication of a bacterial infection that we know practically nothing about. Back in the 80s when super absorbent tampons were first commercialized many people died. Today, the number of deaths have dropped significantly, but still happen.

So this brings us to the following question: what are these super absorbent products made of? Materials used vary from brand to brand and most manufacturers do not specify in detail the ingredients in these products. However, they are known to include: non-organic cotton full of pesticides and herbicides, chemicals like rayon and chlorine, the petroleum derived polypropylene and polyethylene (this last one is the adhesive used to make the pad stick to your underwear), sodium polyacrylate, fiber and paper pulp. They contain plastic and are thus far from biodegradable. It would actually take between 500 to 800 years for a single tampon or sanitary napkin to decompose.

Used sanitary napkins and tampons are considered pathogenic waste. This type of waste is not recyclable and fills up landfills where all these chemicals get soaked up by the earth and pollute both groundwater and air. In some developing nations (many of which receive waste from first world countries) this waste is burnt which releases toxic fumes that can include carbon dioxide.

In the US, an average woman, transgender and non-binary person who menstruates, spends approximately 2,280 days on their period and uses more than 11,000 tampons or pads over the course of their lifetime. And it is estimated that over 20 billion sanitary pads, tampons and tampons applicators are disposed of annually.**

Manufacturing of sanitary napkins and tampons also has enormous impacts on the environment: a carbon footprint of 15 million tons of greenhouse gas emissions per year, which is equivalent to burning 35 million barrels of oil.*** 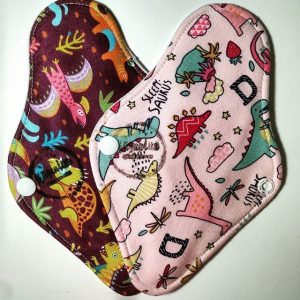 We’ve covered the amount of waste disposable pads and tampons create, now translate that into money. This is a 15 billion dollar industry we are speaking of and us women are the ones spending all that money. We are the target buyers.

Menstrual cups prices range between AR$ 1,100 and 1,300 while the average price of sanitary pads per unit in the last five years was around AR$8.63, and AR$ 10.37 for tampons. Considering someone who menstruates has around 13 cycles a year, and uses an average of 22 products per period, the estimated cost per person would be AR$ 2,468 if they use pads and AR$ 2,966 if they prefer tampons.

Many people menstruating are unpaid housewives, many are unemployed, live on the streets, are working at or below minimum wage, or are earning on average 27% less than their male counterparts. There are women in prison who depend on their usually lower-class relatives (because the rich normally pay their way out of prison) and thousands more in awful conditions. High costs and a lack of a public policy are two huge rocks that help stabilize the mountain of inequality, exclusion and debt that women experience.

We must acknowledge that more menstrual products have been added to the Precios Cuidados program and that there are collectives and politicians working to have taxes removed from these products, in addition to laws that guarantee their free distribution in schools, universities, communal areas, prisons and shelters.

While work is being done, these solutions put the environmental and health risk issues aside. A state that provides free access to sustainable products to all women would be the real dream, but I guess we will have to take it one advancement at a time. 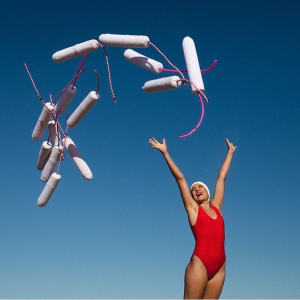 Menstruation is not a choice, but deciding what products to consume during our period can be. Being informed and privileged means we must shift to healthy and sustainable alternatives. What if we stopped contributing to the astronomical waste and stopped financing a 15 billion dollar industry? What if we started supporting local small and mid-sized enterprises (see list below) who produce sustainable menstrual products instead?

That is a choice. And is part of the feminist revolution: our menstrual revolution.

Local manufacturers of reusable and sustainable menstrual products and sites of interest:

maggacupoficial: Menstrual cup (made in Argentina)