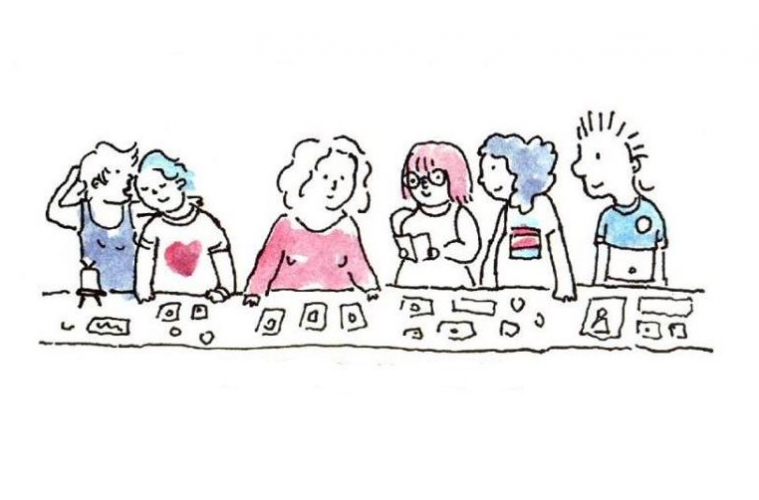 Welcome to a new installment of Ltd. Edition! This time around, instead of exploring the fashionable new topic of viruses, pandemics and contagion, we’ll focus on another timely issue. March has been designated as Women’s Month, and so we want to feature women’s’ perspective on the world of independent comics; the issues they agitate for, the events they support, and their published works. I thought this would be a great opportunity to invite four talented women from the world of independent comics to share, in their own words, their opinions on these topics.

Agostina is part of a refreshing new batch of female creators. With a background in publishing poetry, she melded her professional training with her passion for illustrated narrative and co-founded Barro Editora along with Lucas Rodriguez. This publishing house seeks to empower new voices by putting out the first published work of various creators (all of whom have been women so far).

In order to talk about women in comics today, it’s important to mention Agus Casot and the whole team behind the event ¡Vamos las Pibas!. Beyond our own personal projections and the current international scene, they played a crucial role in terms of making women and minority groups feel welcome in the industry. They welcomed us with open arms and said “here we are, you can be here too.”

In the most recent installment of the fair, there was a chat with booksellers from Punc! And Crumb, and I think it was Juana who mentioned the possibility of an approach to comics from feminism (who better than a bookseller, dealing with readers directly, to see the point of contact between cause and consequence?). It is also reflected in production: feminism makes us feel like we can tell our stories, like they have a space, like there is an audience for them. For some of us, it’s the first time we’ve ever felt that way. It empowers them. Of course, it goes without saying that this isn’t specific to our industry.

As to those who “feel” like most comic authors are women, they’re not looking at the numbers. In the year 2019, out of 130 published comics with an ISBN, only 35 of them were made by women. In 2016, when we first embarked on our own project, there were only 9 out of 158. There’s some clear progress, yes, but we’re not even close to being the “majority”. Personally, I am focused on changing these numbers, continue generating individual spaces, and improving the spaces we already share with cranky cis men. Stop feeling intimidated, and instead embrace the new life that helps our entire industry flourish and become more beautiful — ultimately, it improves this medium that we love so much.

Paula Sosa Holt is a comic book author who is also involved in children’s illustration and copy editing. She has two published comic books released by the label Maten al Mensajero (Pip & Pep, Vainilla Kids) and several collaborations in various media, always featuring a feminist perspective in her work.

For a long, long time, comic books were a space for men. Today, we find ourselves in the midst of a golden age for local, independent, feminist comics made by women, lesbians, non binary people, trans people and various other dissidences (although, as per trans activist Paula Arraigada, this is a term that can invisibilize various identities that are fighting to be named). Perhaps what we should say is that we are experiencing a golden age for comics made by everyone except cis men. Context conditions and limits themes; it’s hard to talk about trivial matters when there is a fight for fundamental rights out in the streets. And it’s harder still to speak from the point of privilege of a cis male, and why many of the young people that are dedicated to comics these days aren’t cis males, or at least the ones that obtain the most visibility. Also, the events and spaces where the work is shared and sold tend to be feminists spaces where cis men don’t belong.

Aside from the ¡Vamos las Pibas! Festival, it’s important to highlight the work of LatFem, a feminist digital medium that reports on the activist agenda. Cuadrilla Feminista, a collective from Rosario, is made up of graphic artists that line the streets with posters and publish fanzines with useful and necessary information for anyone who wishes to deconstruct themselves [reassess their socialized behaviors and perspectives]. The diary Femiñetas, spearheaded by journalist Flor Coll who lives between Rosario and Barcelona, is a combination of journalism, illustration and comics with a feminist focus, with the participation of over 150 people and having an international reach. It also serves as a guide for anyone who wishes to stay informed about the militant feminist movement. The publishing house Maten al Mensajero has been trying for many years to turn the numbers around when it comes to female authors in relation to their male counterparts.

The feminist fight expands and includes comic artists who upload their work to social media, educating people on the topic. Some of these works are published on paper, such as in the case of Jazmín Varela’s Tengo unas flores con tu nombre, published by Maten al Mensajero in 2018, where the author collects pieces of the daily lives of women, friends, and sisters who dialogue, expose and question the patriarchal system in which we are still immersed. Another talented and prolific writer is Julia Mamone, better known as Femimutancia, who has both self-published and been published by others. Their comics deal with the topics of abuse, childhood, identity, and trans issues from a very unique and personal perspective.

Agustina is a veritable road warrior of the fanzine scene. It’s hard to find an event where she isn’t promoting her fanzines, which are filled with humor. Not only is she a self-published author, but she’s one of the organizers of the ¡Vamos las Pibas! festival, which has been around since 2017 and has become the main comics fair for comics authors who are female and other marginalized identities.

I started to navigate the comics circuit about 7 years ago. From then, the only change I’ve noticed is that many authors feel encouraged to do whatever they want with their work, regardless of whether it has a central role within the scene. Validation from those in a supposed place of importance isn’t really necessary anymore. That said, there is still resistance from certain sectors of the comics world who would qualify the “boom” of female creators as nothing but a fad. The good thing is that, now, one can expand from beyond the niche. With social media, the creator-public contact is much more direct, and there’s no need for any middlemen to showcase our work.

I know it’s gauche to sing one’s own praises, but the ¡Vamos las Pibas! festival really helped to bring attention to many authors of marginalized identities and brought them closer to their readers. There were events before, but none with as much reach and success in moving audiences towards authors without any industry backing, or that of some industry figure. The magazine that is published with every installment of the festival also features authors who later pop up elsewhere, many of who, go on to have good careers.

In terms of the feminist fight, perhaps I’m mistaken, but there doesn’t seem to be a lot of work that focuses on the topic more broadly, except for when the issue is especially timely and it becomes a brief point of public attention. I think this is changing slowly, but there are very few pieces of work that escape the status quo, and the ones that do aren’t the most critical. In the future, I’d like to see the comics industry grow. I think this can happen since female authors are taking charge of their own careers by kickstarting initiatives, since publishing houses don’t give them the space or attention they deserve.

Dani Arias is a comics author and editor for the label Bocca al Lupo, which she shares with Val Reynoso and Romina Fretes. Bocca al Lupo published the anthology Pibas de Historieta Independiente, which highlighted female Argentine creators (and was featured on the very first installment of Ltd. Edition!). She’s been involved in the independent comics circuit, as well as independent comics events, for nine years.

In recent days, in conjunction with the advancement of feminism, I think the space has changed and also the way in which I inhabit it as an individual and with my project. From my perspective, and what I understand to be feminism, it’s hard for me to talk about “women’s comics” without thinking of how restrictive that sounds. I wonder if it’s necessary to apply such a broad filter to something so diverse, when we could be talking about individual factors within that spectrum. Sometimes it reminds me of those pre-colonial artifacts which are put on display in anthropology museums while the greek ones are on display in art galleries. Which criteria do we apply to the biology of the artist instead of the content of their work? And this also creates an additional problem, because talking about women can leave out a huge amount of other identities that not only accompany, but also take part in, feminism. However, they don’t appear to have a space within the scope of interest of normativism. This type of segregation weakens us.

Surely, when each of us creates comics, we think about ourselves and every experience we’ve been through, our identities. That’s what authorial work is, and this turns it into much more than a “comic made by women”. Something similar happens when it comes to taking spaces with the implicit idea that our claim to these spaces is not natural. Maybe it is time to open up our panorama and start talking from a point of view of diversity, not from restrictions imposed by the status quo. So many authors don’t get to enjoy the attention that they deserve, many of which can’t reach a broader circle due to prejudice about the content of their work. Because we talk about women’s comics as if they were a genre and an audience. There are so many marginalized authors, and the number will continue to grow, because thankfully the medium of comics belongs to all of us.

That’s all for now! My most sincere thanks to those who participated in this month’s Ltd. Edition for giving us their time and their words, and in their efforts in providing a better and more inclusive gender perspective within independent Argentine comics. We’ll say goodbye for now, with a quick reminder that there’s no better activity during a quarantine period than sitting down with a good comic book that whisks us away to far-off worlds… or that helps us rethink our own.