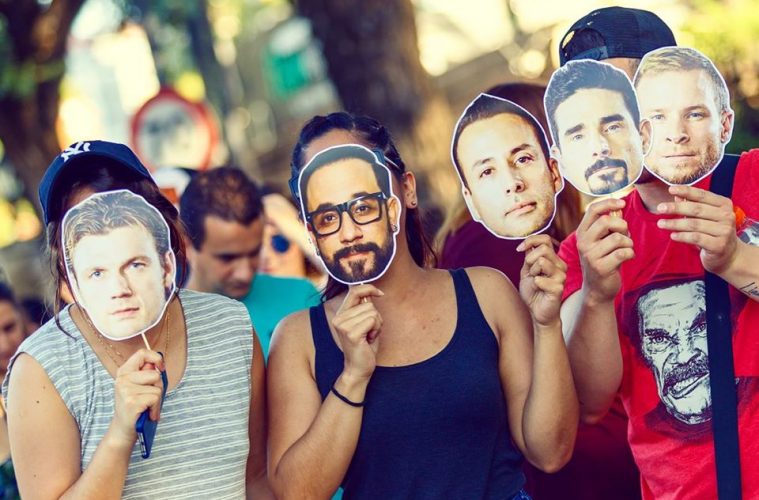 My personal history with the Backstreet Boys is long, with many highs and lows, starting with the unconditional love I had for them as a child, where they served as a shared passion with schoolmates with whom I barely had anything in common. I was always the “weird” kid, too feminine to be a tomboy but too tomboyish to hang out with the girls. Backstreet Boys trading cards and gossip magazines were the perfect excuse to spend time together, as well as translating the lyrics using our precarious grasp of English and the aid of a bilingual dictionary.

I find it fascinating to think about how we were able to manage our fandom in a pre-Internet world, where imported teen magazines were highly coveted as the most trustworthy sources of precious information. I’ll never forget a magazine article that suggested wearing a blue ribbon on our chests in order to send Brian positive vibes for his heart surgery… only to discover that the magazine had made its way to us way too late and Brian had already made a full recovery.

Later in life, there was a period of outright disdain precipitated by my transition into an “alternative” punk rock teenager. I won’t completely turn my back on this period, but how exhausting it was to always be angry at everything! And this leads us to the current version of myself, who’s long abandoned any notion of being too cool for school and allows herself to enjoy everything without prejudice or judgement (except for Keane). At the end of the day, part of growing up is knowing oneself as a many-faceted creature; a rocker, cumbia fan, a pop fan, and a goth all at once, and to embrace this wholeheartedly. Being an adult also means having your own disposable income and spending it however you please. In my case, that means tickets to see the Backstreet Boys.

It had been a full 21 years since I saw the Backstreet Boys play at Boca stadium. We were never overflowing with money during my childhood but my mom moved heaven and earth to be able to take me to the show. It was the first large concert I’d ever been to, and I’d love to tell you all about it except for the fact that I barely remember it. It was an unusually cold September for Buenos Aires (Nick Carter wouldn’t stop saying it in Spanish; “hace mucho frío!”), the stadium was teeming with screaming girls, and the Backstreet Boys killed it. That’s about the level of detail that I remember. I suppose the rest of it was replaced in my brain by more vital information, such as classic Simpsons quotes or lyrics from songs I don’t even really like.

Anyway, after holding on to my presale ticket for almost six months, the day finally arrived. There was this beautiful vibe that escalated consistently as we approached the venue. I don’t believe much in astrology or things of that nature, but I do believe in good vibes, the feeling that is generated when a large group of people get together to be happy. You could see it in everybody’s faces. The demographic was surprisingly varied: groups of kids everywhere; grown women playing the role of the young girls they used to be and allowing themselves to dance and sing wildly and loudly declare their love for their favorite Backstreet Boy even as they’re in the process of deconstructing the very concept of romantic love; girls from the Argentine interior who now live in the Buenos Aires capital and were finally able to achieve their lifelon dream; men who, as boys, probably couldn’t be open about their desire to see the Backstreet Boys because that kind of music was written off in sexist and homophobic terms, now free to openly and joyously share in this experience.

Because that’s what this whole experience was about: sharing, being there, connecting with the person next to you, hugging, dancing, singing along with total strangers with whom you have nothing in common but this. The Backstreet Boys, bringing people together once again. In a time when social and political divides are everywhere, finding a space where one can simply let one’s guard down and just enjoy oneself is a welcome change.

The show itself was wondrous. Yes, many people complained about the seating area for the VIP sector, there were some issues with accessing the fan pit, and the sound wasn’t quite up to par… but who was there for any of that? The Boys didn’t even bring a band. I guess the show’s budget was instead used for fireworks and confetti (#priorities). They had these enormous screens that allowed you to see everything regardless of how far you were from the stage; at our age, who wants to be pushing their way up to the pit?

The setlist was impeccable. Solid gold hit after solid gold hit. The big ones from the band’s commercial peak, the newer tunes, all of it. I found myself on the verge of tears so many times that I lost count. They sang their hearts out — and they really did sing, no playback! And even in the middle of elaborate choreography! I can’t even get through my gym classes without wanting to cry. They did the hat dance from the “As Long as You Love Me” music video (another emotional peak). The little side-jump from the “Larger Than Life” choreography, which nearly murdered me with excitement.

The Boys themselves were just divine. A little weathered past their teenybopper frames, but more resembling actual human people. They shouted out their families who were watching the show (the entire concert was streamed live; we’re living in the future and we don’t even realize it), deeply appreciative of the love they’ve been receiving for nearly 27 years. Making fun of themselves often, and adjusting to modern days (after all, they’re the ones who threw their own underwear out to the crowd). Sweating like madmen, because I guess nobody warned them that it’s still summer down here (and it was a particularly muggy Saturday night).

And there we all were. Us and the Backstreet Boys, sweating our hearts out. A sea of warmth, catharsis, and love. A love that’s still larger than life.