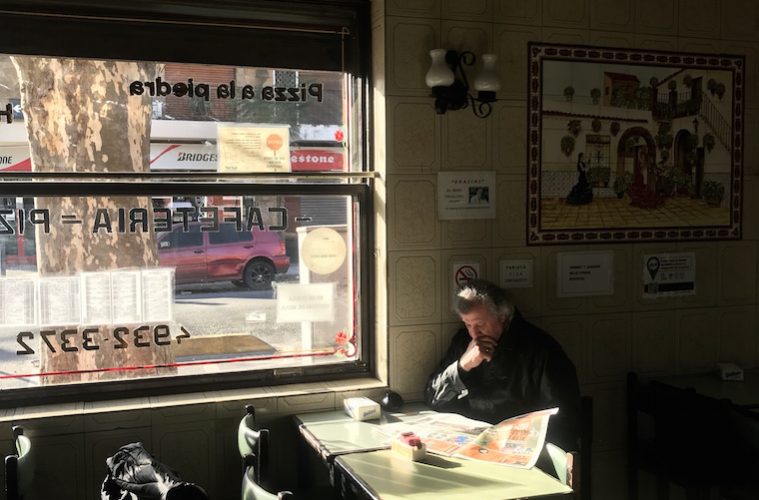 We sat at a window table sipping fresh soda water with lemon as three men at separate tables scoffed at the pre-election coverage on the small television. If you’ve been in Buenos Aires even for a few days I’d wager you’ve walked by half a dozen of these bares at least once or twice. There was probably a group of old men huddled around a table. Maybe you stopped in and ordered a coffee. It surely came with soda water and some small sort of cookie. Perhaps you stayed for lunch, a whopping milanesa the size of your head. Perhaps you walked right by, not knowing that these neighborhood spots are the Argentine equivalent of your classic diner.

These places are not about aesthetics or being trendy. You won’t find almond milk or gluten-free options. The service varies and the hours are always a bit of a toss-up, but there’s a certain charm to their old school menus and their medialuna game is almost always on point. They aren’t just cafes, nor restaurants; they are community hubs. They represent a history of Argentina and its society, a community that’s being pushed out in favor of chains that rotate their coffee promos based on seasons. Bar de Viejes is a local project working to protect these spots, to keep this type of community alive. We think what they’re doing is really important.

If you do too, join us on Sunday, March 15th at 19 hrs in Bar La Escuela (Manuela Pedraza 2803) for the first edition of BarAbierto, a concert series set in these cafes all around the city. La La Lista, the man behind Masa‘s latest pop-up, Servicio de Lunch, and Bar de Viejes are joining together to bring you live music (Paula Trama from Los Besos!), new takes on these classic menus, and a whole lot of Cinzano. We sat down with the project to hear more about occupying these spaces and to remember what community is all about.

How did you get started with the project?

The idea is pretty intuitive. The project was born a while ago out of an interest in cafes that are outside of the usual orbit in some way, an interest in the less official circuits, the ones that don’t reproduce the same forms of hegemonic consumption as everyone else. These places have a lot to do with a community that is on its way to disappearing entirely.

Like with everything, the seed of it is rooted in childhood. We’re not sure if our parents really went to that many neighborhood cafes, but it’s something that came out of the materials of our childhood; the colors, the smells, like a grandmother’s house. There’s something in these places that’s attractive. There’s something ideological that they possess that’s worth fighting for. They foster connections between people and alternative forms of consumption.

What do you mean by alternative forms of consumption?

The Instagram for Bares de Viejes comes from a place of patrimony that is both tangible and intangible. To consume is a cultural activity, so the project serves as a form of resistance against hegemonic forms of consumption. The chain that serves you a frappuccino with your name on it, for example. The mocha frappuccino may have your name on it, but it’s something that you can find here in Buenos Aires, in Paris, in New York, LA, wherever. It’s about sweeping away the personal identity with the local forms of identity that speak to history: the history of the different societies, the communities, and the people.

It’s not breaking down the relationship to its history because, that starts to be capitalism, but it does have to do with resisting this obligation to always consume the same thing no matter where you are. Like a Café Martinez here, for example. There’s some form of Café Martinez in every big city. There’s a global capitalism that asks us to consume the same thing all the time. No matter the age range, the social bracket, everyone aspires to drink a coffee from a Cafe Martinez or a Starbucks, or wherever. These old cafes offer something that’s the complete opposite of that.

Opposite in what way?

There’s sincerity, a certain austerity, the products and the things people consume in these cafes are free of any pretentiousness. In their style of decor, in their service, it just is what it is. You don’t have to attribute something particular to these places. They are places that have remained in this time and space for a long time, generally, in the same location, with the same customers who have been going there for 40 or 50 years, sitting at the same tables, talking about the same issues, ordering the same things. Going there and eating or drinking in these spaces protects them in a way from this wild era of capitalism, so that they can survive.

The Instagram account is completely anonymous. Followers have no idea if it’s a group behind the account or just one person if you’re male or female. Why is that?

If you know the history of something, you know who you are as well. It’s really important for us that the project is structured based on the idea that this is a communal account. That’s one of the reasons it’s anonymous. The account is telling a story through other people’s personal stories. It’s saying that we are all a part of the history of the society, it’s collective, and that these places form a large part of this history. It’s the history of this city, its inhabitants, the immigrants that arrived at the start of the century that fled from the war, the Spanish civilians.

There’s an importance to knowing who we are through the spaces of our city, those we choose to inhabit or not, of speaking from a collective voice, creating a collective point of view. We prefer to be the eyes of a community. To put something out there, and through that, allow others to join us, to inhabit these spaces, to share them, to get them interested in a viewpoint from another shore. We shouldn’t always be sailing through the same port.

Often we see the same places for years, to a point that we stop actually seeing them. We alienate ourselves. We’re no longer captivated by these places because they are so common. It’s something so Argentine. These cafes are so local and contain so much of our cultural identity that we look right past them. If you don’t distance yourself from it you tend to not value it. It’s not like when you’re a foreigner somewhere and you’re seeing everything for the first time.

Why the name Bar de Viejes then?

It’s not Bar de Viejos but Bar de Viejes, because the people that sustain these places, in general, are older. But the “viejes” is in inclusive language because we are trying to rethink the type of people that come to these cafes. Also, it just sounds better, right? Who is it that inhabits these spaces? We’re trying to reformulate who goes there. Why is it that women are scared to go there, or maybe feel intimidated in these places and don’t want to go? The only way these places will open to new groups of people that aren’t just heterosexual men is for these new groups to occupy these spaces, to put their bodies in these spots. There’s no other way. They just need to go. 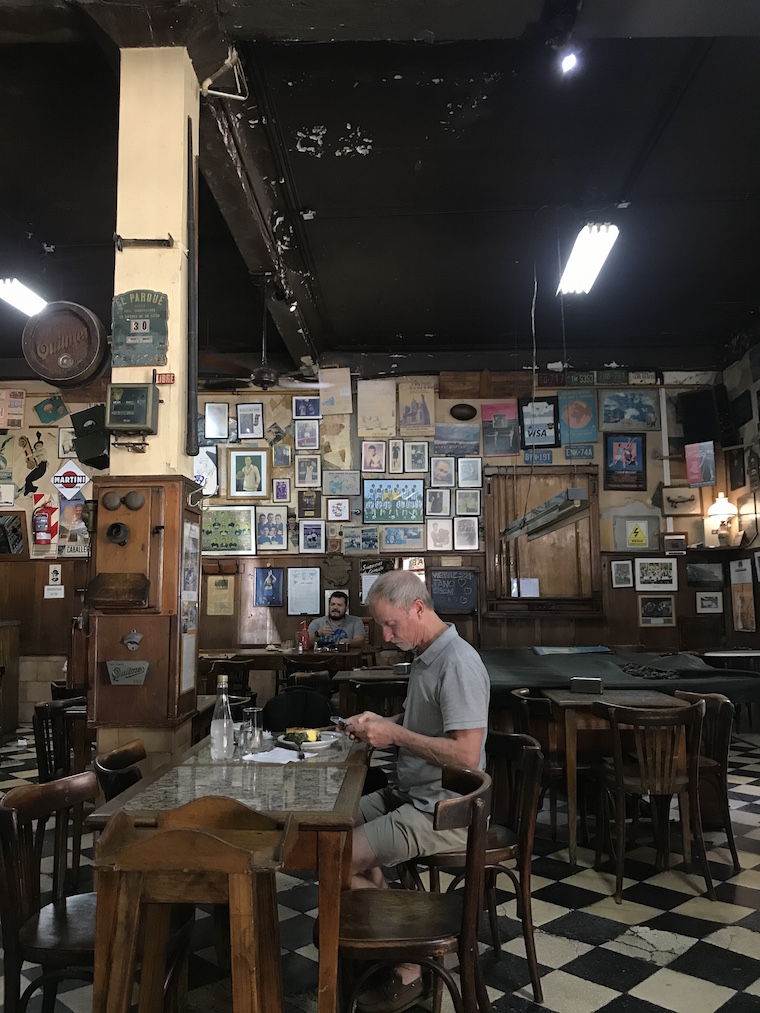 It seems like in these types of cafes the people sitting around are all a tight-knit group. Can you speak to that a little?

It’s a little dysfunctional family that forms in these cafes. Everyone knows one another. They all go to the same place, at the same time, on the same day, but they don’t have this tight bond. I mean, they probably don’t know where each other live, or what they do in their day-to-day. The way the people there know one another isn’t so intimate. There’s a relationship between indifference and routine that’s super interesting. There’s a warmth to these cafes that makes you feel like you’re in your own home. They are places that you can inhabit like homes, but at the same time… it’s not a home. Starbucks, for example, is not really inviting you to stay for hours just people-watching or reading a book. There’s a different type of rotation, another type of noise. It’s another space, another ambiance. It’s an interesting equation between the public and the private, the intimate, and what it means to share as a society. The equilibrium between these two possibilities is super interesting. Make yourself at home, but not too much.

Based on the frequency of posts on your account it seems like someone is always visiting one of these cafes.  When you go, is it a social gathering, is it something you all do alone?

There are places to go alone to reflect and contemplate. They run on a different kind of time that moves slower, which allows for a space of contemplation and observation that in today’s age doesn’t really exist anymore. We’re always with our phones, on social media, talking to someone, but there are few people that go to places alone just to sit and watch, or read, or write something. These cafes are the optimal places to exercise these types of contemplations, alone, spending time doing something that isn’t ‘productive.’ To break away from doing something deemed productive by this capitalist mantra that tells us to do, do, do, do, do. It’s a pause from this rhythm and constant connectivity because a lot of these cafes don’t even have wi-fi. It’s like a little bubble of resistance against how we spend our time. It’s all related to this idea of resisting this system that tells us we have to be producing all the time, that puts these rules to the game that aren’t collective or healthy. 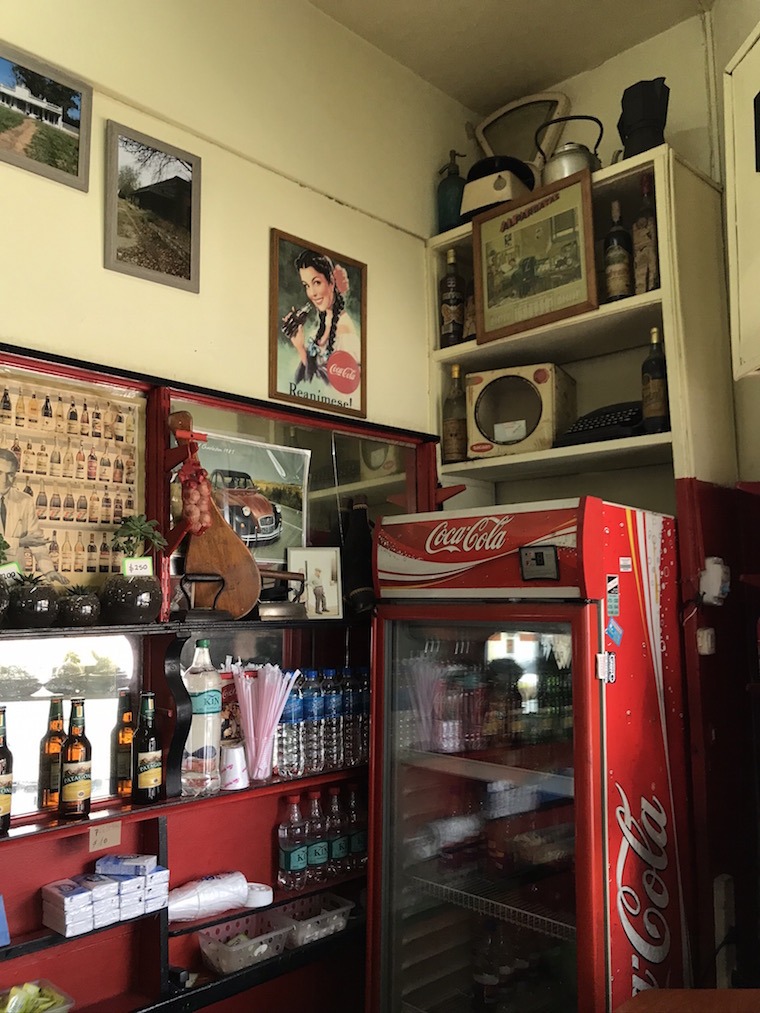 I love this idea that something as simple as drinking a coffee in a place could be a form of resistance, an act of rebellion.

There are many forms of fighting against capitalism. Sitting down and thinking is a form of resisting. Whatever you do that invites you to stop and suspend the production of wealth, and to be alone, thinking, without being connected for a little are tiny acts of resistance. You have to create those acts collectively, it’s the only way to make some sort of social change.

The project isn’t some Instagram project. Sure, it started on Instagram, because it’s a visual platform and it is how we can share and spread this information, but the objective is to collectively change our ways of consuming. We want to open people up to different outlooks. So that you leave your house and instead of heading to the nearest Café Martinez you go to your local neighborhood cafe. You protect these places from being shut down and you listen to the stories, not only of the owners but the workers, the people that go there. So many have closed and so many are closing, and the people that work there are losing a job where they’ve been for 50 years. These cafes are in a state of emergency.

Join us on March 15th at 19:00 hrs in Saavedra for BarAbierto at Bar La Escuela (Manuela Pedraza 2803) for live music, great food, Cinzano, and a whole lot of community.