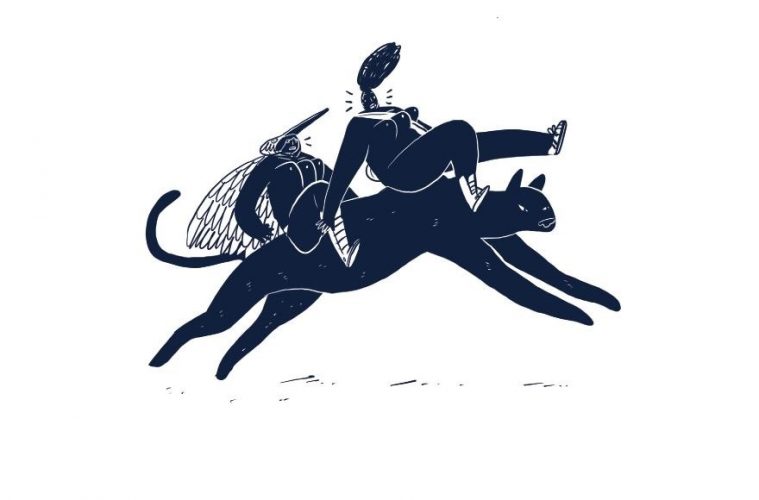 Welcome to the new installment of La La Lista’s monthly column about independent comics and illustrators in Argentina! This time around, we won’t be talking about Saint Valentine’s Day or its corporate celebration of monogamous romantic love. Instead, we’ll take a detour to talk about the support system of sisterhood and how to survive a harsh, unforgiving world in Pangea, the latest comic by Sole Otero published in collaboration by Szama Ediciones and the author’s own publishing label, La Pelusa ediciones.

This story was born, in the words of its author, as “the most nonsensical of my experiments.” What started as Otero’s aspirations of being a part of a comics anthology in Spain was later revisited as an idea during Inktober, the annual creative exercise that many creators take part in during October. It mutated with time, as it was abandoned and revisited, into its final published form.

The book follows two explorers as they go on a pilgrimage under a two-mooned night sky. Their dress is minimal, matching fur drapes with urban sneakers. They appear to move carefully and alertly. It’s clear from their body language that silence is paramount, that any word expressed out loud could attract an evil that seems to be forever just around the corner.

Pangea is a story where the setting speaks as much as (or even more than) the characters. In the comic’s constant exploration of the nature of a narrative and the stylistic resources it holds, this atmosphere — where silence and tension reign supreme — serves as a playground where Sole Otero is able to give weight to onomatopeias, and experiment with them: the constant sound of a river is present through the pages as the necessary oasis that allows the characters to finally converse; the sound of a broken branch that startles us; the unexpected “ZAP!” that reaches down from the sky to remind us that danger looms ever close.

That way, quietly and carefully, both girls walk alongside their panther companion. Throughout their journey, they go through dense foliage, as well as the ruins of long-abandoned gentrified city blocks. It’s a desolate world, populated more by the ghosts of a rusted civilization than by living beings. Broken escalators, cars gliding over forgotten streets, and the ruins of old buildings serve as the landscape over which concrete and plant green collide. This method of world-building puts another one of Sol Otero’s gifts on full display: her ability to create these dimensions within the story without delving into them deeply. In this world, which seems somewhat removed from ours, where everything seems familiar but slightly off, it’s the relationship between the two protagonists as well as the ritualistic feel of their journey that makes them feel more than human (whether they actually are more than human or not).

Starting as illustrations made with markers, which the author then transferred to a digital format in order to finish this brief story, Pangea is a gorgeous piece of work that serves as a window into a world that’s as different from ours as it is similar, with an oneiric vibe mixing future dystopia with vestiges of past civilizations. It also features looser linework and an exploration, through uncertainty, of finding an aesthetic style within the author’s own journey.