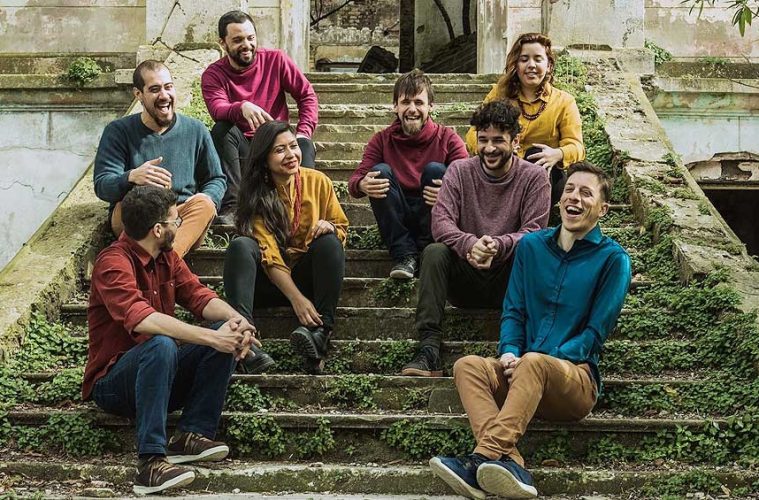 Welcome to La La Lista’s Monthly Music Roundup. As you know by now, every month we take a look at notable recent releases and share our favorites.

However, regardless of what you may have heard, we are not infallible. Yes, as much as we have our ears pressed firmly to the ground of the Argentine music scene, some stuff does slip through the cracks, and we feel like complete lunkheads when we finally do stumble onto it later.

And given that it’s a new year, we thought we’d use this opportunity to check out some killer tracks from 2019 that simply slipped by us the first time around. Rejoice, for all is good with the world now.

Click here if you want to check out the songs we did cover in the last few months. You really should, because they’re really good.

El Robot Bajo El Agua, the solo project by Jaime El Tierra’s front man, Nicolás Kramer, released a ton of stellar music last year. Not only did they release brand new album El Lado Velado (more than worth checking out), but two older albums were also released digitally for the very first time. Out of the entire brilliant heap of music, “Te Cortastes” stands out with its layered guitars and endearing love story. Kramer sings “Te cortaste el pelo, y solo yo me di cuenta,” (“you cut your hair and I was the only one that noticed”) striking a collective swoon in the minds of its listeners. While the sound is polished, there is a pronounced repeated slide of the guitar string that brings a certain rawness to the track, reminding us of the raw vulnerability of expressing romantic connection. Yes, it’s an older track, but a treasure we were happy to finally discover.

Cítrico, the alias of Argentine musician/producer Marco Otranto, has a knack for combining elements from both R&B and synthpop to create lush, sexy soundscapes that could easily be categorized as musical foreplay. “Documentales”, his latest single, veers into easy-listening territory, hitting that lounge sweet spot with cheesy drum machines, jangly lo-fi guitars, and warm analog synths. Think the smoother side of Steely Dan meets a Xanax-infused piña colada (needless to say, don’t try this at home, kids).

Signed to Yolanda Discos and having participated in some of their compilation records, Panchito Villa released his self-titled debut in the second half of 2019 with a few tunes that caught our unsuspecting ears off guard.  Opening track “Hoy Te Vi” sets the tone by transitioning from an acoustic guitar into a tender and swaying synth-and-bass groove led by a dreamy, melancholic keyboard line. Panchito Villa appears to be singing about self-sabotage as he longingly sings “Quizás yo quiero que te vayas con él” (“maybe I want you to go with him”), seeming to put his own desires aside in favor of a significant other’s. We strongly encourage you to give the whole album a good listen, especially if you’re into this new wave of dream-pop-infused singer-songwriters.

You want soaring guitar parts, crashing drums, and hoarse rockn’roll vocals? Look elsewhere. The widely-lauded nine-piece Don Olimpio specializes in other types of music. Namely off-kilter, soulful, lushly-orchestrated nu-folclore, brimming with rich melodic ideas and rhythmic trickery. “La Zafrera,” from their second album Mi Fortuna, immediately grabs you, pulling you into their musical language, and guiding you through the scenic route. More than anything, though, it just sounds so good.

Originally hailing from Formosa, Martin Fernandez Basualdo crystallized the beachy heat of his hometown into Beach Pop, his debut album, in early August of this year. While the whole album bears listening (its dancey turns and playful vocals are perfect for these scorching summer days), leading single “Las Horas” will be sure to charm many with it’s glossy production and hazy crooning. For fans of Mac de Marco, Tame Impala, and Connor Mockasin.

With two albums under their belt, the intensely powerful surf rock and post-punk Mendocinas Las Ex turned some heads in 2019. “Me Escabie,” off their latest album, is an infectious and joyfully destructive song about partying, bringing down the system, and, of course, copious amounts of alcohol. With chunky guitars, vocal Dead Kennedy-isms, and a driving drum groove that doesn’t relent for a second, Las Ex explode with a rarely matched caustic effervescence and a penchant for wreaking havoc. We’re looking forward to more from these pibas and their punky riffs.

Venezuelan composer and producer Robin Good is determined to help you get moving with this album opener off his full-length and self-produced debut Be Good. A contagiously uplifting track with soaring synth arpeggios, reverb-drenched vocals, and beat, “Nada Cambia” serves as the perfect accompaniment to a twilight bike ride across the city.

When Alilën first came on our radar two years ago, her live set included intricate riffs on an acoustic guitar, pico dulce sweet vocals, and a skillfully operated loop pedal coming together in incredibly beautiful song arrangements. Since then, she’s taken this same essence and channeled it through a new approach, new sounds and equipment, honing her production abilities and beginning to release more ambient electronic-influenced experimental tracks. “Dor4do” starts with a vocal line that melts into four minutes of soothing meditative soundscape. We are carried along by the beat, which fades in and out of the background, like floating down a warm river in a mountain paradise in a world that exists somewhere between reality and the collective unconscious.