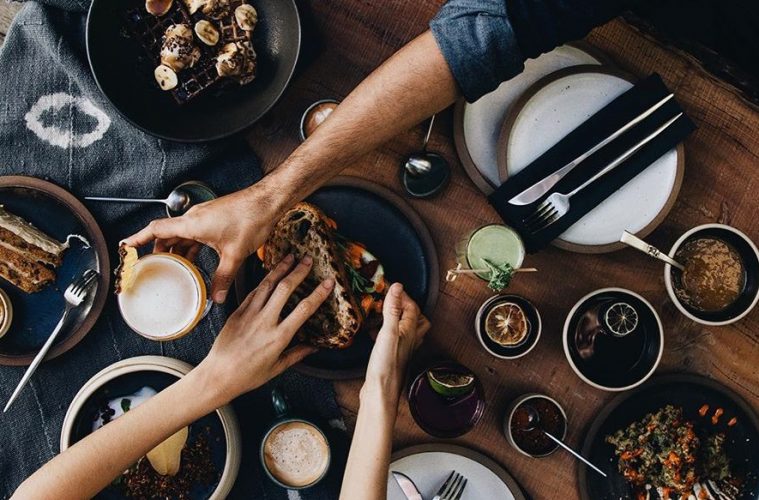 I once spent fifteen whole days turning my nose up at all things meat. I was 14 years old and more sensitive to the world around me. The food I ate very much reflected a boy that didn’t actually enjoy vegetables and a mother who didn’t know how to cook them even if I did. For two weeks, I dutifully made myself sick off a steady supply of soy hot dogs and tofu burgers.

The vegetarian scene in Buenos Aires isn’t too far off from that old reality. Lentil burgers, soy milanesas and seitan steaks dominate many a vegan’s diet despite the abundance of seasonal produce available at even the lamest of vegetable stands. Even so, it has never been easier for vegans to dine out in Buenos Aires, and Sacro, a new vegan oasis carved underneath the Casa Sur Hotel on the fringes of Palermo Hollywood, finds itself on the furthest extreme. 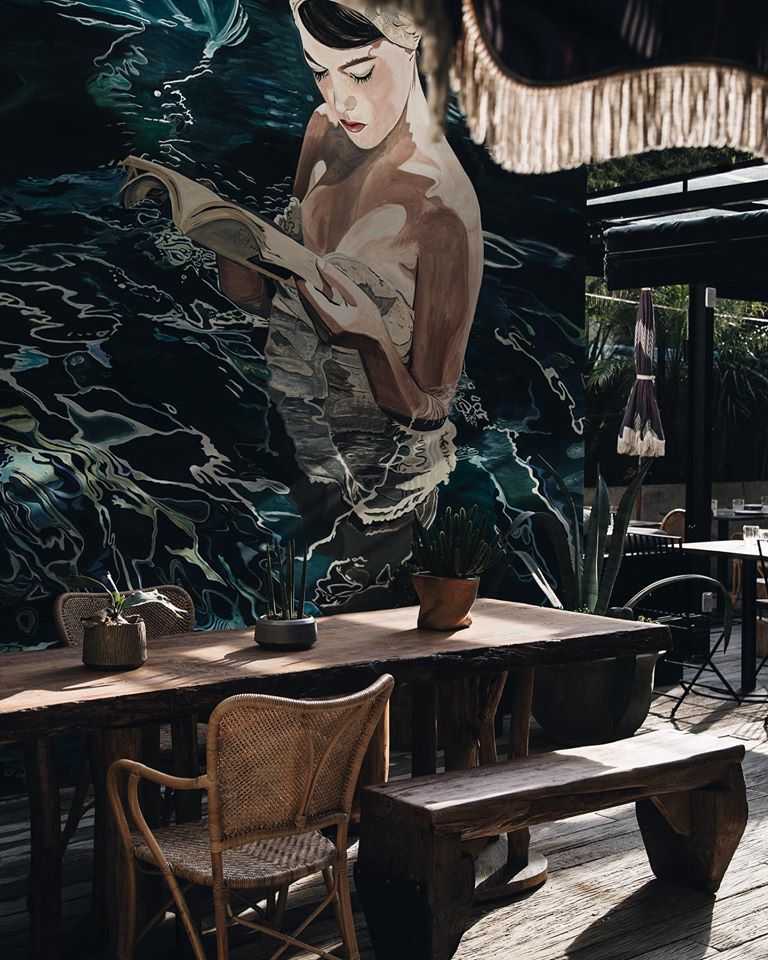 It’s not because the maze-like dining room looks like an ayahuasca induced pilgrimage into the wild desert garden. This is peak Palermo – cacti rise two feet tall from enormous artisan pots everywhere our gaze can see and diners look like they’ve been helicoptered in from the Nordelta. The menu is surprisingly long and has been thoughtfully layered with umami flavor combinations, unexpected dashes of acid and spice, and a disciplined eye for presentation that is becoming increasingly standard for new kitchens.

The philosophy of head chef Maximiliano Rossi, who got his start in Europe alongside Michelin-starred chef Mauro Colagreco before returning to flip dry-aged burgers at Palermo’s Big Sur, is on the cusp of what (finger’s crossed) awaits us over the coming years: blurred food borders, rounder flavors and a genuine appreciation for the country’s agrarian bounty. 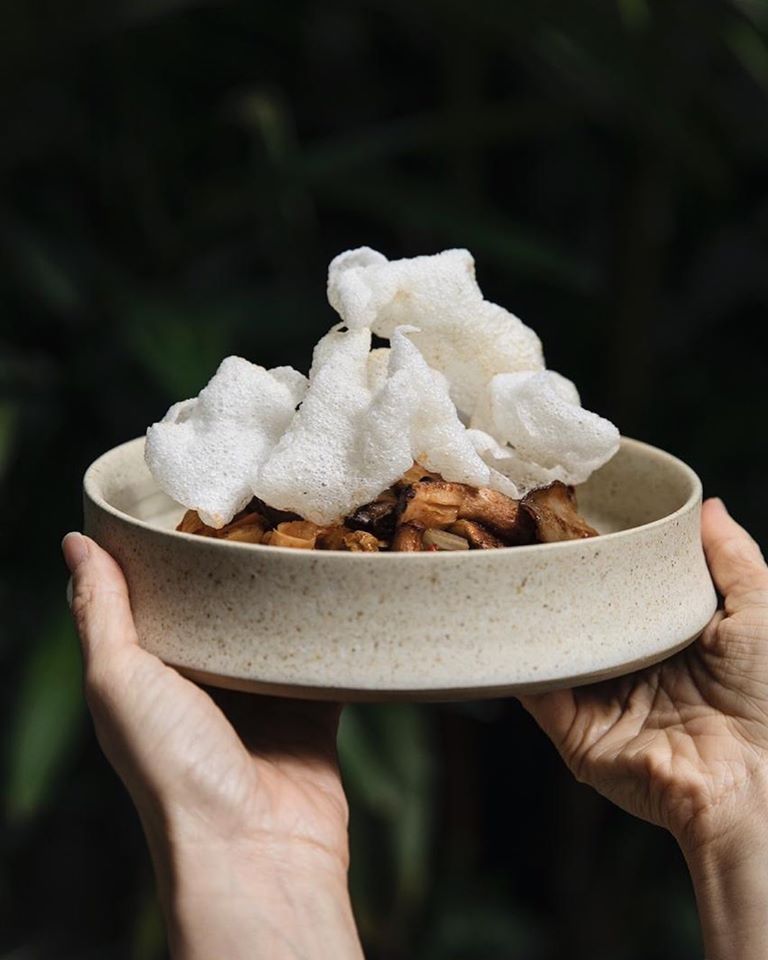 His cooking, if you pay attention to the world of restaurants, is that whose guiding principles come from the cookbooks of young New York City chefs like Ignacio Mattos of Estela or Jeremiah Stone and Fabian von Hauske of Contra and Wildair, playing with the seasonal simplicity of the Mediterranean and the lingering flavors of the East – a snappy fermented cabbage or earthy tahini sauce – while emphasizing the glory of unpretentious dishes plated like a starred tasting menu.

You could start with a plate of nachos. Thin triangles of corn tortillas and a chunky guacamole taste like a beachy vacation on California’s southern coast. Or an order of kimchi dumplings that are small enough to devour in a single bite and hit the tongue with a Korean tang and burst of ginger. Spices from the Levant loiter on the palate in a bowl of almond hummus and sour labneh. The panisse, a French version of the Italian faina, is delicately elegant. A microscopic crunchy skin binds tightly around a gooey inner chickpea dough more reminiscent of a perfect french fry than a thick cake of faina. A citric leaning tahini pulls the dish upwards to a lemon heavy artichoke and chewy chunks of apricot that pop with the tang of a wet caper.

Barbacoa tacos replace slabs of goat for chunky cuts of cauliflower – the bites of an acidic tomato and vinegar-based marinade recall the tastes of a Mexican taco stand all the same. An acidic kimchi sets up shop at the back of the throat while sweet notes of plum and hits of orange slide over slices of wild mushrooms and whole pieces of ginger that crunch and crack like crushed ice. Creamy sweet potato is layered with touches of sweet, spice and acid flavors that take turns on the tongue. They are wonderful on their own and better when mixed together.

A comprehensive list of natural and organic wines are more bubbly and acidic than their traditionally produced counterparts. Try a Pinot Noir by Barda, fruity with a crisp finish, or a tart Rosé by last year’s star winery Pelihueso. Cocktails are clever riffs on the classics, like a heavy boulevardier with a touch of café or a sour with a hint of passion fruit and pomelo. Don’t hesitate to ask for an off the menu request, like a dense Rob Roy.

For dessert, you are going to want to order the chocolate mousse with sea salt and an horchata-like peanut ice cream, or the citrus-drunk key lime pie flavored lightly with avocado and heavily with a condensed coconut milk. Or maybe, even, the classic approach of a trio of ice creams – hazelnut, chocolate and sour orange – while you contemplate the future of plant-based food and cross every appendage that it resembles something like the quiet genius you just devoured.

Hours: Sunday through Thursday noon to midnight, Friday and Saturday noon to 2am