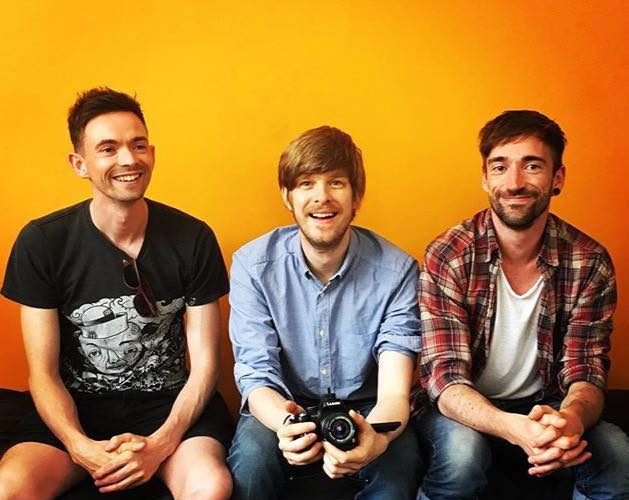 Distant twinkly guitar riffs greeted me as I made my way into the fray of Niceto Club. With homemade TTNG t-shirts to my right and people dancing in odd time signatures to my left, I knew I was at one of Argentina’s most feverishly anticipated concerts of the math-rock scene.

The UK group finally arrived in Argentina after several mishaps and rescheduling with the help of Juan Godfrid and Diego Fraga from Anomalia Ediciones, the production company that has made it possible for several international bands from the math-rock, post-rock, and emo scenes to play shows in our country. Last Thursday, the Argentine audience had the opportunity to witness the Oxford trio’s dazzling display of musical prowess for the very first time.

Before TTNG could even strum a single chord, I had the privilege of speaking with drummer Chris Collis who told me that they were pumped to be playing South America. Chris was super transparent about the new album they’d be working on as soon as they got home after wrapping up their year and a half tour in Brazil.

Hailing from Rosario, Forestar kicked off the gig with their trio format made up of two guitarists and drummer, but — surprisingly — no bassist! They were those responsible for the twinkly tapping guitars that had greeted me as I arrived.

Not long after Forestar left the stage, long-running math/emo-rock outfit Archipielagos served as a hefty appetizer to our English visitors. The yearning and intertwining guitar passages paired with pummeling drum flourishes had me giddy with anticipation, and the singer’s visceral screams and melodies conveyed the angst portrayed in the lyrics. They were opening for people they admire and they played accordingly.

A huge curtain covered the stage, and impatient feet hastily made their way to the front, cramming into every available bit of space they could find. A sudden curtain drop and a fervorous scream finally revealed what everybody had been waiting for. Singer and guitarist/bassist Henry Tremain uttered some words of gratitude before introducing the very first song of the set: the classic Animals album opener “Chinchilla.”

The musician in me couldn’t help but admire the level of technical proficiency on display. Without skipping a beat, the propelling drums, intense guitar lines, and Henry’s crystal clear voice converged as a collective scream sang the opening line: “So far, we’ve lost focus…” It was happening.

From that point onwards, song after song reverberated within Niceto Club with bopping heads and syncopated handclaps galore as far as the eye could see. Rarities such as “Pig” and classics like “Cat Fantastic“ were played with equal levels of expertise.

Henry’s masterfully dry humor caught us by surprise. Of course, it was clear that most public interactions came as a consequence of guitar re-tunings to fit certain songs, but the audience ate up the way the lead singer managed to parody the behavior of international bands. I kept thinking to myself: “If, god forbid, this dude had to switch careers, stand-up comedy would be a strong option.”

The band took a few minutes to give a shout out the sound guy, who’d been doing an astonishing job mixing all the instrumental density that TTNG was laying on all of us math-rock enthusiasts.

Slowly and steadily we arrived to the night’s emotional peak with “Whatever, Whenever” a song off their latest album, Disappointment Island. The song’s lyrics are a heavy look into depression and that nagging feeling that we’re all just biding time for the next worst thing. The contrast between the words and the upbeat instrumentation crescendoed towards the strident and distorted outro that swallowed the venue whole in a collective pull to our heartstrings.

With nothing but words of gratitude, some jokes thrown in for good measure, and a few song dedications to random people in the crowd that seemed to be rocking out hard enough to earn it, TTNG closed their set with the classic “26 is Dancier Than 4.”

That was it, the maelstrom of notes and heartwrenching melodies had come to an end. Some people who were still manija (like me) chanted for one more song, but there was no encore.

I left Niceto Club teary-eyed, remembering how I had stumbled into TTNG surfing Youtube during one of my many full album binge-listening sessions off the recommendations sidebar.

I was teary-eyed not because it had ended, but because a few minutes ago they had begun laying the groundwork for many other icons of the incipient math-rock scene to have a space in Argentina, to become as recognized and valued as a music genre as any other.

TTNG delivered a breath of fresh air in these hot and humid summer nights, as well as a bastion of hope and inspiration for all of us twinkly-guitar-loving and polyrhythm-craving loonies.