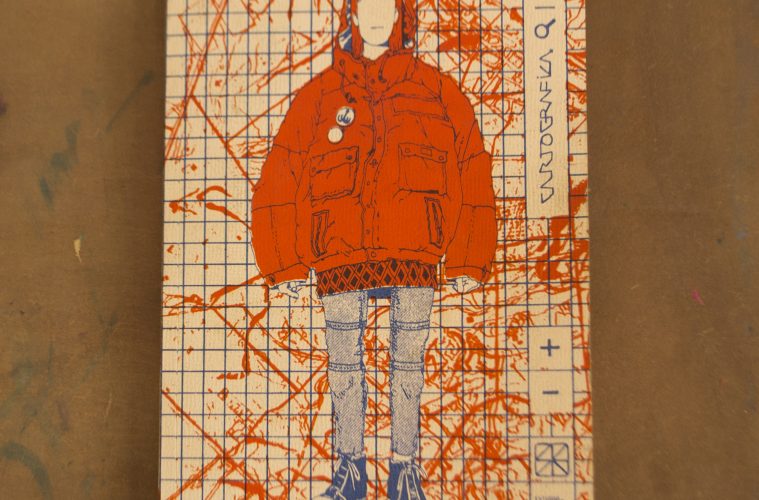 Greetings! And welcome back to Ltd. Edition, this small corner in the La La Lista universe dedicated to smearing our thumbs with ink as we traverse through the world of the independent Argentine comic book scene. With a fresh new year upon us, and coming out of the post-New Year’s hangover, it would be an ideal time to take a look back at the year behind us and take stock of the best material that came out in 2019. However, I’d rather use this space to highlight some great stuff that came out at the tail end of the year; stuff I liked so much that it would feel wrong to not give it its due in this column.

Cartográfica is the title of the debut graphic novel by “El Sike,” the pen name of illustrator/animator Facundo Cobbe, released by the independent publisher Estudio Mafia. The book, as a physical object, serves as the perfect marriage between a bold print quality (silk screen as a technique for image reproduction is very volatile and hard to master) as well as a high level of illustration and design adapted by the author to the two-color format.

We could keep talking about the material aspect of the book, and how hard it is to obtain the technical quality present in Cartográfica, or the importance of independent projects of this nature; however, this would be tantamount to putting the work itself, the stories it tells and the ideas it puts into the readers’ heads, on a secondary plane. In actuality, if there’s one factor that makes the experience of reading El Sike’s work especially memorable and transcendental, it’s the magic that it generates as it ties complex concepts and ideas with the visual poetry of its illustrations and page layout. But let’s start by talking about the book’s plot.

The book literally begins with a stain. As you look closer, it mutates into a personal map of the city of Buenos Aires. The narrator and protagonist is a person who, after living a nomadic childhood in different cities in Portugal and Barcelona, returns to their hometown of Buenos Aires. At first glance, Cartográfica is the story of the relationship between a city and a person who lives in it, as they become acquainted with its geography and history as well as its other inhabitants.

At the heart of the story is a simple (but beautifully explored) concept: the relationship between the concepts of a “city” and a “body.” The city as an entanglement of pathways that form its shapes, the relationship between the material nature of the space and how our bodies explore it, its hostile areas, the illusion of comfort in the familiarity of the paths we explore every day, and the mysteries that hide throughout. Along its pages, we are privy to the protagonist’s view of how the city molds their emotions, memories, and experiences.

Many philosophers have found that walking unfamiliar trails is a great way to develop their ideas about the world. Similarly, Sike finds his exploration of the city to be the ideal scenario to ponder the machinery of the world, and the role that geography occupies in our memories. This relationship between body and city is a great foundation for an exploration of ideas and observations about the human condition, which takes us through transhumanism, technological advancements, the cyborg movement, and the mechanisms of control and oppression of the state. These observations are set against the backdrop of a city that’s seen an innumerable amount of demonstrations and violent clashes with the city’s police.

This group of concepts may sound dense or even tedious, but the way they’re explored is loose and effective. The author alternates passages where the narrator takes us through a kind of TED talk as they examine concepts, clearly laying bare the author’s own obsessions, while in other instances these existential ruminations appear as protagonist daydreams through the streets of Buenos Aires or listens to music in her room. The book manages to avoid feeling preachy or didactic, instead inviting the reader to examine these various possibilities and concepts.

And in the midst of this search for a thread that will help us understand all that’s around us, there is also a healthy dose of abandon and thrills both mainstream and alternative. We don’t know much about our protagonist, but her walks reveal to us ghosts of an old love story, and friendships that overflow with laughter. Her urban exploration takes us to decadent dive bars with loud music and intoxication, as well as the tensions of finding oneself in the middle of a political manifestation as it explodes into chaos. The intervention of the armed forces, the bitter taste of police violence, the smell of tear gas in Plaza Congreso. The forever present struggle of claiming a space for social manifestations in a crowded urban center.

After an extreme dose of experiences and ideas in what feels like a very short time (told in a little over 100 pages), as well as an incredible and dream-like climax, the possibilities are limitless. For the protagonist, the conviction of living in the present, of staying alert and diving into unknown places in full defiance of the notion that one ever fully knows the place one lives. For those who’ve traveled through the pages of Cartográfica, an invitation to re-think everything you knew about the city you live in. Whether you’re a new arrival or someone who’s spent a good amount of time in the streets of Buenos Aires, an invitation to reinvent your relationship with its streets and people. An invitation more than worth accepting.