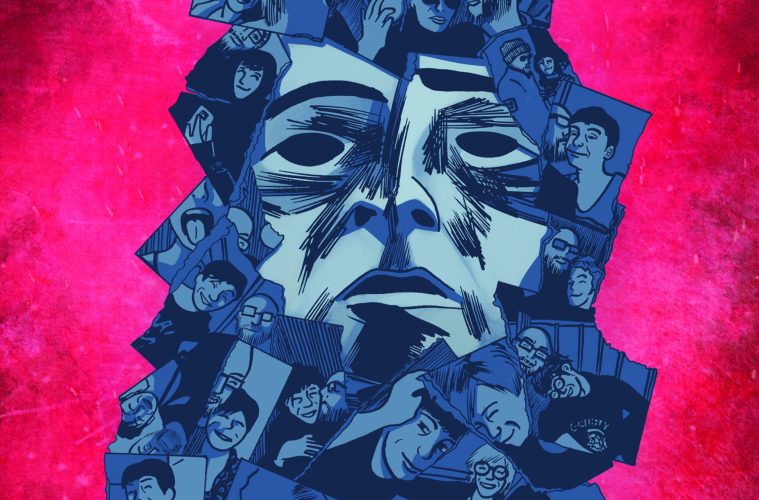 Hello and welcome to the last Ltd edition column of 2019! We’re gonna leave the balances and best of the year lists for another time, because the Argentine indie comics keep coming and in the last month there were a couple of releases that deserve to be reviewed. In this edition, I will present a book published last November, a logbook of sorts that documents personal exploration and growth amidst relationships, music shows, and trips.

El Mundo Extraño is an autobiographical comic book published by Szama Ediciones, in which its author Loris Z tells us about his personal experiences during 2017 focusing on two simultaneous aspects: the back-and-forths of his emotional/sexual connection with someone he met after ending a long relationship, and his connection with the band El Mató a un Policía Motorizado, La Plata’s indie wunderkind. Both on this book and on his previous one, Diario (La pinta, 2013), Loris Z uses this medium as a person logbook. On Diario, the book is born out of a self-imposed habit, illustrating in 4 daily comic strips, 5 days a week, the back-and-forths of his daily life. El Mundo Extraño, on the other hand, presents itself as a more cohesive work. Loris’ looking glass is always on his emotional state, showing how it affects, for better or for worse, the things that happen in his life, be it going to a show, planning a trip for years, or an emotional relationship.

Throughout its pages, the author unfolds the connection between the protagonist and Carolina, as well as his relationship with El Mató a un Policía Motorizado’s music. The live shows that the couple shares throughout the book, and the relationship between the protagonist and the band’s latest album (La Síntesis O’ Konnor – 2017) are the driving force behind the story. In between, there are comic events, friends, a trip to New York, buses between Buenos Aires and Rosario to try to salvage a long-distance relationship… basically, life itself. Even though relationships (and books) can be understood as a story with a beginning, a middle, and an ending, the underlying plot are a person’s daily struggles with their demons and the balms they find or make up to overcome existential pain and enjoy life. “The mosh pit  is our salvation” is a mantra that Loris repeats in various parts of the book, and that sums up that vital energy in his favorite band’s live shows.

Loris’ drawing style is effective not just because of its expressionist style and his way of synthesizing faces and figures with very few lines, but also because of his choices in terms of composition and his ability to generate images that condensate the emotional value of the different moments in the story. There’s a poetic quality to the images that, accompanied by the text, help understand the evolution of the protagonist’s voice throughout the book. When to illustrate using a photo as a reference, when to fill the page with black, when to illustrate small figures in a minimalist way is a skill that Loris Z uses almost like a second language. Perhaps the only thing absent from the story is the voice of the protagonist’s emotional counterpart, and this is something that the author makes evident towards the end of the book, deleting Carolina’s words from the final argument. Partly, this could be due to an intent to give the story some privacy or vagueness but on the other hand, you could see it as a declaration of subjectiveness inherent to an autobiographical story, especially one about relationships.

Comics are a medium where autobiographical stories gain a peculiar strength. The relation between text and image generates a sense of immersion that makes this particular art form feel penetratingly true. Regardless of how much you like the autobiographical genre, it’s always good to reflect about the limits of veracity within the story, to think about it as fiction and not so much as the author’s truthful document. In other words: I don’t think it’s of vital importance to know if what I’m reading is accurate, but how the story affects, intrigues, and questions me as a reader. El Mundo Extraño is, luckily, a story I could relate to emotionally and at a generational level, as well as a testimony to all those who find solace in music shows or friends, clinging to that while everything else falls down, or to anyone who processes emotional mishaps as a turning point in which you can find yourself in spite of the pain, no matter how many times you break your glasses in the fight, or break your heart.