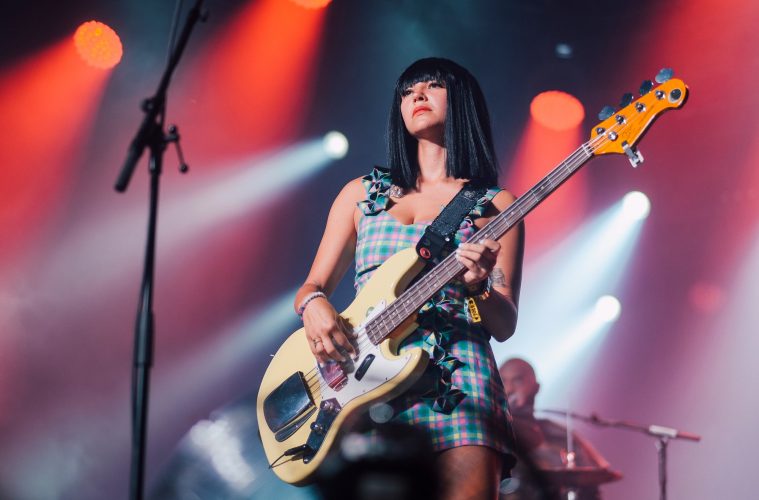 I’m back and better than ever! I’m finally in good health, for the first time since June, and here to cater to all your live music agenda needs. (Well, half of them, my colleague Eze will be taking over this column two weeks out of the month from now on.) Hope y’all are enjoying the weather and making a hasty emergence from Winter depression. Here’s our live music recommendations for the week:

Tonight at La Tangente, cordobesa artist Candelaria Zamar will present her sophomore album Una Linterna (produced by Ro Stambuk, Matias Cella, and Candelaria Zamar) accompanied by her band: Guille Salort on drums, Brian Taylor on guitar, Francisco Azorai on keys, and Melina Moguilevsky and Esmeralda Escalante singing backup. Trained in classical and contemporary music, Candelaria explores the possibilities of combining electronic music, folk, and pop, with intriguing and unexpected results. One of the singles from the album was featured in our August Monthly Music Roundup.

This event, organized in collaboration with Mercurio Disquería and Elefante en la Habitación, will involve live music (obviously) and special promos in the record store that sells Argentinian and independent music. Barbi SocAnonima will be playing a set with Fonso, and we’ll hear music from Maca Mona Mu, an artist whose recent album Kalanchoe was featured in last month’s Monthly Music Roundup. Multi-instrumentalist and singer-songwriter Ignacia, and funky bassist and composer Lu Martínez will also grace the stage. After the show, DJ Tomate Miramar will be spinning canned tunes to dance to.

Paula Trama’s project Los Besos are presenting Matemática Sentimental, their fifth album, and will revisit songs from their entire discography, this Friday at Xirgu. Matemática Sentimental is an album that is at once an anomaly, pop, classical, and cancionero. It moves between the strange and the usual, reuniting old formulas of musical vapors, quotes from mountain voices of various continents, and brilliant surfaces of unknown rhythm. Anti-establishment power duo Bife has been invited to open.

After hitting up Niceto and La Bienal, Los Pibes del Espacio are closing out the year with a show at La Tangente. Presenting their most-recent sonic evolution, which connects synthetic ambience with hues of rock and pop, Los Pibes will set up 15 old school televisions that transmit and process what happens on stage, for a full-blown hipster audiovisual interdisciplinary experience. Opening the evening is Estupendo, a duo who, between the two of them, operate guitars, programming, keys, voice, drums, bass, percussion, clarinet, and visuals. Click here to get your tickets online.

Citrus friends of the funkadelic Vulfpeck-inspired band Pomelo Rosado are invited to their last show of the year, this Saturday at La Confitería. Cyclos will be opening, and it’s gonna be an awesome SPICY way to say goodbye to 2019. Following this show, Pomelo Rosado will be locking themselves away to record their debut studio album, and they won’t be playing again until the album release show, so don’t miss it.

Sesiones Colmena is an audiovisual ciclo hosted by Radio Colmena, that combines live music and live interviews. This year, they’ve teamed up with Casa Sofía, opening the doors of a warm and intimate space to continue enjoying together what we all like the most: music. This Saturday the session’s invited guests will be one of our favorite bands, Gente conversando. Drop by to witness a wacky and wonderful live show, and get to catch Gente Conversando…um, be, literally, gente conversando (people conversing).

The avant-garde jazz of BADBADNOTGOOD and contemporary funk of Khruangbin are making an appearance in Argentina this Sunday at Teatro Vorterix. BADBADNOTGOOD is a young and talented trio of musicians consisting of Matthew Tavares on keys, Chester Hansen on bass, and Alex Sowinski on drums. Since they studied music performance together in college, they’ve been rewriting the rules of improvised instrumental music and bringing the jazz tradition into the future. Khruangbin is a psychedelic trio that draws inspiration from music history: mixing the funk essence of 1960s’ Tailand, Persian rock music of the 70s, and 1980s Algerian symphony vibes with disco and soul.