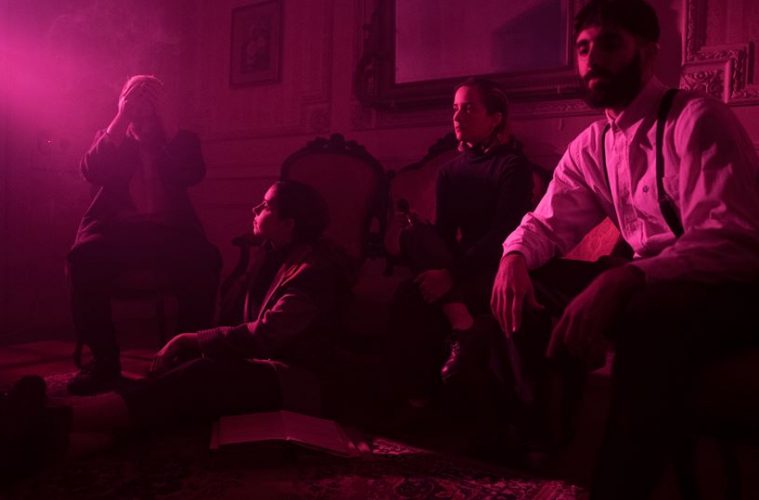 Hey, you! Are you ready to get your SPOOK on this week? Halloween is just around the corner and even though it’s not that widely celebrated in Argentina, here at La La Lista we’ve been carving pumpkins, stirring our cauldrons, and making scary-good playlists. A word for the wise: trick or treating in Capital Federal might not be the best idea, so don’t say we didn’t warn you! But do you know what IS the best idea? Going to see some shows!

Panchito Villa is no stranger to the Argentinean indie scene. In fact, even though he hasn’t released his debut album yet, he’s been filling up some of the most popular venues in the city for the last few years now. This is, of course, due to the new wave of dreamy-pop artists who seem to have taken the music scene by storm. If you wanna ride the wave secret: there’s a listening party happening and YOU can be part of it. Before its release, head down to Mercurio Disqueria and get to listen to Panchito Villa’s debut album along with Gativideo (funky pop and 90’s-injected nostalgia in the form of a band) who’ll be playing some songs. Best part? Totally F-R-E-E, friendos!

If you’ve never heard of Chelo Lares then you’re definitely missing on one of the cities most nuanced Kraut/Space Rock artists around. In only a few minutes you’ll be instantly transported to wherever Major Tom is now. If that is not enough, they’ll be joined by Fausto Stoneich, who played drums in bands such as Flores de Sinaloa and will something different to the table in a night that’s the PERFECT excuse to cut the week right in half and get that much deserved breather you, dear reader, oh so desperately need. And, again, following the last event’s trend, this is totally free, people!

Okay, screw it, we’re just gonna say it: we friggin’ LOVE Violenta Josefina here at La La Lista. If tenderly destructive sounds like an appealing quality in music or… people? (no judgement here bb), then Violenta Josefina’s dreamy tunes will strike your fancy for sure. The way her voice is layered with the rest of her instrumentation is simply astonishing and UH the synth lines. Give her a listen and let us know if we’re totally wrong (we’re not). This one technically “FREE” but not really cause it’s a la gorra, so if you’re not a total buttface you’ll throw down a couple hundies for the band. See you guys, gals and ghouls there.

Well, if this isn’t a fecha that covers every possible human emotion I don’t know what emotions are. My ex would definitely agree with that last phrase but hey we’re not here to talk about my relationship mishaps…moving on. Funes El Memorioso, whose’s album Jardin Infame is a crazy rollercoaster ride of Jorge Luis Borges references and chillingly beautiful melodies will be playing alongside Lou Baumann with his almost Elliott Smith-ean western-tinged folk songs and De Incendios, a melancholic dream-pop group who’ll help you space out into a pastel-colored dimension. All this thanks to the folks from Fuego Amigo Records.

It’s time to get your emo, math-rock and post-rock fix, people. I’m gonna go off on a tangent and confess that I’ve been an ardent lover of these musical genres for quite some time and it fills me with joy to know that our local scene is slowly and steadily letting them flourish. Forestar, who’ve recently released their self-titled debut earlier this year will be sharing their melancholic twinkly goodness with one of the best (if not THE best) post-rock bands in the country, the peeps from TOTS (Transmigration Of The Soul) who are making some waves after their EP el tiempo pasa más rápido en la montaña. And last but certainly not least, veterans of the scene Archipièlagos will follow up on the release of their debut with a live presentation that will surely go down in the history of the local math/emo/post rock scene. Thanks to Anomalia Ediciones for organizing a hell of a show!

If a folklore-tinged fever dream is your idea of a great Saturday night then we’ve got just the show for you. Juan Perez – a super underground and up and coming artist that manages to meld the world of Argentinean folklore music, electronic beats and psychedelic mojo into one consistent album – will be presenting that very same album along with La Gran Yoguineta, reggae-influenced (ok, maybe a lil bit of ska) band that’ll get you dancing like it’s Saturday…CAUSE IT IS!

One of Buenos Aires’ most influential bands Ex-Colorado will be once again blessing the stage with their reverb-y goodness, and this time they are not alone. Hailing from Mar del Plata, Buenos Vampiros will also be playing their catchy choruses, dark lyricism and driving bass lines. Both bands bring to the table their own, unique mixture of dreamy and fluffy soundscapes and atmospheres and it really makes us giddy knowing that these two bands will be sharing a fecha! We’ll be there, will you? Make sure to get there early.