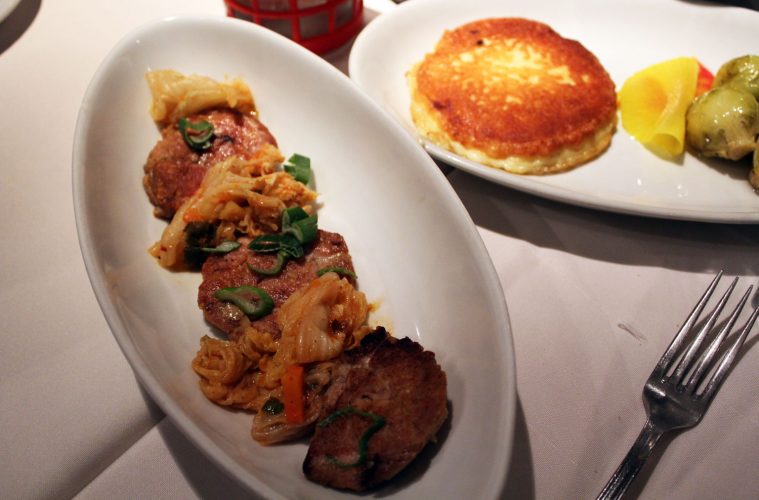 Let us concentrate for a moment on the intense presence of offal at the Argentine asado. A proper gathering of red meat hedonists would never be complete without dark brown blood sausages, preferably bursting from the confines of their casings, or long strands of chinchulines that keep the sizzle of the fire constant as it releases its inner I-don’t-wanna-know-what. Friendships have been tested over who gets stuck with a grey bite of lukewarm rinon, and at the butcher shop, sweet breads are as luxuriously priced as a cut of rib eye.

But the entrails, celebrated as they are, are almost exclusively enjoyed in the city’s innumerable parrillas. Sesos, or brains, are occasionally hidden inside raviolis at die-hard pasta restaurants, or liver might be found frying in a pan with garlic and parsley. Pâté was brought back into vogue at Anafe and 13 Fronteras offers a seasonal menu where you might find a plate of bull’s testicles marinated in leafy herbs. But these are exceptions to the rules.

At Urondo, however, the critical dish is definitely the organ meat.

This quiet corner cantina buried deep in the trenches of Parque Chacabuco has been a chef’s favorite for more than a decade. Gonzalo Alderete Pagés of El Santa Evita has proclaimed it as his never fail restaurant, and Naiara Calviño, previously of Chochán and currently the co-owner of the city’s only serious spice shop Nave, has been known to host pop ups here.

To get to Urondo, you will most likely have to zig zag through the city and into the thickest corridors of central Buenos Aires, dive into the neverending traffic of Caballito, fly under the freeway and into the rows of darkened homes of Chacabuco. And then suddenly, you find yourself at this sparsely lit corner where Javier Urondo, owner and head chef, welcomes you inside his open kitchen bistro. High ceilings, checkered floors and a never ending display of wine make the restaurant feel like it has been here forever.

But Urondo is more serious than your average porteño restaurant, with its palate influenced not only by the immigrant communities that built Buenos Aires but the ones that continue to do so: Peruvian flairs in the form of bright yellow rocoto sauce or sucker punches in the form of acidic Korean kimchi.

There is an aggressively fatty entrecot, aged for 15 days and exclusively served medium rare, and a heavy cube of cuadril served with carefully seasoned mashed potatoes. A perfectly browned circle of provoleta begins to stray from the classics with the addition of pickled brussel sprouts and delicately sliced yellow beets. Sourdough bread, toasted just so, replaces the usual crusty white baguette. A Mendoza pinot noir by Laureano Gomez is more bodied than its Patagonian counterparts and a welcome opening to a meal.

The stars are the selection of offal, despite being relegated to the appetizer. I like to order a few en lieu of a main. Crisp sweet breads served with soft mouthfuls of barely red kimchi cabbage. An off-menu plate of brains are soft and airy with a heavy fragrance of garlic. Smear them across fresh bread like pâté; they are earthy and taste like a hint of a winter storm. Chinchulines are extra crunchy, maybe too crunchy, and served with a warming mustardy hot sauce and baked potato wedges. A Cabernet Franc reserve by Carmelo Patti intensifies the intense beef flavors.

For dessert, don’t think twice about a warm budin de pan. It is the best you’re likely to find in all of Buenos Aires.

For most of us, Urondo is a journey. Once you are there, just go for the ride.