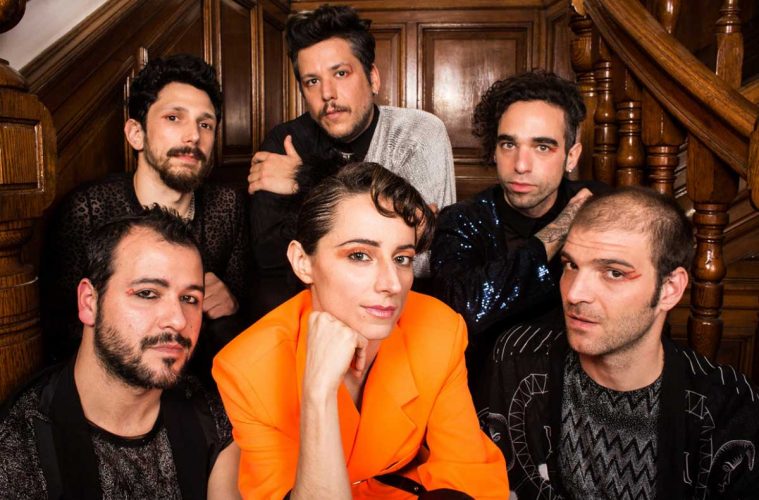 Welcome, friends, to another Monthly Music Roundup. An election cycle finally comes to a close, and though it’d be nice to imagine this representing the end of a period of stress and anxiety, things aren’t ever quite as simple as that when you live in this ever-exciting country. There’s a whole array of brand new headaches to navigate, but thankfully we have a whole bunch of excellent new music to help us do exactly that.

Remember:  we pick our favorite new tracks every month. To check out our selections from previous months — and you really want to, because they’re honestly great — click here!

In the epic album closer, “Limeña,” Los Besos invite us up the mountain to hear a romantic tale where clouds take the shape of long-lost loves and altitude sickness is nothing but a side effect of heartbreak. Starting off with skeletal drums and a simple synth melody, the song quickly picks up and locks into a groove that sets the tone for Paula Trama’s evocative lyrics. Sharp and poetic as ever, she delivers lines like “this moment is free of time, and turns to dust in a kiss,” perfectly capturing the frailty and immediacy of a short-lived infatuation that will remain in the listener’s subconscious, like specks of dust in the light of memory.

We take a little break from our usually indie-rock-focused list by highlighting a release that sits comfortably within the “Argentine folklore” genre. Duratierra has been around for over a decade, having released three critically-acclaimed albums and making a name for themselves in the world of Latin American popular song. Their new EP Trinchera, Vol. I brings certain rock elements closer to the fore, anchored by Micaela Vita’s expressive and powerful voice. The title track is an absolutely lovely, lushly-orchestrated jaunt through the Argentine countryside.

A year after the release of their self-titled debut, Justo Antes de La Guerra con los Esquimales join forces with Mi Amigo Invencible’s El Principe Idiota in a melancholic yet optimistic dreamy pop ballad. The track creates blissful poppy soundscapes with longing guitar lines and almost mantra-like lyrics about weekly struggle,  while at the same time delivering almost giggle-inducing lines such as the detached “this is my era, don’t break my balls”. El Principe Idiota adds nuanced vocal lines and inflections into the dreamy, reverb-heavy mix, making it clear that the Justo Antes guys know how to choose their features. We are looking forward to hearing from Justo Antes in the near future, whether this single is a one-off or part of a future LP. For the time being, don’t break our balls.

“135” is the sixth of ten tracks on Porque Lo Digo Yo, the second studio album by Daiana Leonelli. Some people go through life waking up each morning not feeling like they want to die. Others spend their whole lives wondering… “how??” The latter group will identify with this song, and brutally so. They dream of being okay, like really okay; sometimes they can even fool themselves and the people around them into believing that they are okay. But only for a while; there’s always another relapse lurking around the corner. Sonically and structurally, the track embodies this cycle — but rather than painting a dark and grim mood, the music offers us a much more complex, beautiful, and accurate interpretation of the sentiment surrounding it. Living with depression no es tan facil… but it is possible. 1-3-5 is the suicide prevention hotline number in Buenos Aires; its automated voice mail reception is sampled in the middle of the song.

Nicolas Sorin is a musician and producer with a long and acclaimed history in the industry, having worked with some of the most important names in Spanish-language pop music (such as Alejandro Sanz, Shakira, and Miguel Bosé). Aside from his background as a pop producer, he also has a background in jazz and classical music. With his solo project, he explores the darker and more esoteric edges of his musical interests, employing complex rhythmic patterns and experimental elements. “Invisible” builds with hypnotic keyboard and guitar lines over choppy drum polyrhythms and oblique, expressionistic lyrics that fit the song’s mysterious, foreboding mood, itself giving way to a brighter, more hopeful sound.

One of our favorite things about experimental folk act Los Aullidos is that they always sound like themselves. This is no minor feat in age where the sheer quantity of new music and its instant access tempt many up-and-coming bands to fall prey to imitation or hurried, half-baked releases before they’ve properly plotted and mapped the axis of their own sound. But Los Aullidos are in no hurry, and we’re so grateful for that. Their latest release “Los Dias Son Nuestros” is a slowly unfurling banner of a song that dances in the breeze of a perfect spring day — at times sprightly, suddenly changing direction, and at others languid and bathed in sunlight. What does the banner stand for? Optimism, friendship, love, and solidarity. And considering the year we’ve had, that’s a message we can get behind.

Diosque‘s new album Terruño is a psychedelic hodgepodge of studio sounds and synthy wizardry, managing to recall artists as diverse as Prince, Fleet Foxes and The Flaming Lips at various points. The second track, “Vuelas Cerca”, is a breezy, laid-back love song built around droning vocal harmonies and sounds that drop in and out like faulty transmissions from a faraway planet.