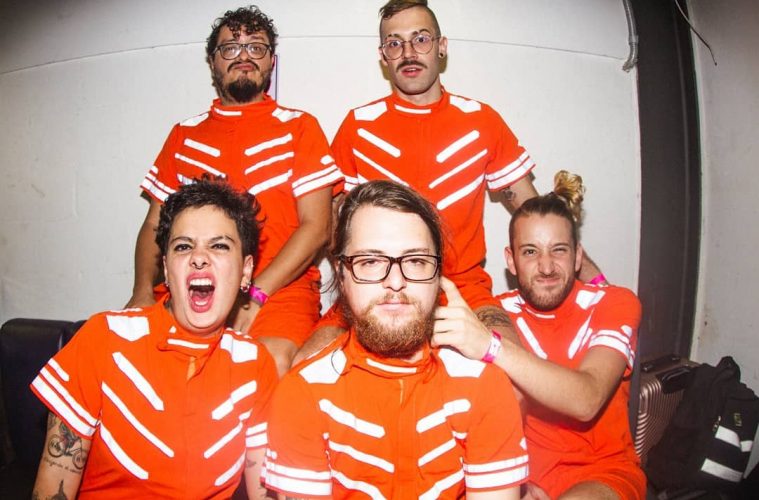 The lights went out and all of a sudden there were neon jumpsuits jumping across the stage, an onslaught of orange flashes. The short walk to Niceto had lured me out of my house and I had been envisioning a mellow, slightly rock-leaning Wednesday night indie band, similar to the preceding Paula Maffia and Lucy Patané acts. As I watched the five-member band smash into their places, the three Brazilians I had come with looked at my wide-eyed pause with amused smiles. It became clear there’d be no light swaying, no casual finger-side-tapping; we were here to move. They were here to move us.

The set began with a song that I can only describe as a poppy mix between a sort of cumbia, Cuban son montuno, tropical feel with a little bit of rap thrown in. Francisco, el hombre is the kind of band that sheds their musical skin frequently, having already gone through several evolutions of their sound. This past August they toured Argentina presenting their latest album, RASCABEZA. While this album has a more techno heavy, experimental, electro-punk vibe, their earlier iterations as a band feel much more traditionally folk-poppy. They are a group that bends, (physically) but also through normative definitions, blasting outside of specific genres, playing around with gender norms. You can feel in their music an urgency to be political, to be bold in their stances against the injustices of Latin America. And in doing so, they create necessary spaces for those living in these areas, their fans, in a time of failing economies and military attacks on protesters.

From the beginning of their set to the very last song the venue surged with an energy that so palpably radiated directly from these five musicians. They played around with each other, they played with the audience, and most notably they forced us to play with one another. They wanted us to get to know one another, calling us after a few songs to form a river amongst ourselves in the crowd. Each of us was to take one small step backwards, and another, and another, until the audience split, leaving a clear walkway down the middle where frontman (and one of the two founding brothers of the band) Mateo Piracés-Ugarte leapt onto the floor. From there we formed a dance circle, facing strangers, looking each other in the eye as the beat kept picking up. When the drop of the song hit, it was clear what we had to do.

Mosh we must, so mosh we did, following his cues to “mix our smells” like orthodox worshippers praising the good lord, melding beer-stained t-shirts with our long-day-at-the-office-grime into one another.

I spent these first few songs backing away from the pit, guarding my small backpack with dear life, as the music transitioned into a slower rhythm. The only female in the group, Juliana Strassacapa, held the mic firmly as she called all women to the front. She brought out three singers, two from Perotá Chingó, and one I didn’t recognize. She repeated, “Women come on up to the front,” urging us forward as the men of the band began to kneel, falling into the background. Four women took the forefront, commanding the stage as they harmonized to “Triste Louca Ou Ma.” Arguably their biggest hit, written about Juliana’s mother and family, whose chorus repeats, “That man doesn’t define you, his house doesn’t define you, his flesh doesn’t define you, you’re your own home” began to still the room.

I stood, in front of the stage, surrounded by the other female fans listening to their resonation, to almost all of them singing along. It felt like just one of the moments on this musical trip I’d unintentionally joined. But this comedown didn’t last long, and only one song later we were being led back up with their drum heavy rhythms; this time we were pegando fogo (catching fire). We had clear instructions to follow, with a demonstration and all. This time our mission was not to mosh. We were here to dance.

Almost four minutes of these repeated moves had me feeling more like I’d gone jazzercising than concert-going, so the transition to their more politically weighted hits was welcomed with heaving chests. They played a song whose lyrics describe how “the dollar is worth more than I am, oooh… fuck” from their previous album Soltasbruxa, and another called “Bolso Nada- Liniker e os Caramelows” which essentially calls Jair Bolsanaro (the current president of Brazil) a scrotum. In the introduction to the song they made a point of saying that they wished Bosanaro had eaten some ass in his life.

“Because eating ass is delicious. And fun. And maybe if Bosanaro had eaten some ass, less people in Brazil would be suffering at this very moment.”

At the time we laughed, but I really do think it’s something to think about, however crude it may sound. If only all the governments of the world had someone eating their ass. Perhaps Chileans would be free to leave their homes past 9 PM. Perhaps they’d be able to express their civil disagreement with paying over 1/6 of their salary on transportation, or at the very least be free to protest without getting shot at by their military. Perhaps the peso-to-dollar ratio wouldn’t skyrocket post this Sunday’s elections. And perhaps the man in power of a nation’s international foreign aid wouldn’t be able to withhold funds in order to further his own political agenda. We’ve always thought that Marie Antoinette was really on to something, but I think francisco, el hombre said it better: let them eat ass.

As the night came to a close, Mateo came into the crowd again. This time we made a circle, the entire Niceto floor moving wherever they asked us. We were told to put our arms around the person next to us, preferably those we didn’t come with. We did so, some more hesitantly than others. He told us, in between lines, to look to the left and to the right. “Say hello and sway along,” he told us. “These will be the people who’ll be there when Macri gets out of office, when Bosonaro is done. They don’t represent us.” He repeated.

They don’t represent us.